BANGKOK -- From Thailand, to South Korea and India, polluted air has suffocated some of Asia's largest cities, pushing authorities to step up measures to fight smog and protect their people from harmful particles entering the human body.

Despite governments' various efforts to combat toxic air pollution, the situation is likely to persist as all of them face difficulties in balancing economic growth with improvements to the environment.

For weeks, Bangkok has not seen a clear sky. A combination of heavy traffic, construction works, the burning of crops, factory operations, coal-based electricity generation and almost no breeze have turned the air toxic. The most prominent pollutant in the city's toxic air, PM2.5 -- which has a diameter equal to or smaller than 2.5 micrometers and which can lodge deep in the lungs and cause respiratory and heart ailments -- has reached unsafe levels by the country's standards.

These days, it is not unusual to see people waiting in lines at pharmacies during their lunch break to buy face masks, like the N95 mask, which is designed to catch particles as small as PM2.5. But many pharmacies have posted signs reading: "We are out of N95 compatible masks." Local supermarket chain Tesco Lotus even gave away the masks to attract customers.

With a general election expected in Thailand by May, the junta government led by Prime Minister Prayuth Chan-ocha is rushing to take steps to improve the situation. A Royal Thai Air Force aircraft has flown over Bangkok to spray 3,000 liters of water in a bid to absorb the particles and clean up the air. In addition to deploying so-called rainmaking planes, a clutch of firetrucks has also been dispatched to spray water into the air. Prayuth is also seeking solutions to encourage motorists to use more environmentally-friendly fuels. 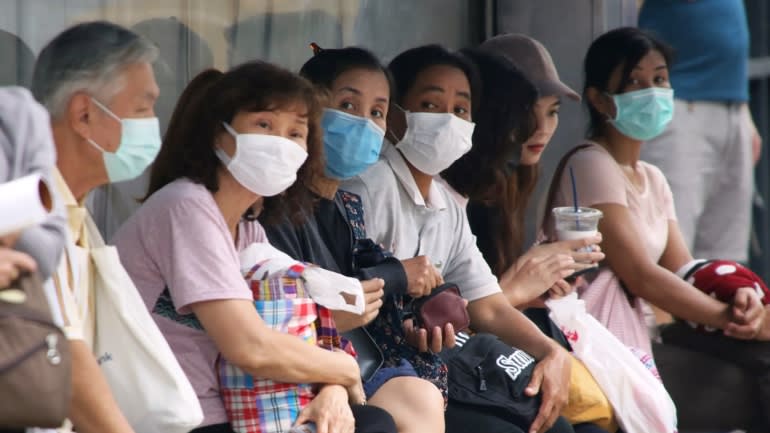 People in Bangkok wear protective masks as air pollution in the city has reached critical levels. (Photo by Kosaku Mimura)

Despite the efforts, the air quality has not improved as much as the administration hoped, experts have said.

"Spraying water could help with [levels of] PM10, but we would need 30,000 machines to spray water at the same time if we want to remove the PM2.5," said Sirima Panyametheekul, an associate professor at Chulalongkorn University.

PM10 particles are between 2.5 and 10 micrometers in diameter and are said to be slightly less harmful to humans as their bigger size makes them less likely to penetrate deep in the body.

Thailand is not the only country dealing with severe atmospheric contamination this year.

In South Korea, the government has issued dust particle warnings in many parts of the country including the capital Seoul, after air quality hit its worst level since 2015 when official recordings began. In one part of the city, air quality measurements registered more than 200 micrograms per cubic meter of PM2.5.

Seoul has implemented emergency measures to combat the record pollution levels. The country's Environment Ministry has prohibited some 320,000 old diesel trucks from entering the city. Parking lots at public institutions have been closed, with users advised to use public transport. Construction sites have been asked to cut their working hours.

India has also been struggling with toxic air pollution. The country has suffered from pollution for years, but the situation appears to be worsening. 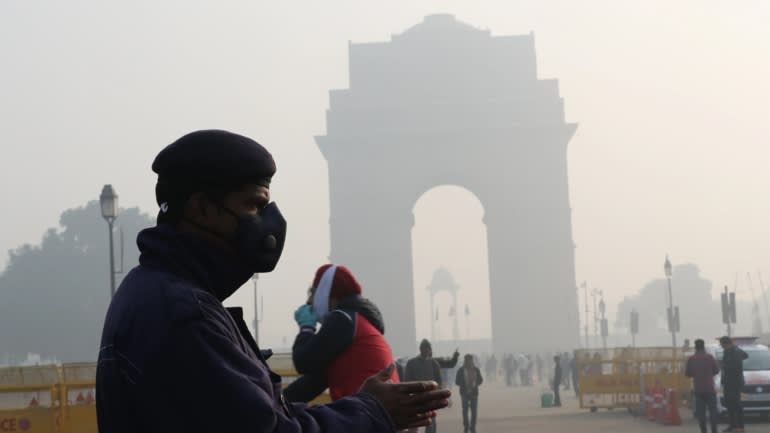 New Delhi's India Gate shrouded in smog. India has come up with a medium-term plan to tackle its toxic air pollution. (Photo by Kosaku Mimura)

With air pollution in the capital becoming severe, local politicians have likened the situation to living in "a gas chamber."

The South Asian country has finally come up with a medium-term plan to deal with the dirty air. Environmental Minister Harsh Vardhan last week set a national target of reducing PM2.5 and PM10 concentrations by 20% to 30% by 2024, compared with 2017 levels.

China is known to be a major source of dust particles, with its factory complexes spread across the country constantly emitting dense smoke. This has not only harmed some of its large cities, but has also drifted on subtropical westerly winds to reach South Korea and even Japan.

Air pollution is a serious threat to human health, potentially leading to illnesses such as pneumonia. The WHO has placed air pollution as the top priority of all threats to tackle in 2019. It estimated that nine out of 10 people in the world breathe polluted air every day. Dirty air kills 7 million people a year, the UN agency said.

Air pollution is already hurting Thailand's economy. The Kasikorn Research Center estimated that smog would cost the country up to 6.6 billion baht ($200 million), by raising healthcare costs by up to 3.1 billion baht and reducing tourist spending by up to 3.5 billion baht. Meanwhile, spending huge amounts of money on measures to fight pollution will divert funds that could be allocated to fostering economic development, such as infrastructure.

Governments face a difficult balancing act between reducing pollution and boosting their economies.

"To tackle the problem sustainably would be to tackle [the problem] at source," said Kirida Bhaopichitr, director of the Thailand Development Research Institute Economic Intelligence Services. In Bangkok, encouraging people to use public transport or shared car rides would be a priority, she suggests. In industrial areas, installing pollution reduction or trapping equipment could be a solution. People could refrain from burning crops for land preparation in rural agricultural areas.

"These measures may come at the cost of slowing some economic activities in the short-run, but would yield benefits in the long-run," Kirida said. "On the other hand, their costs to health care and labor productivity will be large, if the issues remained untouched," she added. "This will lead to a perpetual slow economic growth in the long run."