Asian countries seek to pull millions out of informal economy

JAKARTA -- Governments across Asia are seeking to bring millions of informal workers into regulated employment, and stem a major economic drag on the world's fastest-growing region.

Bangladesh, Indonesia and China have taken steps this month that could help formalize employment for a vast pool of workers that are struggling on the margins of their economies, many as self-employed merchants or agricultural laborers.

The World Bank estimates that informal workers make up 47% of jobs in the East Asia and Pacific region, with the figure rising to between 60% and 80% in lower income countries such as Myanmar and Laos.

The government in Dhaka on Jan. 9 signed a $250 million deal with the institution aimed at supporting efforts "to create large-scale, better-paid and inclusive jobs."

"This will help the government's ongoing initiatives to create labor intensive quality jobs while laying the foundation for a more resilient economy and stronger social protection," according to a statement by Monowar Ahmed of the country's Economic Relations Division.

While the World Bank projects an expansion of 7.1% in South Asia and 6% in East Asia and the Pacific this year -- more than double the global average -- it also sees the region's informal labor markets holding countries back at a time when they are seeking to reduce the impact of the U.S.-China trade war and sinking currencies.

As economies grow and modernize, informal work tends to diminish, with more jobs being created in manufacturing, bureaucracy and services. Making it easier for small businesses to access credit also serves as an incentive to formalize. 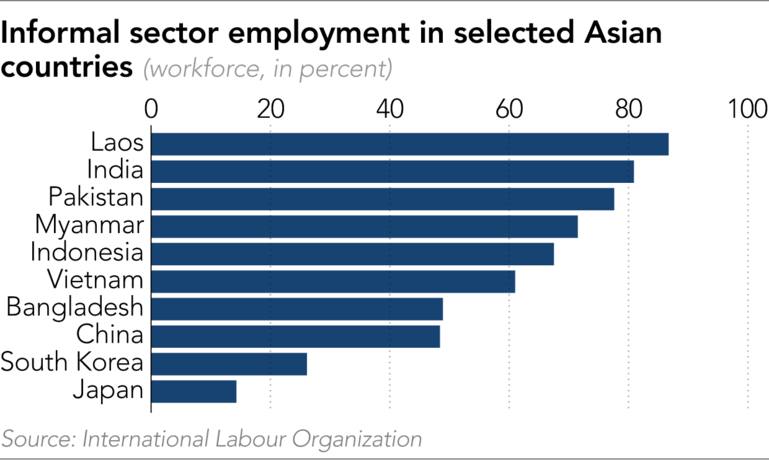 Indonesia's central bank earlier this month reiterated calls for commercial financial institutions to make 20% of their credit available to small and medium-size enterprises.

"The objective is to support them for sustaining and if possible expanding their business," said Siwage Dharma Negara, an Indonesian economy analyst at the ISEAS-Yusok Ishak Institute in Singapore. "Eventually, this will help SMEs to maintain their employees or expand recruitment."

Jayant Menon, an economist at the Asian Development Bank, said that "unregistered or informal SMEs do not need to comply with labor or any other regulations, but they also cannot avail of government support programs or finance, either private or public."

China this month announced steps that Standard & Poor's said could release more than 3 trillion yuan ($439 billion) of liquidity into the banking system. This "could encourage banks to increase lending to struggling sectors they had previously been wary of, such as privately owned or small enterprises," the ratings company said.

Hundreds of millions of Asians have moved from the countryside to cities in the past two decades, helping the reduce the number of people in informal work. But the impact of urbanization depends on local laws. 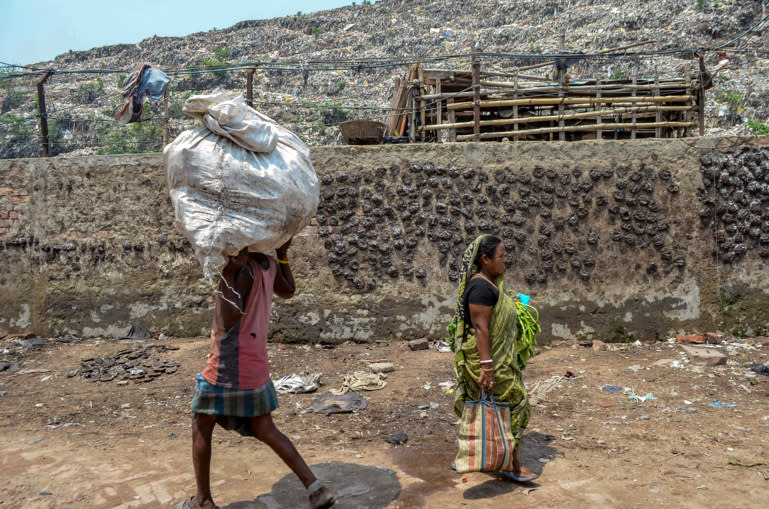 People living alongside this garbage dump outside Kolkata make a living by sifting through the mound for rubber that can be recycled or for items that could be gathered into a sack and shouldered away, to be re-used or sold on. Around 80% of India's employed are estimated to work informally (Photo by Simon Roughneen)

"There is a broad range of policies that include economic and sectoral policies that increase formal jobs," said Sandra Yu of the International Labour Organization, citing steps to facilitate business registration and labor protection.

Menon said that the size and breadth of the informal sector can also be a symptom of distortions such as a highly restrictive regulatory system. "Apart from growth and development, these factors have to be addressed along the way in order to reduce the degree of informality in the economy," he said.

Muhamad Chatib Basri, a former Indonesian finance minister who now teaches economics at the University of Indonesia, said that red tape in the country means that "companies prefer to employ contract or informal workers, who are often unskilled women and children."

"Rigid laws, relatively costly severance systems, and declining return on labor have led investors to avoid labor-intensive sectors, preferring to focus on the natural resource and capital sectors." Chatib said in a recent article published by the ISEAS-Yusof Ishak Institute.

But for millions of businesses, often family-owned or no bigger than a kart-sized kiosk, life goes on in the economic shadows. One such operation is run by Adbul Hidayat, who sells items such as sachets of tea, coffee and shampoo from a stall parked on one of Jakarta's bustling side-streets.

"It is a kind of part time job, sometimes I drive a motorbike taxi, and my wife looks after the stall," said Hidayat