Asian economies expected to pick up slowly in 2020 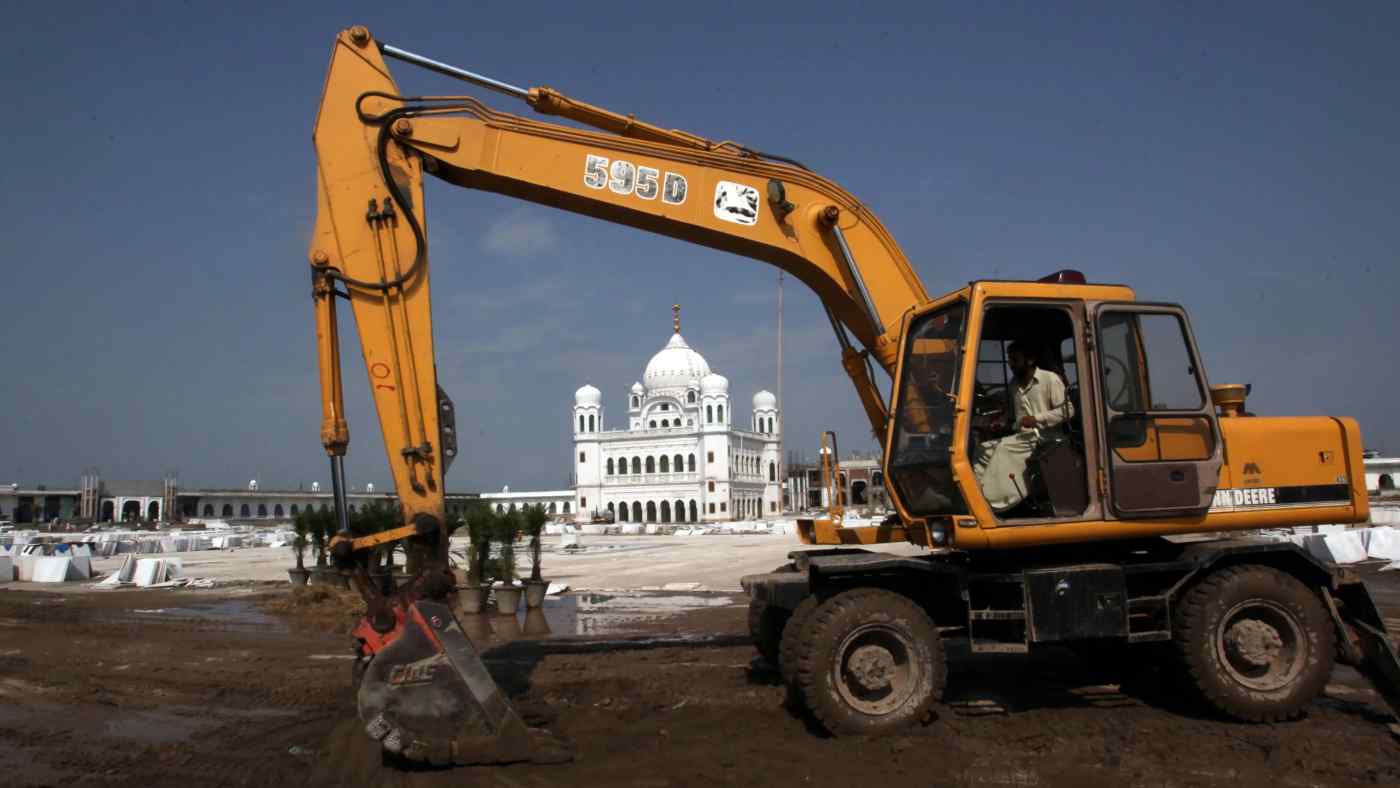 The growth outlooks of Asian economies remain weak for 2020, following a sudden deceleration in 2019 and the continuing U.S.-China trade war. The 2020 growth rate for the five major Association of Southeast Asian Nations countries was projected to inch up to 4.2% from the 2019 projection of 3.9%, but the figure stayed much lower than the levels before 2018. The Indian growth forecast for fiscal 2019/20 was projected at 5.0%, a sharp drop from the 6.8% recorded in the previous fiscal year.

The Japan Center for Economic Research and Nikkei conducted a quarterly consensus survey from Nov. 22 to Dec. 11, collecting 44 answers from economists and analysts in the five biggest ASEAN members -- Indonesia, Malaysia, the Philippines, Singapore and Thailand -- and India.

The 2019 growth outlook for ASEAN5 was revised downward by 0.2 point from the previous survey in September to 3.9%, marking the sixth consecutive downward revision since the September 2018 survey. The figure was 5.0% in the June 2018 survey. 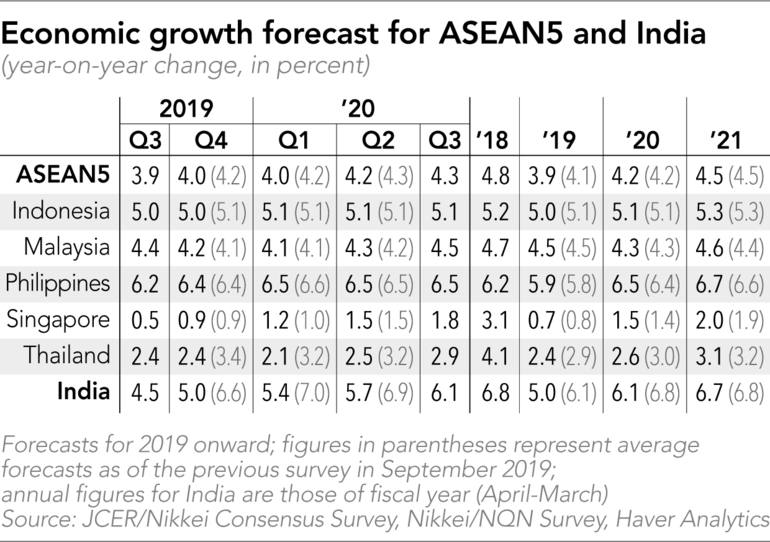 The slowdown is notable in export-oriented Malaysia, Thailand and Singapore. Malaysia's growth rate was projected to decrease from 4.7% in 2018 to 4.5% in 2019, and again to 4.3% in 2020. Wan Suhaimie of Kenanga Investment Bank in Malaysia expected growth "to moderate going into 2020 on the back of rising external headwinds."

Thailand's 2019 projection was revised downward by 0.5 point to 2.4%, a 1.7-point drop from 2018, and the 2020 forecast was revised down by 0.4% to 2.6%. "Thailand's economy is projected to grow at a slow pace in 2020 following global economic slowdown and uncertainty over trade war," said Amonthep Chawla of CIMB Thai Bank. Singapore's 2019 growth rate was projected to fall sharply to 0.7%, down from 3.1% in 2018. Manu Bhaskaran of Centennial Asia in Singapore expected growth to "pick up heading into 2020," but foresaw that "the pace will be gradual."

The Indonesian economy is expected to grow at around 5% in 2019 and 2020, but the 2019 projection was revised slightly downward from the previous survey. Domestic demand remains firm, but "Indonesia's economy is under pressure due to low export growth as commodity prices are relatively low," said Dendi Ramdani of Bank Mandiri.

The 2019 growth rate for the Philippines was projected to fall to under 6% for the first time in eight years, partly due to a delay in implementation of public investment. The growth rate is foreseen to return to 6.5% in 2020. Jonathan Ravelas of BDO Unibank expected a "double dose of stimulus," such as increased infrastructure spending and easy monetary policy, "to drive growth momentum." 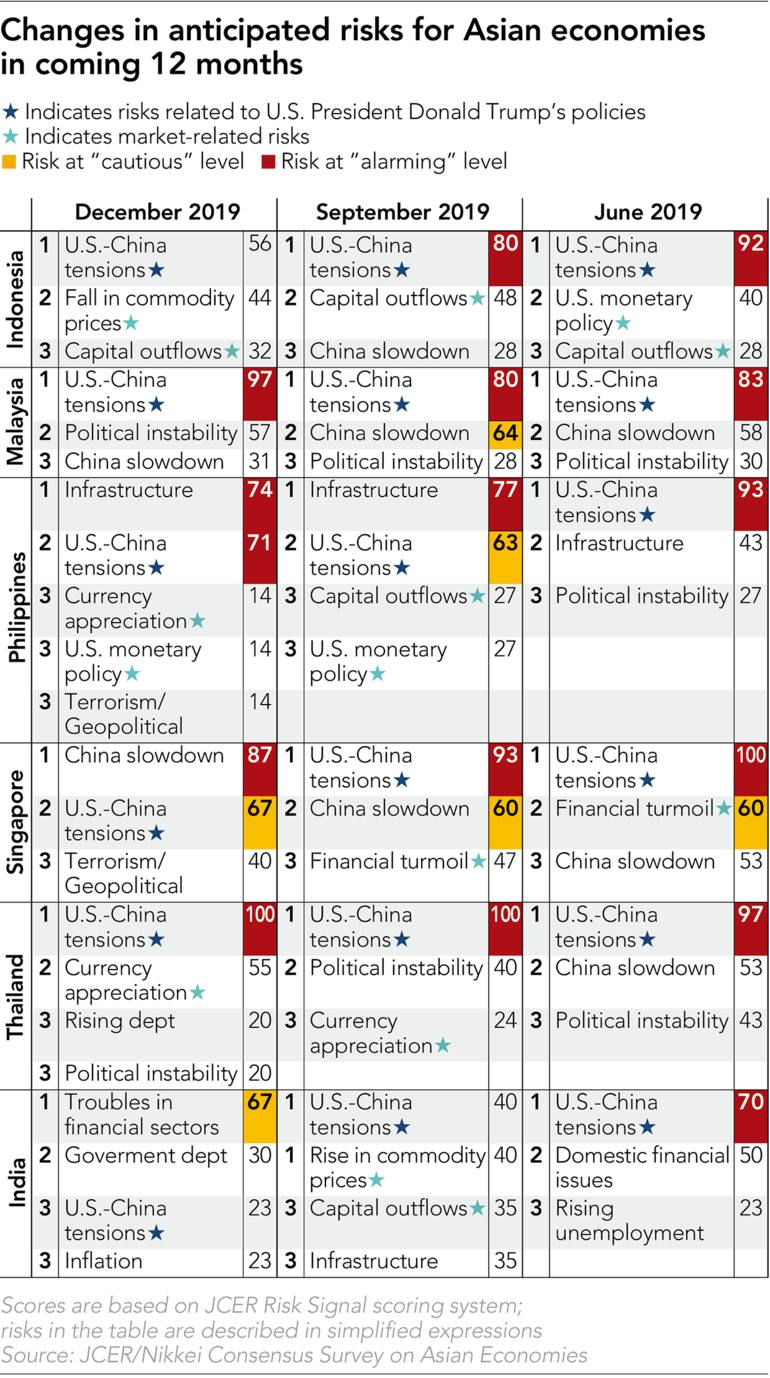 The Indian economy slowed dramatically in 2019. Growth rates marked 5.0% and 4.5% in the April-June and July-September period respectively, due to a slowdown in the global economy and troubles in financial sectors. The forecast for fiscal 2019/20 was lowered by 1.1 points to 5.0%. The projection was 6.9% in the June survey and 6.1% in the September survey. "Weak consumer and business confidence, along with tight financial conditions, is likely to keep India's growth trajectory suppressed over the next two years," remarked Tirthankar Patnaik of the National Stock Exchange of India.

India's growth rate for fiscal 2019/20 is likely to fall below China's figure in 2019, which is estimated to be around 6% in a number of projections made by international organizations and research institutes. Such a reversal would be the first in six years.

The survey asked economists about issues or events that would be important for the world and domestic economies. Many economists noted the global impact of the U.S.-China trade war. "Prospects for a U.S.-China trade deal remain uncertain. President Donald Trump will likely keep squeezing China as part of his bid for reelection next year," commented Donald Hanna of CIMB Bank in Malaysia. 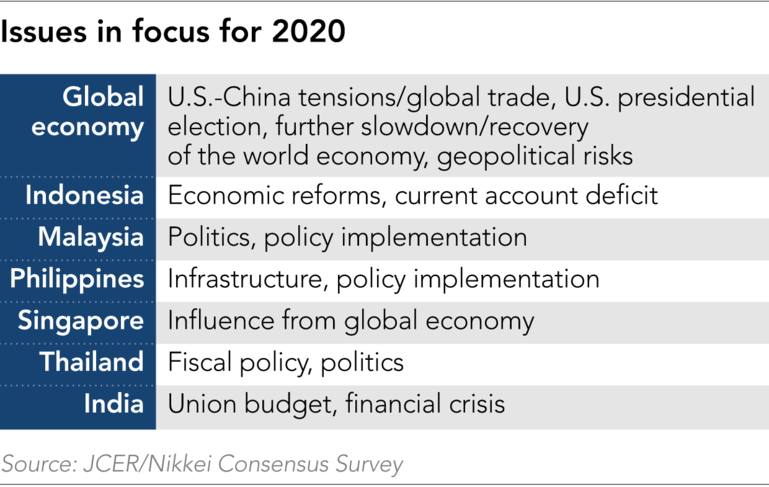 The U.S. presidential election is another big issue. "The general atmosphere of the world economy largely hinges on who becomes U.S. president from here onward," said Carlo Asuncion of the Union Bank of the Philippines. The impeachment of Trump, geopolitical risks and various issues related to developments in the world economy, such as further slowdown and sudden recovery, were also a focus.

As for the risks perceived by economists, "U.S.-China tensions" remained the top risk in Indonesia, Malaysia and Thailand. "Slowdown of Chinese economy" as a result of the trade war was the top risk recognized in Singapore. "Troubles in financial sectors" surged to become the top risk in India.

More details of the survey, including a full list of respondents, can be found on the JCER website.