India and China will continue to drive global growth HONG KONG -- The U.S. is set to take in more goods from Asia this year as tax cuts and deficit spending stimulate domestic demand even as President Donald Trump aggressively raises barriers to Chinese exports as well as to steel and aluminum inflows.

Changyong Rhee, Asia and Pacific director for the International Monetary Fund, said that Asian economies will get a 0.1% to 0.5% gross domestic product lift from the U.S. trends.

Already, Asian factories are getting busier.

"For countries like Cambodia and Vietnam, which have a large exposure to trade and also to U.S. exports, the impact will be largest, at around 0.4% or 0.5%," Rhee said at a briefing in Hong Kong on Wednesday. "The U.S. expansionary fiscal policy will actually increase the U.S. current account deficit."

As some of the U.S. tax cuts are phased out, the medium-term outlook depends on how high Trump's trade barriers, the dollar and interest rates go. Koshy Mathai, the IMF's regional deputy chief, called recent tariff moves "limited" but warned their impact will be felt beyond China, noting that other countries' inputs account for 30% of the value of Chinese exports to the U.S.

"If tariffs are applied to Chinese goods, the impact is going to affect all the suppliers who are selling to China as well," he said. 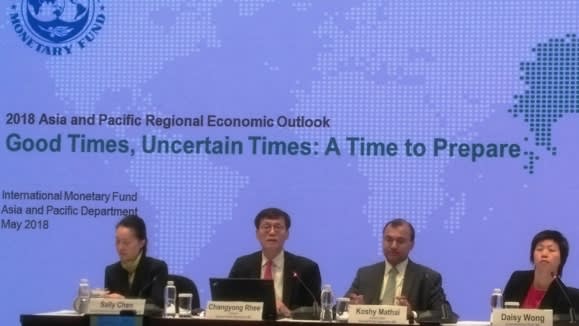 IMF officials speaking in Hong Kong on May 9 downplayed the chance any new support requests will be coming from Asia in the wake of Argentina's plea for help. (Photo by Zach Coleman)

Overall, the IMF expects Asian GDP to rise 5.6% this year and next, 0.1 percentage points more than its forecast in October. Chinese growth is expected to slow to 6.6% this year while India's expansion accelerates to 7.4%. Japan is projected to decelerate to 1.2%, though that is double the rate the IMF last forecast.

Led by China, the region will continue to drive global economic growth this year, Rhee said, adding its contribution will slip slightly from last year's 65% mark due to quickened U.S. and European momentum.

"In general, Asia remains the global engine," he said. "Even within Asia, India and Japan are also recovering, so it's quite broad based."

"We should not be complacent, but general conditions for Asian economies at this moment are much better," Rhee said, while warning that rising debt levels need monitoring. The IMF currently has support programs with Mongolia and Sri Lanka, and there has been speculation that Pakistan and Papua New Guinea might seek help. 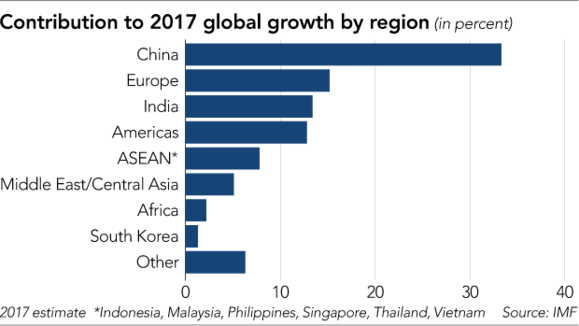 U.S. interest rate normalization moves have rippled through Asian markets in recent weeks, but the IMF officials said there is not much cause for concern or worry about excessive capital outflows.

"In the last few weeks there has been pressure on the exchange rates," Rhee said. "We believe that is a natural adjustment process due to tightening global financial conditions. There is room for interest rates to go up."

Yet the financial outlook could change suddenly. "While Asia's ... increased external buffers since the 2013 taper tantrum should help, the region remains vulnerable to a global risk-off event," the agency said in its regional outlook report, released Wednesday.