TOKYO -- Japanese life insurance and financial services groups are on the hunt for global asset managers, hoping that their higher returns and steady inflows of management fees will help offset the effects of negative interest rates.

Nippon Life Insurance is among them, having won preferential negotiating rights to acquire 20-30% of U.S. asset manager TCW Group late last month. The investment, expected to be in the range of 50 billion yen to 100 billion yen ($442.5 million to $885 million), is expected to be finalized by the end of the year. 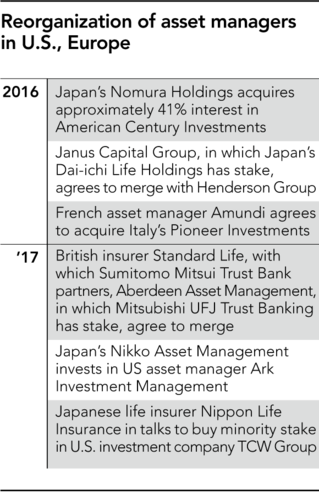 Nippon Life's midterm management plan, through fiscal 2020, calls for increasing group net profit by 60% to 70 billion yen, compared with the year ended March. But after years of low interest rates -- not to mention the Bank of Japan's negative rate policy -- Japanese insurers such as Nippon Life are having a hard time finding suitable investments to reach their targets.

Like other insurers around the world that have struggled to produce healthy yields in an era of ultra-low interest rates, Nippon Life is seeking new sources of growth. Asset managers are appealing targets because they generate steady fee revenue with relatively little capital expenditure. TCW, which is 60% owned by Carlyle Group, manages equity, fixed income and other mutual funds, but also runs hedge funds and other "alternative" products that carry higher risks. TCW had $196.9bn in assets under management as of June.

Meiji Yasuda Life Insurance and Fukoku Mutual Life Insurance have also partnered with U.S. asset managers to handle some funds. The goal is to tap the partners' expertise in managing foreign bonds to generate stable returns. Nikko Asset Management to invest in US fintech researcher

In August, Nikko Asset Management decided to buy into U.S. asset manager Ark Investment Management, which specializes in disruptive innovations like fintech. Nikko was already selling Ark's investment products in Asia and Oceania but saw an opportunity to raise its fintech profile through a capital tie-up.

These deals are part of a broader realignment in the global asset management industry, which has soaked up surplus cash in the age of monetary easing.

Acquiring asset management companies, though, can be a delicate business. Their allure lies in their portfolio managers and other talent; buyers do not want to scare these people away.

As one executive of a major life insurer put it, "We have to acquire asset management companies carefully, so that precious talent doesn't flee to competitors."