Following the global decline in commodities prices, the Australian economy is floundering, seemingly stuck on a slowing growth path. Neither the government nor the Reserve Bank of Australia seems to know what to do. Powerful impediments stand in the way of encouraging higher productivity, the only path to sustainable long-term growth in gross domestic product. 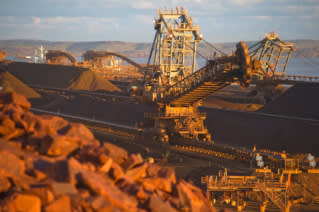 Despite a flood of funds into the nation's financial sector, there is stiff resistance to efforts to ensure that the system does a better job of mobilizing capital for productive new investment. Government cuts to spending on science, universities and schools undermine support for innovation. Political caution frustrates attempts to replace inefficient taxes with others that do less economic harm. The budget deficit seems intractable.

The stalemate is acutely embarrassing for politicians and policymakers, accustomed to boasting that Australia will remain one of the best-performing economies in the advanced world, as it mostly was for about two decades beginning with 1993 and during the global financial crisis.

But Tony Abbott, the usually abrasive Liberal prime minister, merely promises that the budget for the fiscal year beginning July 1, due to be announced by his conservative coalition government on May 12, will be "dull," by which he means it will not upset voters. For its part, the central bank seems powerless to lift stubbornly low growth and warns that rate cuts cannot do the job on their own.

The reason for Abbott's uncharacteristic passivity? Political survival is driving fiscal policy as it has become clear that many voters regard spending cuts announced in the budget for this fiscal year as unfair. Abbott's coalition is suffering from the public's anger, expressed through opinion polls. Although the coalition promised in the 2013 general election campaign that it would deliver a budget surplus in 2014, Abbott is now willing to live with deficits stretching well past 2020. He even said recently that a future "ratio of debt to GDP at about 50% or 60% is a pretty good result." The ratio is currently about 40%.

Chris Richardson, head of the economics advisory firm Deloitte Access Economics, projects an underlying cash deficit of 45.3 billion Australian dollars ($36.1 billion) in the fiscal year starting in 2015; that is A$11 billion worse than what the government projected six months ago. Richardson explains the deterioration as a combination of lower tax revenue on profits from mining exports and subdued wages, plus the rising cost of gridlock in the Senate, the upper house of parliament, where the government lacks a majority.

The likely deficit of about 3% of GDP is about half the current level in Japan and close to the level in the U.S. Yet senior coalition ministers had expected Australia would rank with the best -- Germany is running a surplus of about 0.5% of GDP. They genuinely believed that they would quickly prove to be superior economic managers when they promised to deliver no deficits, no debt and lower taxes. They find it particularly galling that Prime Minister John Key's moderate conservative government in New Zealand is presiding over strong GDP growth of more than 3% and anticipates a budget surplus in the fiscal year starting in 2015. Many commentators in Australia see predictions that the Kiwi dollar will soon reach parity with the Australian currency as highlighting New Zealand's superior performance, although the central bank in Wellington favors a lower exchange rate to encourage exports.

Despite nine cuts in policy interest rates by the Reserve Bank of Australia since 2011, culminating in a record low of 2%, economic growth has averaged about 2.5% over the past five years -- lower still in the past 12 months. This compares with an average of 3.5% since 1960. Real net national disposable income growth has been even weaker in the past three years.

As a result, the central bank has pushed out the time when it expects subtrend growth to pick up. But growth needs to rise above 3% to reverse the increase in the jobless rate from around 4.5% before the global financial crisis to more than 6% today.

New sources of investment growth are needed now that a mining investment boom driven by steep rises in commodity prices, mainly led by Chinese demand, has ended. The boom lifted the volume of Australian mineral exports, but big price falls, particularly for iron ore and coal, have hurt tax revenues. Some analysts believe Australian businesses will benefit from growing demand for food and services in Asia. Others note that these sectors do not enjoy the competitive advantages conferred by Australia's best mineral deposits, which are unusually high grade.

Many commentators yearn for the reforming spirit of the 1980s and early 1990s, when Labor prime ministers Bob Hawke and Paul Keating cut tariff protection, floated the currency, broadened the tax base and deregulated the financial sector. Although the reforms are still lauded for supposedly shifting Australia onto a permanently higher growth path, this has not occurred. 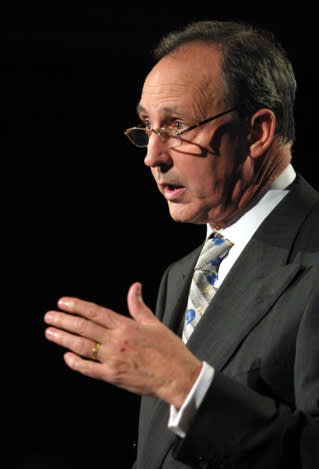 One reason is that in the early 1990s Keating also introduced a system of compulsory contributions to pension funds, which Australians call superannuation, that runs counter to the underlying rationale of the earlier reforms. The subsequent changes increased industry protection, narrowed the tax base and harmed economic efficiency. To critics, the damaging effects on growth are escalating.

Like tariffs, the compulsory contribution of 9.5% of salaries distorts the flow of resources away from more productive uses generated by market forces. The system also has a direct impact on the government budget, through generous tax concessions on contributions and earnings before and after retirement. Due to compulsion, Australia now has the world's fourth biggest funds management industry, but only the 12th largest economy.

The growth in superannuation fund assets has been spectacular -- up from A$650 billion a decade ago to A$1.9 trillion today. The Australian Treasury estimates that this will grow to A$6 trillion by 2037. But the major beneficiaries include the wealth management arms of banks.

International financial group UBS in March issued research showing that Australia's banks comprise 32% of the Australian Securities Exchange's top 300 companies. This is the largest proportion ever recorded in a stock market in the developed world.

Although it may seem counterintuitive, forcing ever-bigger amounts of money into superannuation can harm growth by stifling the flow of capital into productive new investment. John Livanas, chief executive of SAS Trustee, which manages A$40 billion in superannuation funds for the state of New South Wales, complained recently that the industry's primary focus on "buying secondhand shares" does little to help growth.

Industry Super Australia, which speaks for part of the superannuation funds sector, also emphasized this concern in a 2013 report. The report says the overall financial sector (not just superannuation) "has become half as efficient as it was 20 years ago at transforming savings into investment in the real economy."

Moreover, a recent central bank study shows that superannuation funds made no tangible contribution to funding the vast new investment in Australia's mining boom between 2003 and 2012. Yet most superannuation industry leaders -- riding on a growing inflow of compulsory contributions -- fiercely resist any serious changes to the way they operate. 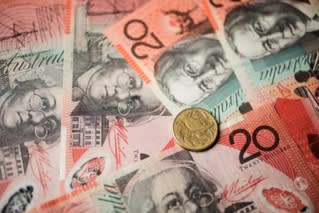 Despite the global financial crisis, the industry superannuation report noted that finance was the fastest growing sector in Australia over the past 20 years, reaching 10% of GDP. Yet in 2012, a Bank of International Settlements paper reassessed the sector's impact on growth and found "unambiguous" evidence that a big financial sector has an adverse impact on productivity. Earlier, BIS research concluded that economic growth can suffer when the financial sector accounts for more than 6.5% of GDP.

The Treasury's conservative calculations show that scrapping the tax concessions on superannuation -- which predominantly benefit high-income earners -- would lift government revenue by A$40 billion in the fiscal year starting in 2017. That is roughly enough to eliminate the budget deficit. The budget impost of the concessions is in addition to the A$50 billion cost of the traditional old-age pension.

Given that the average household savings ratio was higher before compulsory contributions began, superannuation probably does nothing more to increase the number of people whose savings are above the means-tested threshold for age pension payments.

Reducing budget support for well-off retirees would have almost no adverse economic impact compared to cuts to education, scientific research and other areas that promote growth. In comments to a public forum in April, Treasury head John Fraser called for a radical rethink of budgetary support for the wealthy.

Fraser, a former international head of UBS Global Asset Management, said, "It's difficult not to speak about so-called middle-class welfare and the questions around retirement incomes, and the array of concessions and incentives around the age pension, superannuation and housing."

However, Abbott refuses to touch superannuation concessions that allow some retirees to pay no tax on annual incomes of millions of dollars while hard-working employees on A$180,000 a year pay 45%. 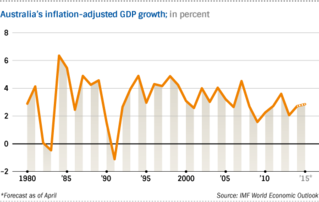 The budget will tighten the means test for the age pension. Labor rejects this but is willing to trim the concessions for superannuation. Neither side will increase Australia's consumption tax (called the goods and services tax) to help reduce the government's reliance on less efficient taxes and fund productive spending.

The underlying budget problem stems from the eagerness of previous Labor and coalition governments to spend temporary revenue windfalls on permanent new payments and tax cuts. The Treasury also erred by assuming that the China boom would be "stronger for longer."

Said Richardson of Deloitte Access Economics, "We still see deficits as far as the eye can see, with the repair task getting harder both because of economics [commodity prices and wages] and because of politics."

Achieving a budget surplus would be much easier if growth were restored from 2.5% a year to its long-term trend of 3.5%. But starting down this path requires both political sides to stop wasting funds on middle and upper welfare and focus spending and tax changes on measures that boost the economy's productive base. At present, a very slow start is all that is on offer from Australia's complacent politicians. , a Sydney-based commentator on defense, economic and political issues, was editor of the former National Times. He is co-author of "Oyster: The Story of the Australian Secret Intelligence Service."