Although annual output still declined 1.1% for 2020, the performance in the second half was a ringing endorsement of the country's rapid policy response to COVID-19 and showed the economy's resilience in the face of intense trade pressure from China.

Australia's extensive tourism industry was possibly the hardest hit by the pandemic, with borders closed to overseas visitors and residents kept at home in lockdowns, largely shutting down the leisure sector and airlines. On top of these challenges, an escalating diplomatic feud with China saw Beijing bar some, if not all, Australian coal, barley, cotton, meat, wine and lobsters.

Some Australian businesses have suffered significant losses. But Sarah Hunter, chief economist at consultancy BIS Oxford Economics, told Nikkei Asia that the impact of China's measures "has not been as pronounced and as negative as might have been expected."

"What we're seeing through the data and hearing from people on the ground is that for many of the commodities that would normally sell into China, if they're not able to sell into China, they're actually able to look at and move into other markets," Hunter said. "So you are getting trade dispersion effects rather than a complete collapse in those flows."

Hunter added that China has a "fairly limited" ability to find other sources for key commodities that Australia supplies as the dominant global player. "Iron ore is the best example of that," she said, since Australia produces 60% of seaborne iron ore exports.

She was careful not to minimize the difficulty for businesses that must seek out other markets, acknowledging the costs and potential dents to revenue. "But in terms of how that plays through and how we see it coming through as a drag on GDP growth, it looks like that's a smaller drag than it might be at first glance." 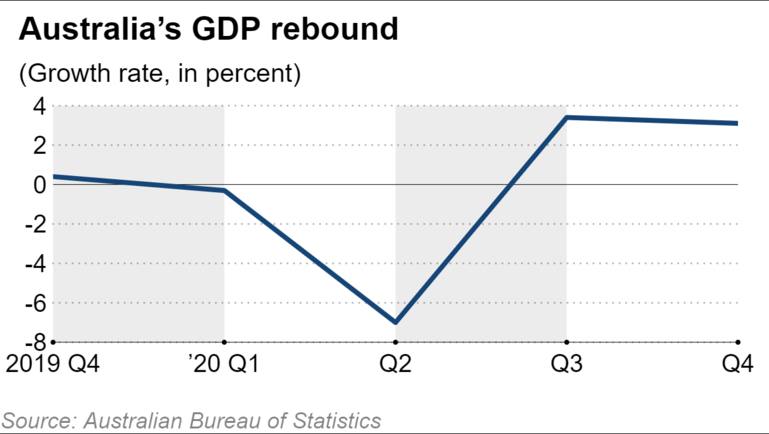 Data from the Reserve Bank of Australia appears to support Hunter's conclusion, with its index of commodity prices showing strong growth. "Using spot prices for the bulk commodities, the index increased by 6.3% in January," in terms of the International Monetary Fund's special drawing rights currency basket, the central bank said. That put the index up 24.2% over the past year.

The Australian Broadcasting Corp. reported that growers were indeed finding markets other than China for their crops, with strong demand for animal-feed barley from buyers in the Middle East and a 35,000 ton trial of premium malting barley for brewers in Mexico, for example. Indo-Pacific neighbors, such as Indonesia and Bangladesh, are buying Australian cotton that Chinese spinning mills have been told to avoid.

All this came as Australia scrambled to cope with the effects of COVID-19. But the federal government flooded the economy with income support for employees who lost work due to the pandemic and wage subsidies for companies. The RBA, for its part, cut interest rates to 0.1% and bought up billions in government bonds in a "quantitative easing" campaign to increase the money supply.

Hunter said the GDP data highlighted the effective measures taken by both the government and the RBA.

Financial markets warmly welcomed the strong data, with the S&P/ASX 200 share index rising 55.70 points, or 0.82%, on Wednesday and the Australian dollar hitting a robust 78 U.S. cents. For Prime Minister Scott Morrison, the healthy numbers were a welcome distraction from simmering scandals over alleged sexual harassment and abuse in the upper echelons of Australian politics.

Attorney-General Christian Porter the same day held a media conference to deny a rape allegation against him by a woman who died by suicide last year. She alleged Porter raped her when they were students at a debating competition in 1988.

Porter and Defense Minister Linda Reynolds -- Higgins' boss, in whose office the alleged rape occurred -- have taken leave from their jobs for health reasons.

The government is also taking heat over a discomfiting inquiry into Australia's aged care sector. It found the drastically underfunded and largely privately run system had failed to provide proper care to a great number of seniors, with 148 recommended improvements.

The criticism could complicate Morrison's planning for the next federal election. There had been speculation that the prime minister would call an early vote later this year, capitalizing on his government's largely successful handling of the coronavirus. But local media late last month reported Morrison telling party colleagues to prepare for two budgets before the next polls, which would push the race into 2022.