Ayala Corp. owns half of Generika, a 90% franchised pharmacy chain, and wants to lift the proportion of company-owned outlets to 33% by 2020.
CLIFF VENZON, Nikkei staff writerFebruary 23, 2017 10:00 JST | Thailand
CopyCopied

MANILA Before Ayala Corp. became an investment powerhouse, the 183-year-old group ran a drugstore as one of its first businesses. Now, as it accelerates its diversification efforts, the oldest Philippine conglomerate is going back to those origins by offering comprehensive health care services to Filipinos.

In 1834, pharmacist Johann Andreas Zobel, an ancestor of the Zobel family that controls Ayala, established a drugstore called La Drogueria y Botica de Zobel in Manila's historic Walled City. The business was passed down to Zobel's son and then his grandson, Jacobo, who studied pharmacy and medicine in Madrid. The drugstore was sold in 1903 and closed during World War II. 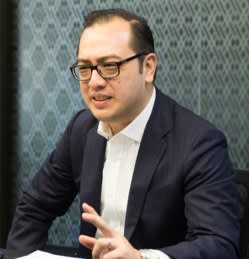 Fast-forward to the present: On Feb. 9, Ayala Healthcare Holdings, or AC Health, said it was taking a minority stake in Wellbridge Health, a startup that owns online pharmacy MedGrocer.

"We feel that the [health care sector] is ripe for disruption, and there is more to do to really uplift the quality of health care in the Philippines," AC Health chief executive Paolo Borromeo told the Nikkei Asian Review on Feb. 13.

The investment in MedGrocer is the latest in a string of health care-related deals the Ayala group has struck in recent years. AC Health was established in 2015 as a wholly owned subsidiary charged with spearheading health-related expansion. That year, it bought half of Generika, a retailer of inexpensive medicines, and launched FamilyDoc, a chain of clinics offering primary care services.

MedGrocer could help to boost sales at Generika while addressing the doubts many Filipinos have about the efficacy of unbranded drugs. In addition, since 2013 Ayala has had a joint venture with the Mercado Group in operating QualiMed, which runs three hospitals and six clinics.

All of this reflects a directive from Ayala Chairman and CEO Jaime Augusto Zobel de Ayala. He tasked Borromeo's investment team with identifying new sectors to target. Zobel said three conditions had to be satisfied: There must be a space for a new player, growth potential and room for disruption. "We pitched health care," said Borromeo, who is also Ayala's head of corporate strategy.

UNDER THE MICROSCOPE Ayala's shares rose 1.2% on the day the MedGrocer deal was announced, outperforming the benchmark Philippine Stock Exchange index, which gained 0.24%. 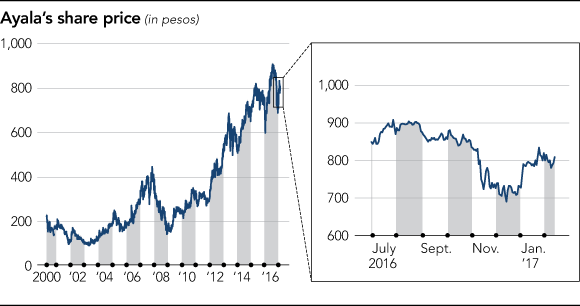 The conglomerate, however, is still reeling from a market sell-off last year. This was triggered by the U.S. Federal Reserve's plan to gradually increase interest rates, as well as foreign investor wariness of new Philippine President Rodrigo Duterte.

On Feb. 17, Ayala shares closed at 781 pesos, down 0.89% from the previous day. Since Duterte took office on June 30, 2016, the stock has dropped 8% while Manila's benchmark index has declined 7.1%. In contrast, diversified conglomerate San Miguel, which has expanded from food to infrastructure, has surged by 36.6% during the same period. 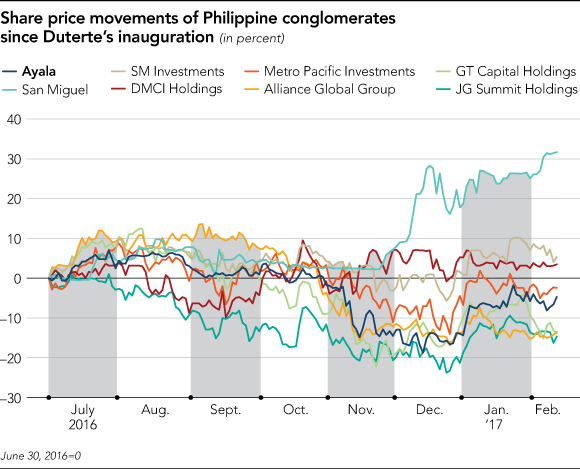 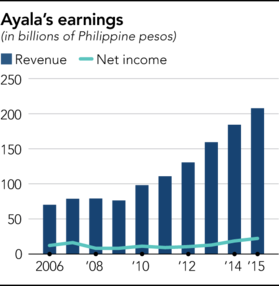 The diversification drive has led to investments in transportation, power infrastructure, education and motorcycle production. Self-driving cars are on the radar, too.

Health care, though, is seen as a bright spot given the unmet demand. In many provinces and some districts of the capital, residents struggle to find even basic health services, due to a shortage of staff and supplies in government clinics.

Duterte, who bills himself as a socialist, has promised to prioritize public health. In August, he sent Health Secretary Paulyn Ubial to Cuba to study its public health care system, which many regard as a model of efficiency. 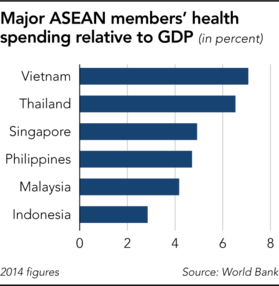 The Philippine government in recent years has also sought to increase its health care budget relative to the size of the economy. Yet the country, with its growing population, still lags behind regional peers. Health expenditure in the Philippines stood at 4.71% of gross domestic product in 2014, according to the World Bank. The share in Vietnam was 7.07%, while in Thailand it came to 6.53%.

Data from Euromonitor International, a consumer research company, shows that Filipinos are spending more on health care as household incomes increase. Consumer spending on health goods and medical services grew by 52.19%, to 2,779 pesos per capita, from 2011 to 2016. The figure is expected to rise 36.57%, to 3,795.4 pesos, by 2021, according to Euromonitor. Numbers like these convinced Ayala to seek opportunities in private health care.

Through its existing operations, a patient can consult a FamilyDoc physician and get laboratory tests or buy generic medicines in the same clinic. If necessary, the physician may refer the patient to a QualiMed hospital.

"The hospital landscape is fragmented, not integrated," Borromeo said. "It is still a broken system in the Philippines relative to Thailand and Singapore."

By innovating, he added, "there is so much value you can create."

Ayala is hardly alone in looking to cash in on demand for health care as the middle class expands. Metro Pacific Investments has taken over 13 tertiary hospitals, which offer specialist treatment, in the last decade, amassing a combined bed count of nearly 3,000. The company is thinking about taking its hospital unit public to accelerate expansion.

The Villar property group is building the first of what it hopes will be a chain of medical centers near its residential holdings. 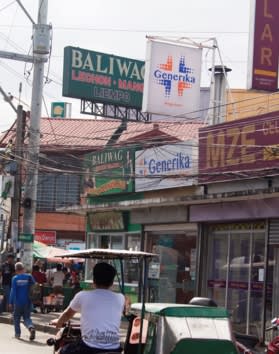 While Metro Pacific and the Villar group are targeting relatively affluent Filipinos, though, Ayala's approach is geared toward a broader clientele. "We are trying to emphasize that Ayala is now touching people at different price points, much more than ever before," a local newspaper quoted Zobel as saying in November.

BIG PLANS AC Health has earmarked between $100 million to $200 million to widen the Generika and FamilyDoc networks. Generika has over 670 stores nationwide, while FamilyDoc has six clinics on the southern outskirts of Manila. By 2020, AC Health plans to expand Generika to 1,000 stores and FamilyDoc to 100 clinics. Ayala Land is making separate investments in QualiMed facilities, with plans to add one or two locations annually.

Ayala wants to occupy the whole spectrum of health care, from consultation to medical financing. "If we see other opportunities requiring more capital, we would study them very carefully and determine if we should invest," Borromeo said, noting the company is looking into building specialty clinics, including for cancer. Drug production is a longer-term possibility. Luis Limlingan, managing director at Manila-based brokerage Regina Capital Development, said Ayala's health care investment is promising. "It's one of the industries that need to be developed," he said.

Ayala may find it difficult to get into drug manufacturing, due to the dominance of local players such as United Laboratories and Pascual Laboratories. "The fact that these players have not gone public -- that means they have enough capital," Limlingan said.

But Ralph Bodollo, an analyst at local brokerage RCBC Securities, said Ayala has a history of successful partnerships. "Its track record can make a difference," he said. "Generika was a closely held investment before they came in."

Ayala expects its new businesses, including health care, will account for 20% of its projected profits of 50 billion pesos by 2020 -- more than double its 2015 earnings. The new and unlisted ventures currently contribute around 10% to profits.

Bodollo said he does not expect health care to be a meaningful contributor to Ayala's earnings for at least five years. Borromeo could not provide financial information for AC Health, but noted that Generika's sales grew 15% last year, while FamilyDoc clinics opened last year now have around 16,000 patients combined, mostly coming from the first two branches.

Foreign competitors are likely to notice the same factors that attracted Ayala to the Philippine health sector. Last year, Sanitas Internacional, a Spanish company that has health center and insurance operations, started developing several projects in the Philippines.

Nevertheless, Ayala's health business has come a long way from its Walled City roots, and the group's strategy could carry it a great deal further.