TOKYO -- Sentiment among Japan's large manufacturers slumped in the three months to March as uncertainty continues to hang over the global economy, the Bank of Japan's latest Tankan survey showed on Monday.

The closely watched index of sentiment among large manufacturers came to plus 12 in the January-March period, compared with plus 19 in the previous quarterly survey. Economists had expected a reading of 14, according to a poll conducted by Nikkei group company QUICK.

The decline marks the biggest fall since the December 2012 survey, and has brought the headline figure to the lowest level in two years. The index measures the percentage of companies that say business conditions are favorable, minus those that say the opposite. It is considered an indicator of Japan's economic health and of any potential monetary policy shifts ahead.

"The marked fall in the Tankan in the first quarter confirms that the economy has slowed sharply at the start of the year," said Marcel Thieliant, senior Japan economist at Capital Economics, a London-based research house. Thieliant believes economic growth came to a halt in the first quarter of 2019.

Big manufacturers expect the diffusion index to fall to plus 8 in the next three months, the survey showed.

The downshift, however, is not expected to lead to an immediate policy change at the BOJ. "The BOJ is likely to argue that the domestic economy is still holding up despite a weakness in exports," said Yoshiki Shinke, chief economist at Dai-ichi Life Research Institute. "This argument may become more difficult to maintain if economic indicators continue to deteriorate, but the latest Tankan figure won't be enough to force a policy change."

The index has been on a downward trend since peaking at 25 in the December 2017 survey, in tandem with slowdown in the Chinese economy -- the world's second largest -- and the escalating Sino-U.S. trade dispute. 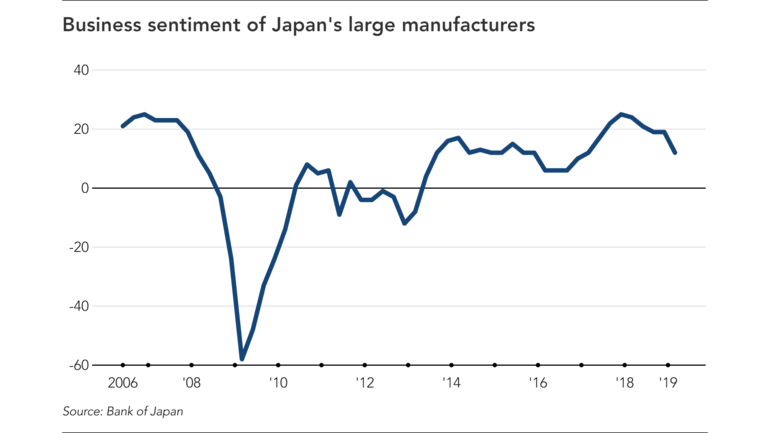 China is Japan's second largest export market after the U.S., but exports there have been weakening since late last year.

The diffusion index for large nonmanufacturers, meanwhile, came to 21, versus the 22 expected by the market.

Japan's monetary policy is already extremely loose and the central bank has been signaling that it is in no rush for further policy easing, citing the robustness of the U.S. economy and the stimulus measures introduced recently by China.