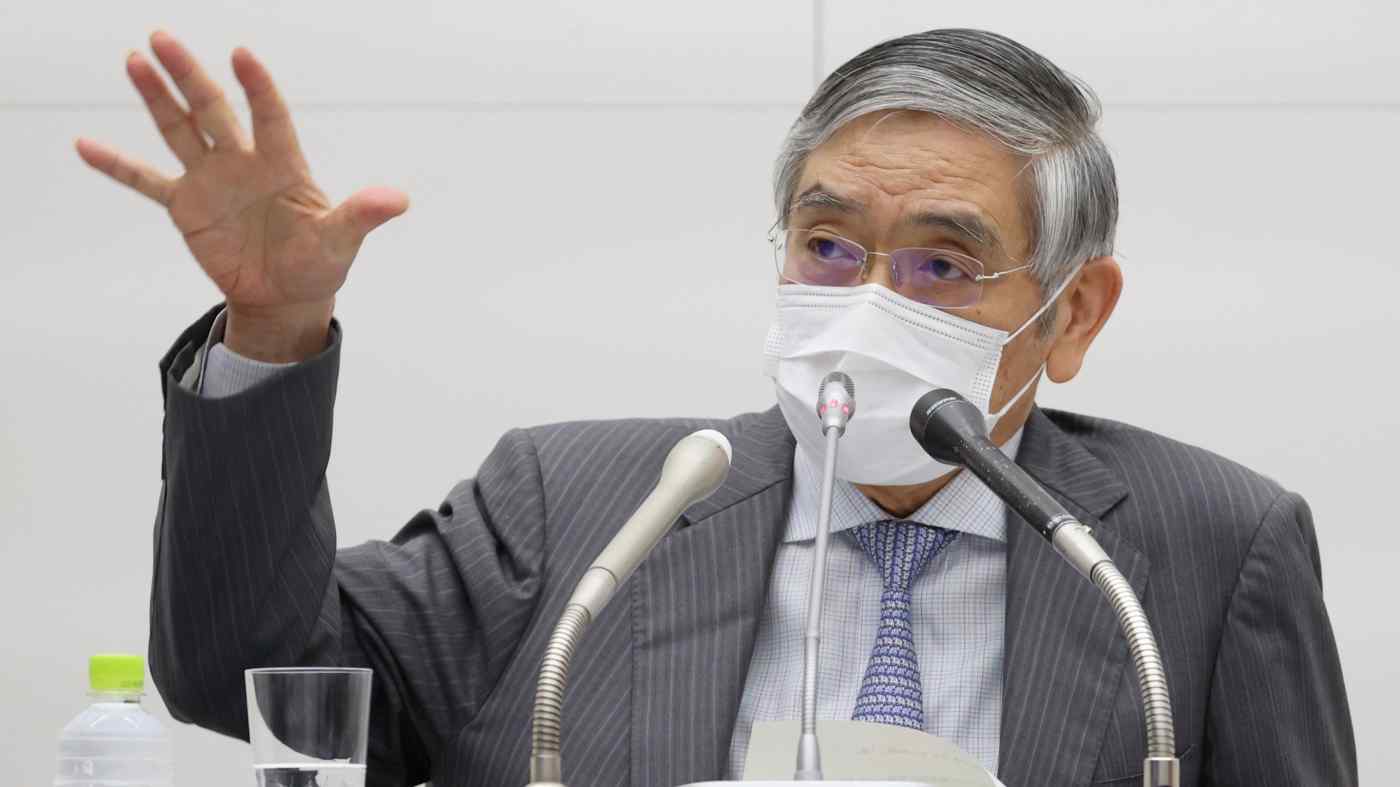 TOKYO -- The Bank of Japan is prepared for an extended campaign to support businesses that have been hit by the coronavirus pandemic, Gov. Haruhiko Kuroda said on Tuesday, warning that economic activity could take time to fully recover.

"We are prepared for an extended campaign to help prevent businesses from running out of cash and to keep the financial markets stable," Kuroda said in a news conference. "Issuance of corporate bonds and commercial paper remains at an elevated level. It is important to keep the borrowing costs low."

BOJ's plans are akin to efforts by other central banks to provide funds directly to companies to help keep them afloat. The U.S. Federal Reserve said Monday that it would begin buying individual corporate bonds.

Last week, Fed officials predicted that interest rates would remain close to zero until at least the end of 2022. On Tuesday, Kuroda matched that dovish tone, saying he did not expect BOJ to raise rates before the Fed does. "To be honest... I don't think we will be anywhere near raising interest rates in 2021 or 2022," he said.

Such accommodative policy stances are part of the reason why global investors have turned bullish recently. Tokyo stocks rallied nearly 5% on Tuesday, even as the real economy continues to struggle to overcome the impact of the pandemic.

"Market participants appear to be pricing in earnings recovery that is expected to come with the reopening of the economy," Kuroda said. However, he said financial markets remain volatile, reflecting a high level of uncertainty over economic outlook. He stressed that BOJ would continue to support the market through equity purchases.

It had been hoped that the economic activity would normalize once the pandemic was brought under control, erasing the problem of funding shortages. The reality so far, Kuroda warned, showed that consumer spending did not recover quickly in most countries, including China.

Restaurants and tourism sites are still suffering, Kuroda said. He expects those businesses to continue to face funding and cash flow challenges.

The BOJ is now offering funds without interest for up to one year to commercial banks that are lending to businesses and families that are suffering the impact of the pandemic. They can even receive 0.1% interest from the BOJ on the loans they make.

The central bank is hoping that its moves will not only help to save businesses, but jobs as well. The seven-week state of emergency over April and May had forced businesses to close while consumers were urged to stay home, resulting in revenue losses and cash shortages for restaurants, cinemas and other entertainment outlets. Hotels and tourism sites were also devastated by travel bans.

The emergency declaration was fully lifted on May 25, but fears over a second wave of infection have kept economic activity such as dining, travel and shopping subdued, fueling concerns about an economic recovery.

Yuichi Kodama, chief economist for Meiji Yasuda Research Institute, said the central bank had signaled its commitment to expanding its monetary stimulus program to ensure businesses survive and that banks continue to lend to companies.

The sense of urgency can be gleaned from BOJ use of particularly strong language in Tuesday's policy statement. "Japan's economy has been in an extremely severe situation due to the impact of the novel coronavirus at home and abroad," the statement read, adding that "overseas economies have been depressed significantly."

But the statement also tried to inject some optimism by saying that the economy is "likely to improve" because of fiscal and monetary stimulus measures and through the realization of pent-up demand in the private sector.

Other steps BOJ has taken include doubling purchases of equities and a pledge to buy Japanese government debt without limit.

The central bank has kept its short-term interest rate target unchanged at minus 0.1% and maintained a goal of steering long-term rates to around zero.

The record pace of spending by the government has resulted in a sharp increase in government debt, prompting the central bank to step in to support the bond market.

Japan's economy shrank at an annualized rate of 2.2% in the January-March quarter, and economists expect a contraction of 21% in April-June, reflecting the impact of the state of emergency in place then.