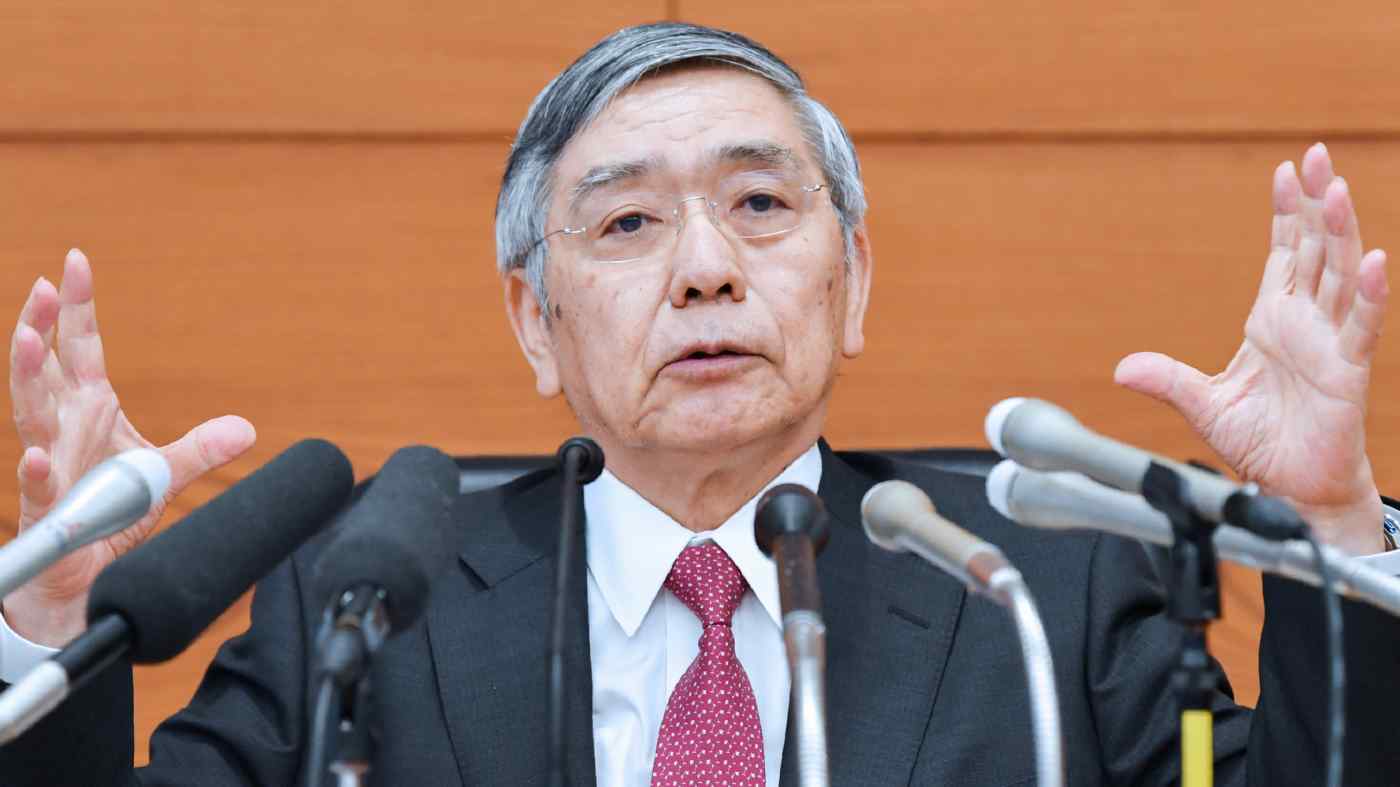 TOKYO -- Bank of Japan Gov. Haruhiko Kuroda on Thursday said he is "more positive" about the idea of additional monetary easing than he was after the central bank's previous policy meeting in July, given rising risks to the global economy.

Nevertheless, he stopped short of committing himself to new measures when the board convenes again on Oct. 30-31.

The BOJ on Thursday kept its ultra-easy monetary policy unchanged, even as central banks in the U.S. and Europe have shifted to renewed easing in response to signs of global economic weakness.

After a two-day board meeting, the Japanese bank decided to keep long-term interest rates around zero, allowing them to fluctuate flexibly depending on market conditions. The short-term deposit rates are kept at minus 0.1% as the bank sticks to its negative interest rate policy.

The BOJ said it will increase its holdings of Japanese government debt by 80 trillion yen ($740 billion) a year and that of corporate equity by 6 trillion yen.

Afterward, Kuroda told reporters that he had nothing to add to the bank's policy statement, which reads: "The bank will reexamine economic and price developments at the next [policy meeting]," when it will release a quarterly economic outlook update.

"External risks to the economy have clearly risen, including protectionism moves and geopolitical tensions, since the last policy meeting [on July 29-30]," Kuroda said. "The situation requires more careful monitoring."

Expectations for October easing are mixed among market players. "All eyes on the upcoming weeks and what comes out of the next meeting on 10/31!" said Takeo Kamai, head of execution services at CLSA Securities Japan.

BNP Paribas chief Japan economist Ryutaro Kono said the statement is no promise of October easing. He said it is entirely possible that the BOJ will issue a similar statement again after the October meeting just to keep hopes of easing high.

The central bank maintained its forward guidance on monetary policy, saying, "The bank intends to maintain the current extremely low levels of short- and long-term interest rates for an extended period of time, at least through around spring 2020."

The BOJ also reiterated its willingness to take action if necessary, saying, "The bank will not hesitate to take additional easing measures" if there is a greater risk to achieving its 2% inflation goal.

The bank maintained its assessment that the economy is "on a moderate expanding trend."

The room for policy easing in Japan is limited, analysts say, and it is feared that further easing could damage Japanese banks' operations by making it harder for them to earn interest.

Kuroda pushed back against the notion that the central bank is running out of options. "The BOJ may look as if it has less room for easing when its policy rate of minus 0.1% is compared with around 2% for the U.S. Federal Reserve," he said. "But the ECB has reduced its deposit rate to minus 0.5%. Compared with the ECB, the BOJ may appear to have more room for additional easing."

The governor reiterated that the bank has four policy tools at its disposal -- reducing the deposit rate below minus 0.1%, guiding the long-term interest rate target below zero, expanding the asset purchase program and increasing the pace of monetary base expansion. He said he has no particular preference among these options and that the choice would be made in view of economic and market conditions, and in consideration of the positive and negative effects of each tool.

Kuroda added that he would like to see a steeper yield curve, noting that low long-term interest rates would make pension investment difficult and increase concern about retirement life in general.

The decision to stand pat came the day after the U.S. central bank cut its interest rates for the second time in less than two months by 0.25 of a point and maintained an easing stance, as the U.S. economy has felt the effects of the prolonged trade war with China and has decelerated.

The ECB on Sept. 12 reduced its deposit rate by 0.1 of a point to minus 0.5% and launched a new round of quantitative easing.

The European bank's move has increased pressure on central banks around the world to follow suit, in order to prevent their currencies from appreciating and thus hurting the competitiveness of their exports.

The BOJ meeting came ahead of a much anticipated increase in the consumption tax rate in Japan to 10% from 8% on Oct. 1. The tax increase is intended to plug a hole in government finances amid growing social security expenditures, but could put pressure on the economy at a time of global stress.

Japan's economic growth slowed to 1.3% in April-June from 2.2% in January-March, but Tokyo stock prices and the dollar-yen rate have been stable recently, allowing the BOJ to wait until economic conditions show clearer signs of deterioration.