BOJ watchers split on Kuroda's next step -- tightening or easing 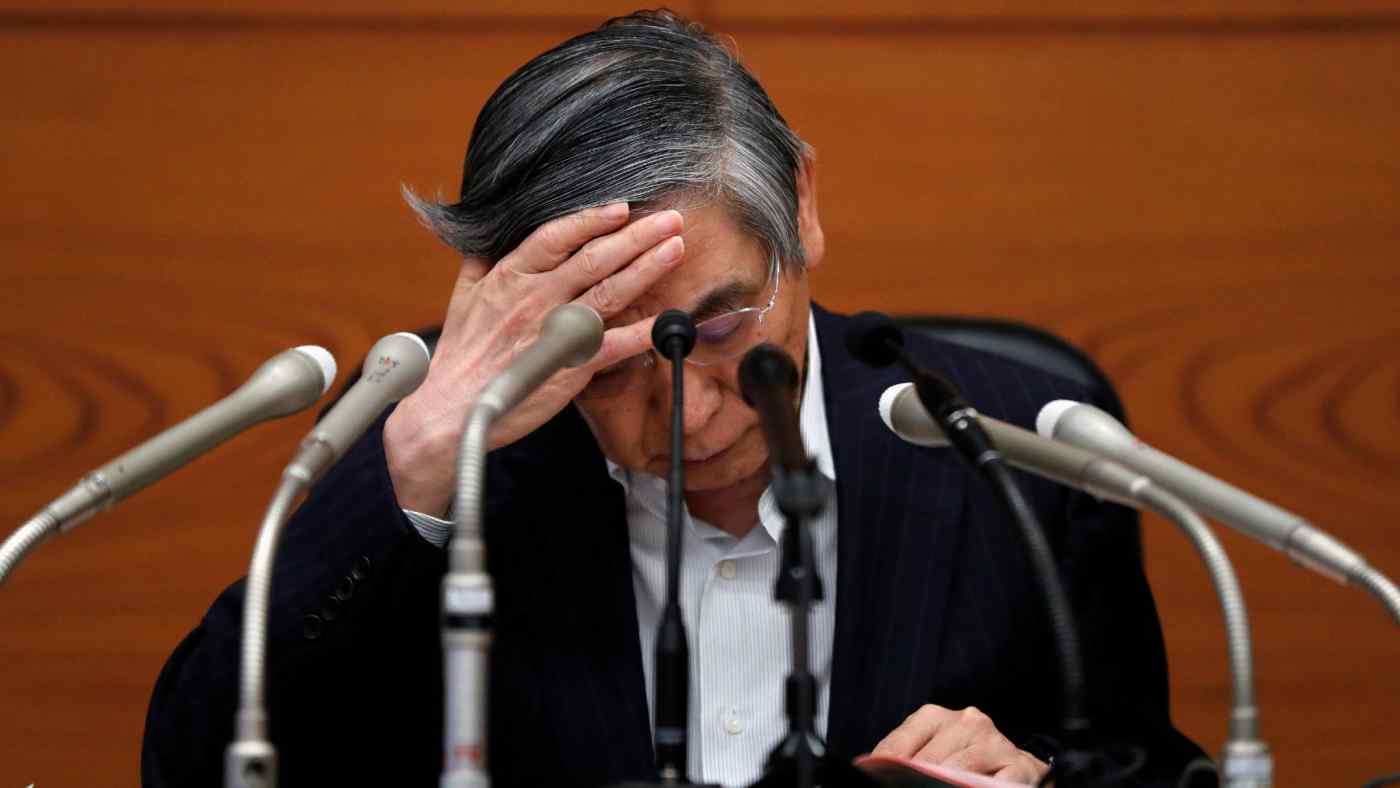 The BOJ may have to implement additional easing if the global economy slows, but it may also tighten policy to stem negative side effects.   © Reuters
KOTARO FUKUOKA, Nikkei staff writerJanuary 29, 2019 05:09 JST | Japan
CopyCopied

TOKYO -- Three years after the adoption of the negative-interest-rate policy, economists are evenly divided on whether the Bank of Japan will undertake further monetary easing or raise interest rates, as the stated goal of 2% inflation remains far out of reach.

Of the 20 economists interviewed by Nikkei, seven predicted that the BOJ will introduce more easing while nine said it will tighten policy by either scrapping the negative-rate policy or guiding long-term rates higher.

Consumer prices excluding those on fresh foods rose just 0.7% in December, still not close to the 2% target, and momentum toward higher inflation seems to be weakening. The BOJ kept its policy unchanged at a meeting last Wednesday, but growing concern about a global economic slowdown has fueled speculation of additional easing.

The easing camp believes the BOJ will be forced to act as upward pressure builds up on the yen. "The BOJ will further lower the negative rate should a global economic downturn greatly strengthen the yen," said Ryutaro Kono of BNP Paribas Securities (Japan).

On the other hand, those predicting tightening are concerned about the side effects of negative short-term rates, which have squeezed earnings at financial institutions. Yuichi Kodama of Meiji Yasuda Life Insurance said negative interest rates will be eliminated in 2020.

The BOJ in 2016 began applying a negative 0.1% interest on the funds commercial banks park at the central bank in excess of legally required reserves to encourage lending as the Chinese economy showed signs of slowing. This pushed long-term rates below zero, however, depriving financial institutions of investment options.

In response, the BOJ introduced a yield curve control mechanism to guide long-term interest rates to around zero -- a policy it still maintains.

A majority of the economists are skeptical about the BOJ's inflation target, with 13 saying it is impossible to reach. Many see the 2% goal as depriving the BOJ of policy freedom, with a half of them saying the target should be viewed with some flexibility.

At the same time, the BOJ might be in a bind. "If the BOJ reassesses the target on its own, it risks strengthening the yen," said Takashi Miwa of Nomura Securities.

BOJ Gov. Haruhiko Kuroda began his second term in April. He has been criticized for bringing Japan's bond market to a near halt with prolonged easing policies amid persistent deflation. To remedy the situation, Kuroda adjusted his policy in July by doubling the trading range for long-term interest rates.

The economists surveyed did not have high praise for Kuroda's second term so far. Only one saw the July adjustment as the best option available to Kuroda, while 15 said it was a good move but insufficient, and two said it was unnecessary.

While 16 of them do support Kuroda's move in July, long-term rates are still stuck below zero after reaching around 0.15% right after the adjustment. Their responses reflect the reality that market function has recovered just marginally.

The economists are similarly split over the importance of the BOJ's decision to adopt forward guidance, which says that ultralow long- and short-term rates will be maintained for the time being. Nine said it was significant while 10 said the step did not do anything.

"It only confirmed the obvious -- that interest rates cannot be raised as the inflation target remains out of reach," said Yasunari Ueno of Mizuho Securities.

The average grade given for Kuroda's policies from 19 economists was a 56 out of 100. Some rated his performance highly, but a quarter of the responses fell in the 30 to 40 range.