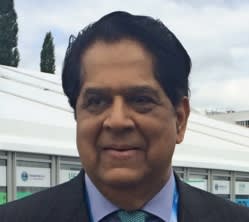 Kamath spoke to reporters here the day of the summit between the leaders of Brazil, Russia, India, China and South Africa.

The five countries plan to contribute equally to the New Development Bank's $50 billion in capital. Unlike the China-led Asian Infrastructure Investment Bank, the BRICS bank will finance projects beyond Asia.

The bank will initially fund projects in the five countries and will start supporting operations in other nations after it starts expanding membership, Kamath said.

He ruled out offering support to Greece, saying the bank currently lacks the jurisdiction. He also said the bank can build cooperative relations with the AIIB and the World Bank instead of competing with them.