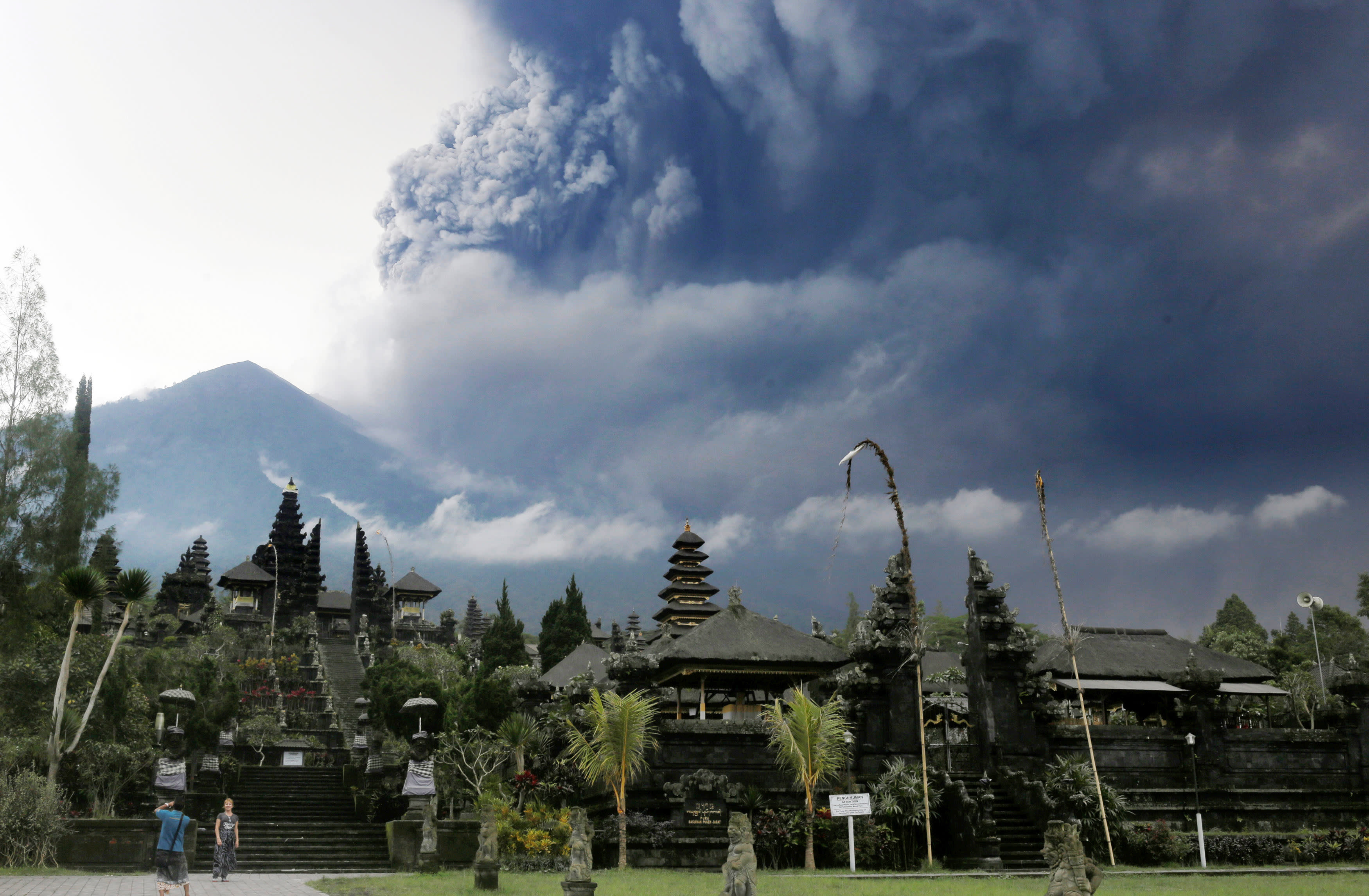 JAKARTA -- Eruptions from Mount Agung on the Indonesian resort island of Bali intensified on Monday, forcing the island's main airport to close and thousands of people to leave the area. They also are threatening Indonesia's goal of increasing foreign tourist numbers by 30% this year and could have consequences on an economy that heavily relies on tourism.

Ngurah Rai Airport will be closed at least until Tuesday morning, authorities said. A total of 445 flights and some 59,000 passengers have been affected. Carriers that have canceled flights include Indonesia's flag carrier Garuda Indonesia, Virgin Australia, Cathay Pacific, AirAsia and Jetstar.

The airport operator said it would monitor the situation and evaluate its temporary shutdown every six hours.

Volcanic activity began picking up in late September, and Mount Agung finally erupted on Nov. 20. But the initial eruptions were weak, with ash reaching an altitude of only 700 meters. Most flights continued to operate normally.

On Monday morning, however, ash was rising as high as 3,400 meters, prompting authorities to raise the alert level to four, its highest point.

"Clouds of ash continue to come out [of the crater], accompanied by explosive eruptions and weak sounds of explosions that can be heard 12km away from the summit," Sutopo Purwo Nugroho, a spokesman with the National Disaster Mitigation Agency, or BNPB, said Monday. 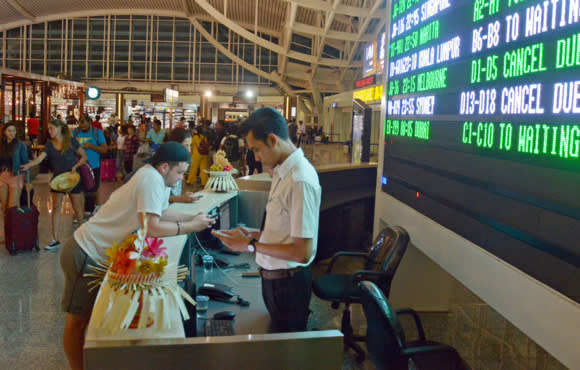 "Lights from fire have been more frequently observed," the agency spokesman added. "This indicates that potentially bigger eruptions will soon occur."

Nugroho said people living in 22 villages within 8km to 10km of the crater have been told to leave. The agency estimates there are 90,000 to 100,000 people in the area, but so far less than half have sought refuge in shelters outside the danger zone.

The spokesman added that many villagers refuse to leave their homes out of concern for their livestock, so the agency has put thousands of cattle under the evacuation order as well.

He added that the hot clouds and imminent flows of searing lava are not the only threats. Villagers also face the threat of cold lava -- rain mixed with volcanic matter -- which is already coming down the mountain's slopes. He said the situation has been aggravated by increasingly intense rains as Bali, like other parts of Indonesia, enters the rainy season. 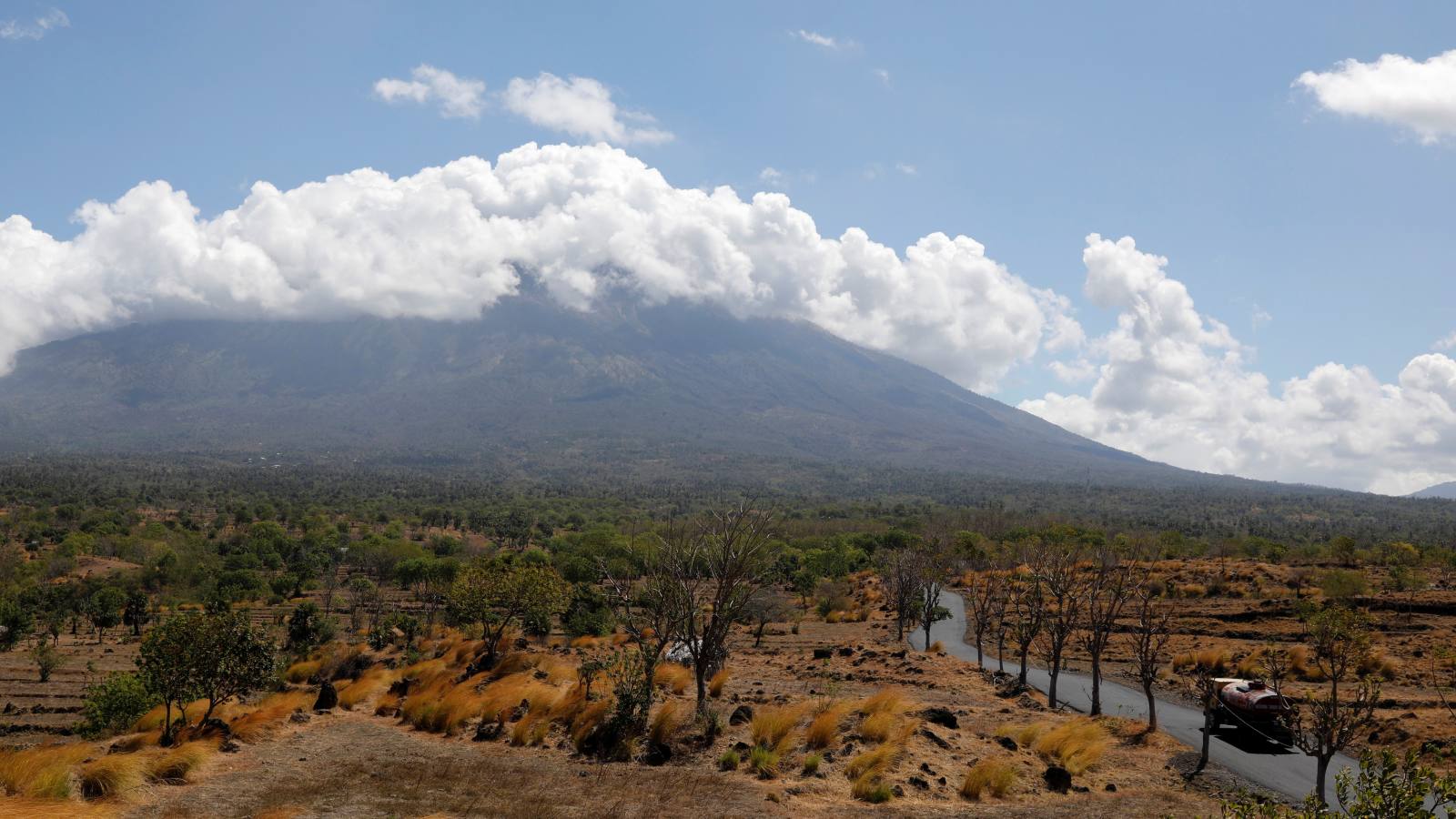 "Some areas around Mount Agung have been flooded with cold lava," Nugroho said.

Bali, one of Asia's top tourism destinations, has been the backbone of Indonesia's efforts to attract more international visitors. For this year, the country has been targeting 15 million foreign tourists, up from 11.5 million last year. Bali is expected to host nearly 40% of the total.

As of October, the Bali tourism agency said the island province had booked 5 million foreign visitors, close to its target of 5.5 million.

After September, however, tourist arrivals began to slow as authorities raised the alert on Mount Agung to the highest level due to increased volcanic activity. The uncertain situation has dragged on; thousands of evacuees had even returned to their homes before last week's eruption.

Lights from fire have been more frequently observed. This indicates that potentially bigger eruptions will soon occur.

Although Mount Agung is situated relatively far from the main tourist sites in southern Bali, the impact on tourism may worsen with the closing of Ngurah Rai Airport. The main airport on neighboring Lombok island, another popular destination, closed on Sunday evening, then reopened Monday morning.

Nugroho said the economic losses resulting from the volcanic activity since September -- mainly in the tourism and banking sectors -- are estimated at 20 trillion rupiah ($1.4 billion).

"The losses in the tourism sector stem from cancellations of flights, hotel reservations and road transport," he said.

The tourism sector employs nearly 9% of Indonesia's total workforce and contributes about 10% to the country's GDP, according to government statistics.

Mount Agung last erupted over the course of a year between February 1963 and January 1964, killing more than 1,500 people.