BANGKOK -- Thailand's military has ruled with an iron fist under the banner of public safety since assuming power in last year's coup. But its credibility as the defender of social order appears to be crumbling after a bombing in the capital left at least 20 people dead and more than 120 injured.

At around 7 p.m. local time on Aug. 17, a blast resounded at Erawan Shrine in Ratchaprasong, one of the busiest areas of Bangkok. Nearby streets were immediately blocked off and ambulances with sirens blaring rushed in and out. It was a chaotic scene, aswarm with police officers, reporters and onlookers. 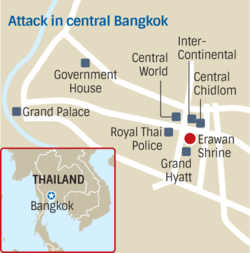 Tensions were heightened even further on Aug. 18, when a bomb was thrown from Taksin Bridge, which crosses the Chao Phraya River, at around 1 p.m. local time. The bomb was likely aimed at a pier beneath the bridge, but it missed and exploded in the water. No one was injured.

Sathorn pier, just 5km southwest of the first bombing site, is a gateway to popular riverside sightseeing spots, such as the Wat Pho temple and Asiatique shopping park.

The attacks caught the junta, led by army chief-turned-Prime Minister Prayuth Chan-ocha, off guard. The past decade saw a feud between Thais who support ousted former Prime Minister Thaksin Shinawatra and those who oppose him intensify, culminating in frequent street demonstrations last year. The military toppled the Thaksin government in a 2006 coup d'etat -- and did the same with a pro-Thaksin government in 2014 -- in an attempt to stabilize the political situation.

After the second bombing, Prayuth said, "Whenever the Thai people suffer, we are even more resolved with the conscience to perform our duties and responsibilities for the country and all citizens."

But he will have to navigate a delicate situation. The terror attack has chilled tourism, which the country's weak economy depends on. If public fear and uncertainty continue, it may affect the restoration of democratic rule, and Thailand's political future would stray further off course.

The military took over last year amid violent clashes between supporters and opponents of then-Prime Minister Yingluck Shinawatra -- Thaksin's sister -- promising to restore peace. Though martial law was lifted in April, Prayuth has continued to exercise his expansive emergency powers enumerated in the interim constitution, arresting many without warrants. Yet such harsh tactics failed to prevent a terror attack.

Recent history offers lessons for Prayuth. Surayud Chulanont, appointed prime minister after the 2006 coup, was an army commander like Prayuth. But on Dec. 31 of that year, during the New Year's countdown, bombings occurred in eight places across Bangkok, leaving at least 40 dead or injured. Because the government, effectively a military junta, failed to protect the citizenry, it lost the people's trust and its reform plans were not fully implemented.

Seeking to avoid that fate, Prayuth has been presenting a sympathetic figure to the wounded public and has promised to do all he can to find those responsible for the deadly attack.

But his government will also have to deal with the attack's effect on the economy.

Exports and consumer spending have stalled due to China's slowdown and repercussions from Yingluck's aggressive economic stimulus policies. Thailand's gross domestic product growth fell from 6.5% in 2012 to 2.9% in 2013 and 0.7% last year. The government revised figures on Aug. 17, projecting growth of between 2.7% and 3.2%. But if the terror attack hurts tourism, the government will have to lower those numbers.

The Thai economy has always relied on tourism, and even more so since the coup. Travel and tourism contributed 2.3 trillion baht ($65.2 billion) in 2014, about 19.3% of GDP. A World Travel & Tourism Council report predicted this would increase. Services for foreign tourists suffered slumping revenues during the political unrest that began in 2013 but recovered swiftly after the coup. The number of tourists for 2015 is set to rival the record of 30 million. Nomura Securities says Thailand's tourism industry made up 1.9 percentage points of the 2.9% year-on-year rise in GDP for the first half of the year.

About 30 Chinese tourists were killed or wounded in the attack. That is especially damaging because China is the country's biggest source of tourists, accounting for roughly a quarter of the total. In the first six months of 2015, China sent over 4 million visitors. Hua Chunying, a Chinese Foreign Ministry spokeswoman, harshly condemned the incident. Li Jinzao, chairman of China's National Tourism Administration, called for "high alert" from guides leading tourists in Thailand.

The Hong Kong government has issued a red travel alert for visitors to Bangkok, its second-highest warning level for "significant threats." The territory's security bureau urged residents to "adjust their travel plans and avoid nonessential travel, including leisure travel."

It put the rest of Thailand on yellow alert, a level that warns visitors to "monitor the situation and exercise caution." Two Hong Kong residents were killed in the blast and two were injured.

Euben Paracuelles, an economist covering Thailand for Nomura, is pessimistic. The bombing "will obviously damage what is already a negative economic outlook, posing further significant downside risks," he said. He noted that tourism has been the economy's "lone bright spot" this year.

In addition to the security concerns, Paracuelles pointed to another headwind for tourism: the yuan devaluation. He predicts the surprise move to weaken the Chinese currency will further dampen arrivals from China.

The Stock Exchange of Thailand immediately felt the effects of the blast. The benchmark SET Index was down all day Aug. 18, closing 36.13 points lower at 1,372.61. The one-day drop of 2.6% was the index's largest in over a year, with the gauge falling back to the level of March 28 last year, when the country was on its way to the May 22 military coup. Aug. 18 trade saw 353 billion baht wiped off the market capitalization.

Shares in Central Plaza Hotel fell 13% on the day after the attack. Erawan Group's stock plunged 11% following the blast at the shrine, which is on the grounds of a hotel it operates. Much of the bourse has taken a hit, with stocks related to tourism and distribution taking the brunt of the impact.

Airlines were affected across the board. Ailing flag carrier Thai Airways International; Asia Aviation, a holding company of AirAsia subsidiary Thai AirAsia; Bangkok Airways; and Nok Airlines all saw their shares tumble between 6% and 9%. Airport manager Airports of Thailand lost 7%.

"I am sure that the incident will have an impact on the Thai economy as tourism is bound to be hit," PTT President and CEO Pailin Chuchottaworn told the Nikkei Asian Review after an earnings conference on Aug. 18, when his company's shares tumbled 6%. Pailin said he hoped the fall would only be "temporary."