DHAKA -- Soaring foreign investment in Bangladesh is giving an added push to the country's booming economy, as multinational companies look to harness its strong domestic demand.

With a population of 168 million, more than a third of whom are 25 years old or younger, and a strategic location in South Asia, Bangladesh is viewed by foreign investors as a strong growth market.

Foreign direct investment in the country surged 68% to a record high of $3.61 billion last year, more than triple the amount in 2011, according to the United Nations Conference on Trade and Development, or UNCTAD.

Other major investments included China's Shanghai and Shenzhen stock exchanges buying a 25% stake in the Dhaka Stock Exchange, a deal that is part of Beijing's Belt and Road Initiative, and a 20% stake in mobile financial services company bKash by Alipay, an arm of China's Alibaba Group Holding. 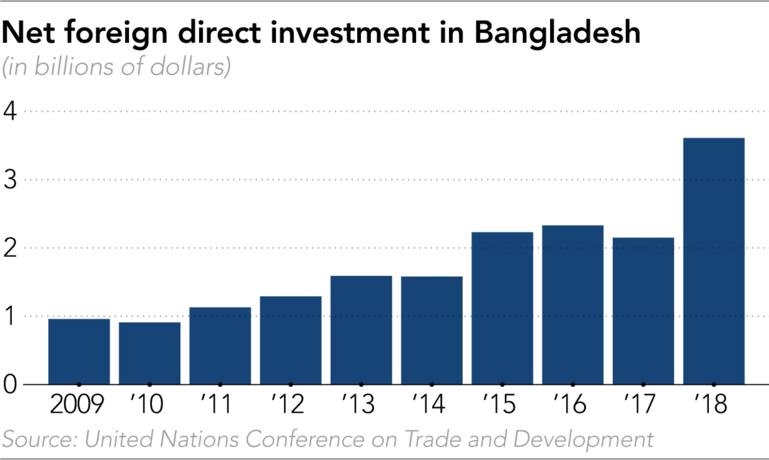 "This underscores the importance of ongoing reforms to enhance the business environment, as well as ongoing investments to develop the country's infrastructure," Ragnar Gudmundsson, the International Monetary Fund's representative in Bangladesh, told the Nikkei Asian Review. He expects a 25% rise in FDI for the fiscal year ending June 2019 compared with the previous year.

The government currently is building metro-rails, bridges, tunnels, elevated expressways, power plants and other projects to plug an infrastructure deficit, with billions of dollars of investment coming mostly from Japan and China.

The development of special economic zones across the country, along with a string of sweeteners, is a key strategy for attracting investment. That has already drawn such Japanese companies as Sumitomo, Sojitz, Nippon Steel, Shinwa and Maruhisa.

Sojitz alone will sink $2 billion into a private port and industrial park at the Mirsarai zone in the port city of Chittagong, according to officials of the Bangladesh Economic Zones Authority. So far, the zones operator has sanctioned land against some $17.9 billion foreign investment proposals.

"Bangladesh is a land of opportunities. You can create value," said Kazi M. Aminul Islam, executive chairman of the Bangladesh Investment Development Authority, or BIDA, an arm of the Prime Minister's Office that is responsible for promoting foreign investments.

In terms of FDI in South Asian countries, Bangladesh stands behind only India, which drew slightly more than $42 billion last year, according to UNCTAD. Of Bangladesh's main rivals in the textiles trade, it was behind Vietnam's FDI of $15.5 billion, but ahead of Myanmar with $3.58 billion, Ethiopia's $3.30 billion and Cambodia's $3.10 billion. 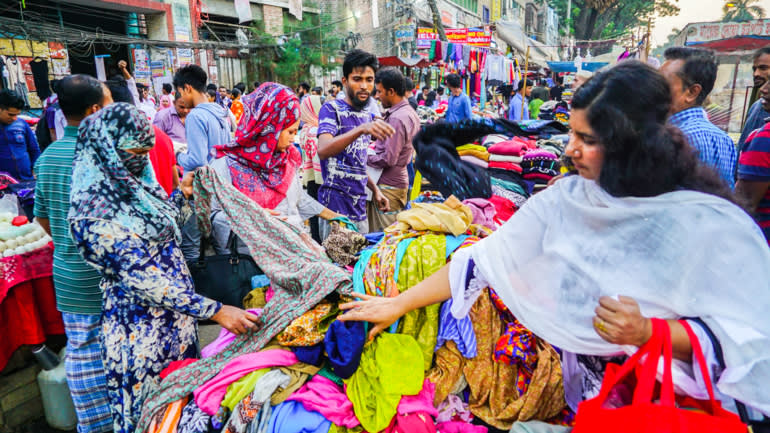 A market in Dhaka. Challenges facing the government of Bangladesh include securing investment for infrastructure, education, health and the social safety net. (Photo by Akira Kodaka)

Zahid Hussain, a former lead economist at the World Bank in Dhaka, says favorable demographics and a geographic location putting it closer to the major markets of India, China and Japan are two of Bangladesh's fundamental strengths.

While Bangladesh scored poorly in institutions and infrastructure, its ranking in the World Economic Forum's global competitiveness index is one of the better ones when it comes to macroeconomic policy, Hussain said. "Despite exchange rate volatility, Bangladesh has managed to stabilize its macroeconomic management," he said.

The picture is similar in other areas of the economy. Exports rose 11% to a record $40.53 billion for the year ending June 30, led by textiles and apparel that alone accounted for more than 80% of the total, according to government data.

Workers' remittances are set to grow 15% in the year ending June 2020, helped by a budget of $362 million for offering a 2% incentive. Finance officials said this will not only boost the flow through banking channels, but it will discourage Bangladeshis living abroad to opt for illegal transfers.

Buoyed by investments, exports and remittances, Bangladesh's foreign-exchange reserves rose to $31.70 billion in June, enough to foot the import bill for more than five months. 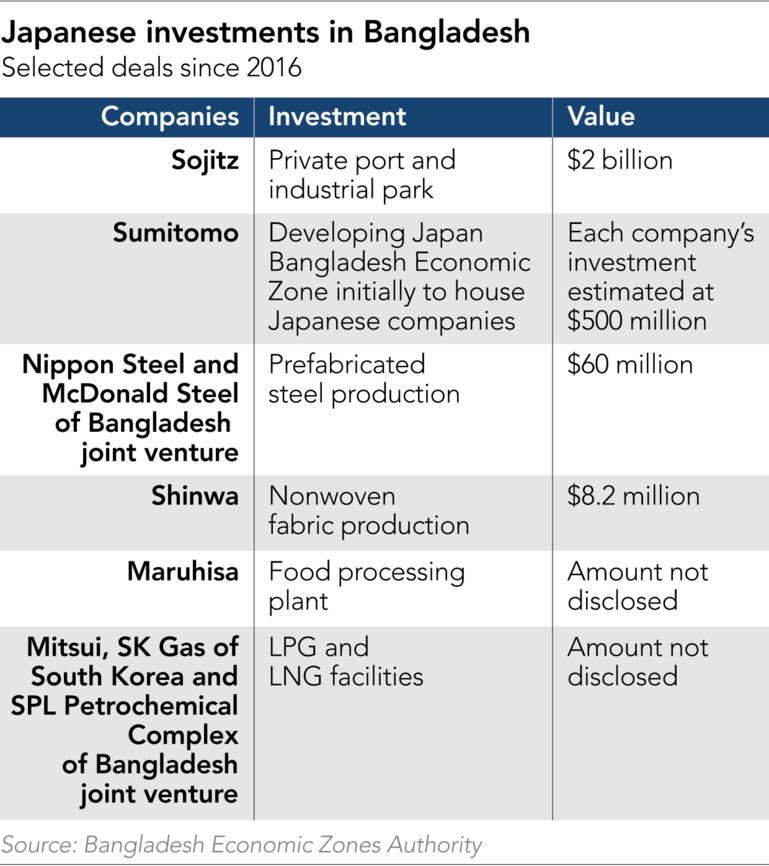 Despite its potential, Bangladesh is still among the least-appealing places to do business. Last year it ranked 176 out of 190 countries in the World Bank's ease of doing business index.

In addition to inadequate infrastructure, a maze of regulations act as deterrents, said Abdul Khalek, who heads up the trade and tax committee at the Foreign Investors' Chamber of Commerce and Industry in Dhaka. For instance, if a manufacturing company wants to market its products, it has to comply with more than two dozen "complicated" laws, he said. "These complexities need to be removed."

Islam of BIDA says reforms are underway to help companies start businesses and get electricity connections faster, while many permits and processes have been curtailed.

Other challenges facing the government include securing investment for infrastructure, education, health and the social safety net. The banking sector also remains a nagging problem, with nonperforming loans hitting a historic high of $12 billion in March, nearly 20% of the country's $62 billion national budget.

Poverty has fallen significantly in recent years, but 22 million people still live on less than $2 a day.

Hussain said that while apparel, agriculture and remittances are key drivers of the economy, there is no "visible progress" in creating new economic pillars, adding that growth will not be sustainable unless there is a substantial increase in investment and productivity.

That said, "If Bangladesh can turn its abundant labor resource into human capital, it will move forward even faster than it has done so far."