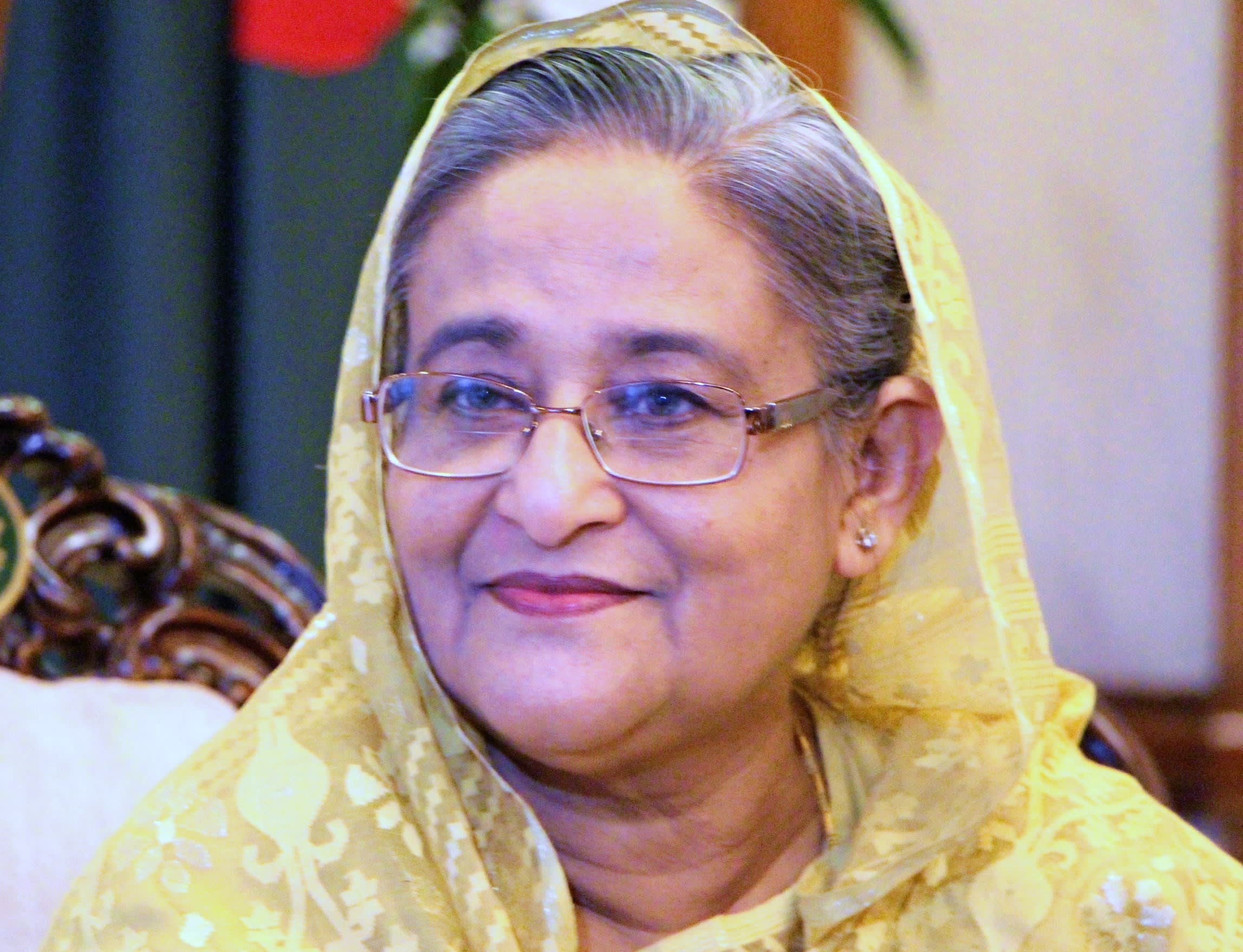 Bangladesh Prime Minister Sheikh Hasina says she places importance on having good relations with neighbors, including China and India.

DHAKA -- Neighborly relations are difficult to maintain in global politics. But Bangladesh will always do its best to be friendly with all, Prime Minister Sheikh Hasina said.

In a recent interview with The Nikkei, she stressed that Bangladesh has tried to improve the rights of workers to help alleviate the entire population.

Q: Bangladesh has had high economic growth in recent years. Its garment industry has done especially well. But there have been strikes, demonstrations and other actions by workers in recent years. After the Rana Plaza incident, in which a building collapse left more than 1,000 dead, what measures has the government taken?

A: The Rana Plaza incident was an accident. It can happen anytime and anywhere, but it was very unfortunate for our poor laborers, who come from villages to try and improve their lives. For them it was very hurtful.

Our government, especially the Awami League, does politics for poor people. We started helping distressed people immediately. Before, when an incident like this happened, the government would carry out rescue operations for two to three days. We feel for our workers, so we continued operations for 21 days and immediately provided support to the families. We did everything we could.

We have allocated land for building a garment village so that businesses can build there, and the workers get a good environment. Also, we are building hostels and dormitories for the female workers, so they can live in safety. We don't want a repeat of an incident like this to take place ever again.

Q: Does Bangladesh have a target for gross domestic product growth?

A: Yes, of course. In 2008, when we won the election, there was a global recession. It was a hard time. Before that, there was no democracy, there were emergency polls for two years, everyone was harassed by the government. There was so much terrorism.

Due to all this, the economy couldn't grow. We formed the government at a very critical time. Besides that, we started achieving our GDP targets. We are able to keep our GDP growth above 6%. Our target is that by 2021, we will achieve 8%. In the future, we may even achieve 10%. We will be able to achieve 8% before 2021.

We are implementing economic policies and our annual development program. We always implement up to 95-96% of the measures we consider, even though we face many problems, such as natural calamities. If the inflation rate is lower than GDP, it means the fruit of the economy goes to the common people. We will develop Bangladesh as a middle-income country. We try to follow Japan -- from an agricultural economy to industrialization. We are basically an agricultural economy. We are self-sufficient in food.

Q: India's new Prime Minister Narendra Modi is a Hindu nationalist. Do you have any concerns regarding your relationship with India in the future?

A: India is our neighbor, and, as you know, I place a lot of importance on neighbors. We want good relations. In India, the government may change. In my tenure, I have worked with four different governments in India, and we have had good relations with all of them. Modi may have his own ideology but relations remain country-to-country. We will have friendly relations.

During my first tenure, we solved the problem of Ganges water. We signed a bilateral treaty on sharing Ganges water.

Q: China is expanding its military presence in the South China Sea and Indian Ocean. It is a matter of great concern for some countries. What is your strategy? Also, what about your relationship with the U.S., Japan and others?

A: I have already replied to one part by saying that I want friendship with everyone. South Asian countries are resourceful and poor. I believe that all countries should work together. We should think of our people and ensure better lives for them. One country can't work alone, everyone has to cooperate. Asian countries are the most resourceful. We can develop a lot if we work together.

Though countries like Nepal and Bhutan are very small, we value them, even Myanmar. We want a friendly atmosphere to remain. Problems are there, but each country needs to respect the rights of other countries and not interfere in their affairs. The time has come for all Asian countries to work together. Our focus should be the poor, but for this we need a friendly atmosphere.

Q: Is Bangladesh planning to buy a submarine from Russia? Weapons from China?

A: When you plan to purchase something, you first look at what quality you can get at the best price. We have made many purchases from the U.S., China and many other countries. But you always consider if the purchase is favorable or not. We have been searching for a submarine at a suitable price. It depends on where we get a good offer from. It is necessary.

Energy is key to development, and unfortunately our people suffer a lot because of a lack of power. In 1996, we had only 1,600 megawatts of power, but demand was tremendous. Only 3-4% used to get power. That is when I opened energy up to the private sector, and public-private development took place. We increased power production to 4,300MW, but it is very unfortunate that after seven years, when I came back to power for the second time, electricity generation was only 3,200MW instead of 4,300MW. No development took place between.

We decided to use different ways to produce energy, like renewable energy, coal based, hydroelectricity and nuclear power. We are going to establish a nuclear power plant with the help of Russia. Since 1964, the place for the plant has been decided, but no progress was made. Now we have started. For development, we have to increase power generation.

Q: The legitimacy of your government has been questioned by the U.S. and some other countries, due to the lack of opposition participation. How do you plan to convince investors your government is legitimate?

A: Whether a government is legitimate or not, who decides? Our people. Comment from other countries does not matter. During elections, many political parties participated, but Jamaat-e-Islami and the BNP (Bangladesh National Party) didn't. That is their decision. No one can force them. They participated, for example, in local government and municipality elections.

What the U.S. (government) says, I don't understand it. I have seen in my life three martial law governments, military rule. We have had it several times -- it is extraconstitutional power. They violated rules and declared themselves in power. Here, voter turnout is more than 40%. How can you say it is not legitimate?

Now they (the parties that did not participate in elections) must be thinking they have made a political blunder. That is why they participated in local elections, so now they have no right to say anything. When there is no election, the situation can turn out to be like Thailand, because of one court verdict. Instead of democracy, they brought back military rule. Maybe our opposition had this in mind. The Awami League has established good governance. Only a democratic system can develop an economy.

After the fifth general election, peace has been restored, and law and order is under control. This is visible to foreign investors. This quarter's GDP will also be above 6.1% due to good governance. We enjoy people's confidence. People want to live a better life, and they know only we can provide this. We do politics for people not for business. Anyone who raises this issue is mistaken. We are a sovereign nation.

A: We want more investment from Japan. As you know, economically, we are doing very well. Our GDP (growth) is above 6%, our per-capita income has increased, which has created a congenial atmosphere for investment. We have a good workforce. We facilitate all sorts of support for investors. We have decided that some areas of land we have selected will be given to investors, and it is up to them how they use it.

For Japan, we have allocated land. There are many sectors, such as energy, gas exploration, garments, small machines and tools. It is up to the investor. We will just be the facilitators. We have plots for special economic zones. Japan will get first priority.