DHAKA -- The novel coronavirus threatens to scupper Bangladesh's run of strong economic growth, which has averaged 7% over the past decade.

But Bangladesh has an overseas lifeline: In June, an estimated 12.5 million Bangladeshis, working in more than 170 countries, wired home a record $1.83 billion. That raised the country's foreign exchange reserves to an all-time high of $36.14 billion. Remittances, equal to almost 6% of gross domestic product, are a pillar of the Bangladeshi economy.

Inflows had been falling since February, when monthly remittances dropped to $1.45 billion, before rising again in May, when they reached $1.5 billion. Many Bangladeshi migrants have lost their jobs due to the COVID-19 outbreak, especially in the Middle East, which hosts 80% of Bangladesh's overseas labor force. While outlook remains gloomy, bankers predict remittances will rise over the next two months.

For countries like Bangladesh, the International Monetary Fund estimates foreign reserves should cover three to nine months of imports. Bangladeshis working for waste management company RAMCO, gather at a company dormitory in Biakout, near Beirut, in May.   © Reuters

At the current level, Bangladesh's reserves, which are mostly in dollars, are adequate to foot about six months worth of import bills.

"We think that this would not be the best use of the country's foreign exchange reserves," Ragnar Gudmundsson, resident representative of the IMF in Dhaka, told the Nikkei Asian Review. "Given the uncertain external outlook, Bangladesh's foreign reserves buffer should be preserved," he said, adding that maintaining an adequate reserves cushion is "essential" at the moment.

One reason for Bangladesh's swelling reserves is fast-tracked lending support. In late May the IMF approved $732 million in emergency loans to help the South Asian country deal with the blow to its balance of payments and budget from the pandemic. That fiscal support totaled $1.6 billion when contributions from the World Bank and the Asian Development Bank are included. 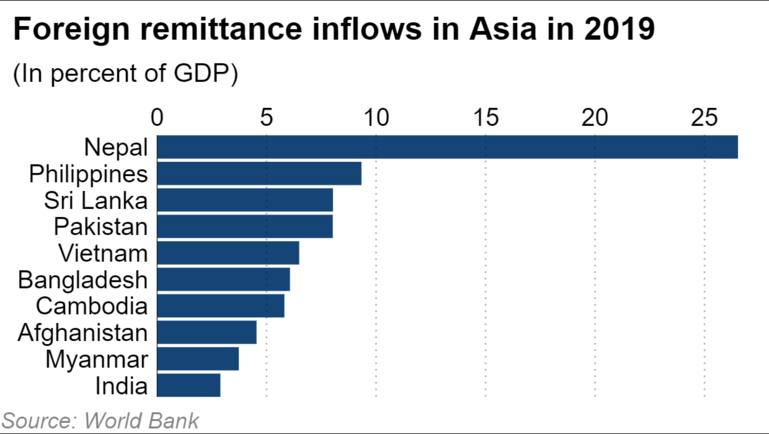 Bangladesh is desperately seeking new sources of financial firepower to fund its $67 billion budget, as coronavirus has slowed tax collection. Initial data show the country's tax receipts shrank for the first time ever in the fiscal year ended June, with tax authorities collecting $25.36 billion, down from $26.42 billion a year earlier.

While remittances remain an unexpected bright spot, clothing exports, which make up 83% of the country's annual merchandise shipments, slid 18% in the year through June. Now the flow of cash from migrants threatens to dry up as well, as more than 1 million workers are likely to be sent back from Gulf countries this year.

Mustafa K. Mujeri, executive director at the Institute for Inclusive Finance and Development, a think tank in Dhaka, is skeptical the government's fiscal plans can succeed.

"Infrastructure investment is a long-term investment ... and risk factors for long-term investment [are] high," Mujeri told the Nikkei Asian Review. "Our past experience in public-sector investment is not good," the former chief economist at Bangladesh Bank said, adding that he fears any unforeseen global shocks may weaken the country's economic base. And borrowing from foreign reserves might affect the exchange rate and stoke inflationary pressure, he said. Bangladeshi Prime Minister Sheikh Hasina asked the Finance Ministry and central bank to look into whether foreign reserves can be used to finance infrastructure spending.   © Reuters

"Reserves are sitting idle," Islam, who now teaches economics at BRAC University in Dhaka, told Nikkei. The government, he argues, can take out up to $3 billion from the reserves, but the money should be used cautiously. Islam said he doubts the current level of reserves can be sustained because imports will rise if the economy gathers pace.

The government first mooted the idea of using foreign reserves to bankroll the construction of the country's longest bridge over the Padma River after the World Bank withdrew a $1.2 billion credit line in 2012 over corruption allegations. But the plan fell flat after funds were stolen from the central bank 2016, forcing Bangladesh to turn to China for bridge financing.

"There is no scope for Bangladesh Bank to provide loans to the government. We can [only] lend out to banks," said the official, who requested anonymity.