Bank Indonesia seeks to stem the decline of the rupiah, which has hit levels not seen since the Asian financial crisis.   © Reuters
SHOTARO TANI, Nikkei staff writerSeptember 27, 2018 17:16 JST | Indonesia
CopyCopied

JAKARTA -- Indonesia's central bank raised its key interest rate for the fifth time in six meetings, wary of the potential for further currency depreciation after the U.S. Federal Reserve raised its benchmark rate for the third time this year.

Bank Indonesia decided on Thursday to lift its seven-day reverse repo rate to 5.75% from 5.50%. The central bank has increased the rate at all but one meeting since May, boosting it by a combined 150 basis points as it seeks to stem the decline of the rupiah.

"BI’s stance remains hawkish, pre-emptive and ahead of curve," said Perry Warjiyo, governor of Bank Indonesia, at a news conference after the monetary policy meeting. "But [implementation] really depends on development and global and domestic economic dynamic, including the development of Fed normalization, trade tension and global investors’ behavior in regards to Indonesia. How our policy will be in next month or after? It will be very data dependent."

Despite the central bank's rate hikes as well as the government's measures to protect the currency -- raising taxes on importers of more than 1,000 consumer goods and widening the use of biodiesel to curb imports, among other steps -- the rupiah has fallen more than 9% since the start of the year.

Investors sold off rupiah assets as crises in other emerging markets sparked fears of contagion. The escalating trade war between the U.S. and China has also weighed on investor sentiment.

The rupiah hit 15,016 to the dollar in early September, its lowest level against the greenback since the Asian financial crisis in 1998. 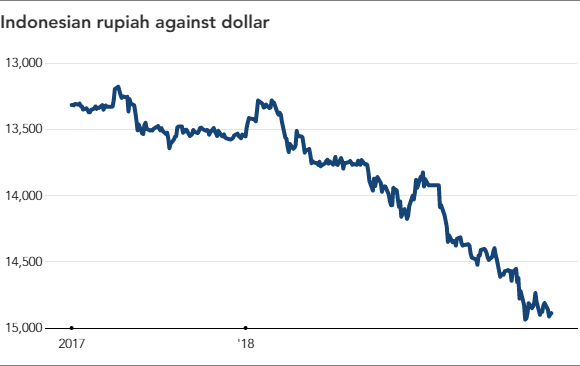 Bank Indonesia's latest hike was partly a response to the Fed's increase the day before. The benchmark federal funds rate was raised by 25 basis points to 2.00% - 2.25%, which could translate into a stronger dollar in the near future.

The rupiah came under renewed pressure last week when the archipelago nation recorded a $1.02 billion trade deficit for August, larger than the market expected. The cumulative deficit of over $3 billion for the first two months of the current quarter is more than double the current-account deficit recorded for the previous quarter and "does not bode well for the currency," Kunal Kundu, economist at Societe Generale, said in a report.

Thanks to Jakarta's efforts to curb inflation, like renewed fuel subsidies, prices are relatively stable, with the annual rate of inflation for August clocking in at 3.20%, well within Bank Indonesia's target range of 2.5% to 4.5%.

A further fall in the currency, however, could drive up import costs and put upward pressure on headline inflation down the road. This is something President Joko Widodo, who is running for a second term in next year's presidential election, does not want.

Bank Indonesia also decided to introduce a measure called "Domestic Non-Deliverable Forward" transaction with the aim of reducing the volatility of the rupiah. NDF -- a currency hedging contract to buy or sell currencies within a certain period of time using a predetermined exchange rate -- is only available in large foreign exchange markets like Singapore or London, but Bank Indonesia will now make it possible for those who need to hedge currencies to make the transactions in the Indonesian market.

The DNDF will be introduced "to accelerate the forex market deepening and provide alternative hedging instruments for banks and corporations," the Bank said in a statement.