Bank of Japan still has that sinking feeling TOKYO -- April 4 marks the third anniversary of the introduction of the Bank of Japan's "quantitative and qualitative" monetary easing policy. Yet the battle against the country's persistent deflation is far from being won.

Corporate earnings in Japan look set to hit a record in the fiscal year to March, but the gloomy inflation outlook is discouraging business owners from increasing capital investment or raising wages. Abenomics, Prime Minister Shinzo Abe's reflationary policy mix, is losing the tailwind of a weaker yen and higher stock prices. And it is unclear whether the BOJ's negative interest rate will help the central bank achieve its 2% annual inflation target.

"If necessary, we will devise additional stimulus measures from the quantitative, qualitative and interest rate dimensions," BOJ Gov. Haruhiko Kuroda said at a press conference March 15, expressing determination to put the country's deflation behind it. 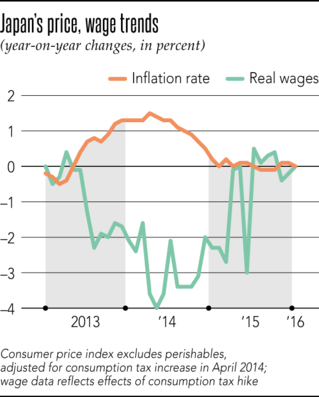 Initially the new program drove down the yen and propped up the stock market, which in turn pushed up the consumer price index. Inflation, excluding fresh food prices, hit about 1.5% at some points, not far from the BOJ's target. But the effects have since worn off and inflation has been hovering near zero lately. Businesses and household inflationary expectations are weakening. With no exit from the program in sight, the BOJ is in a bind.

What went wrong? The Japanese central bank did not figure on such a weak world economy. Low crude oil prices are holding down inflation, and a slowing Chinese economy has raised doubts about that growth engine. The U.S., which was expected to continue to tighten its own ultraeasy monetary policy, has been forced to move more slowly.

That put a floor under the yen, depriving the Japanese economy of "the most effective conduit for the QQE program," as Yuji Shimanaka of Mitsubishi UFJ Morgan Stanley Securities describes it. And companies are becoming increasingly wary about the economic outlook. The BOJ's latest Tankan quarterly business sentiment survey, published Friday, showed that large manufacturers' confidence gauge has slipped back to where it was immediately after the introduction of the new easing program.

Confidence is also eroding among services and small and midsize companies, a worrying sign that domestic demand may be falling, too. "The domestic economy, which has been considered solid, is also at risk now," a BOJ official said.

"The tide has turned in the business environment," said Akio Toyoda, president of Toyota Motor. With companies averse to capital spending and raising pay, the current favorable economic cycle is in danger.

Yet Kuroda remains optimistic. "The European Central Bank has its rate set at minus 0.4%," he said, hinting there is room for the BOJ to lower its rate still further from the current minus 0.1%. As he expects the battle against deflation to be a prolonged one, Kuroda is apparently trying to fend off criticism that the easing effort has run its course.

The BOJ's negative interest rates are putting downward pressure on other rates. The yield on benchmark 10-year Japanese government bonds has fallen below zero, and commercial lending and mortgage rates are also gradually declining. "The easing will surely make an impact, even if it takes time," a bullish BOJ official said.

But the negative interest rate policy is unpopular with financial institutions and the elderly, who tend to hold large savings. How far the BOJ will press ahead with the controversial policy is not clear. Also, if the overseas slowdown continues, the bank may have to again push back its target date for achieving 2% inflation from the current estimate of around the first half of fiscal 2017. Concerns about the possible side effects of the BOJ's monetary easing, such as rising property prices and a JGB bubble, are growing.