SEOUL -- Speaking after the Bank of Korea held its key interest rate for the 11th straight month, Governor Lee Ju-yeol sent a strong signal that the central bank planned to raise rates next month.

"It is time to focus on the financial stability more than before," Lee said. "As financial imbalances are increasing, we will reflect this in our monetary policy. We will make a decision based on stability and principles."

The central bank kept its benchmark rate at 1.5% on Thursday, in a move aimed at propping up a flagging economy and addressing issues such as record-high household debt. The inaction was forecast by 14 out of 21 respondents to a Reuters poll of analysts, while 17 of 19 expect a hike in November.

Lee said that two of the seven-member monetary policy board called for a 25 basis point increase at the meeting.

President Moon Jae-in's government has been pressuring the BOK to raise rates out of concern that the easy monetary policy is contributing to soaring housing prices in Seoul. A move next month may be justified with inflation inching toward the bank's 2% target and concerns over capital leaving the country as the rate gap with the U.S. widens.

"We will decide how we will adjust the level of accommodation by monitoring growth and inflation," the central bank said in a statement. "In addition, we will pay attention to trade with key partners, monetary policies of major central banks and geopolitical risks."

Kim Jin-wook, an economist at Citibank in Seoul, said he expects the BOK to hike in November. "This meeting was a hawkish hold," he said. 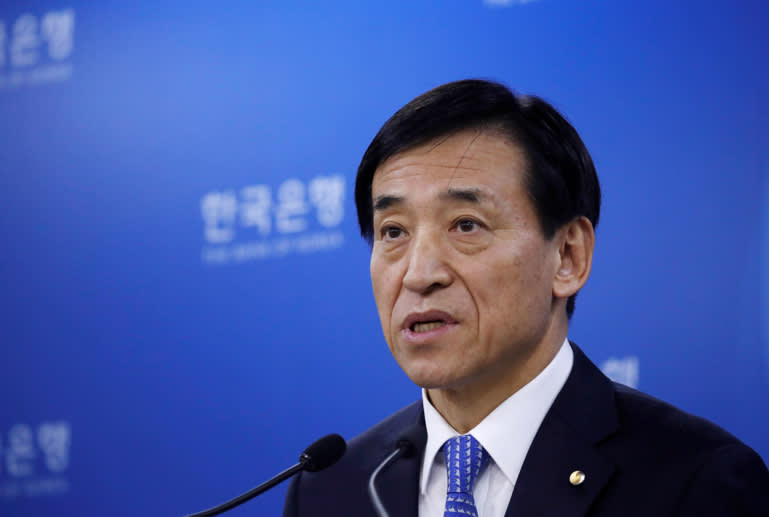 "The governor gave strong message to hike the rate next month," said Oh Suk-tae, an economist at Societe Generale. "But, I think it won't be easy for the BOK to raise it further next year due to uncertainties in the economy."

Oh said before the decision that the jump in Seoul condominium prices in the summer has become a nationwide issue. The index of prices in the capital rose by almost 10% over the past year, which prompted the government to intervene in the market with plans to provide tens of thousands of homes in Seoul and surrounding areas.

Analysts say the BOK should be worried about the widening interest rate gap with the U.S. Federal Reserve, which raised its benchmark rate to a range of between 2% and 2.25% earlier this month, and signaled further hikes this year.

The BOK is also keeping a close eye on the worst unemployment figures since the global financial crisis. This has sparked a public backlash against Moon, whose support rate in a Gallup Korea survey dropped to 49% in early September, the lowest since he took office in May 2017.

South Korea is set to cut taxes on oil products this month, in its latest bid to prop up a stuttering economy by putting more money in the pockets of consumers.

The tax cut -- expected by analysts to be at least 10% -- is part of the finance ministry's blueprint to create more jobs. President Moon Jae-in's aggressive minimum wage hikes have exacerbated a growing unemployment problem -- the jobless rate hit an eight-year high in August -- as small business owners lay off part-time workers to hold labor costs down.

Last week, the International Monetary Fund lowered its 2018 growth forecast for South Korea to 2.8% from 3%.