Lagging accessibility and economy behind decline, while Tokyo stays atop Asia TOKYO -- Beijing and Shanghai fell sharply in a recent ranking of the world's most appealing cities, as their accessibility and declining local economies impacted their "magnetism," or comprehensive ability to attract people.

While Tokyo remained unchanged for the third year in a row at third place, the highest among Asian cities, it saw the rise of Asian peers Singapore, Seoul and Hong Kong in factors where the Japanese capital lags in competitiveness.

The drop of China's two leading cities was partly due to a revision of the indicators, which reflected changes in thinking about the requirements for a city to be globally competitive. Beijing, scoring 1,088.5 points overall, had low scores for business support services and traffic congestion, indicators newly added this year. 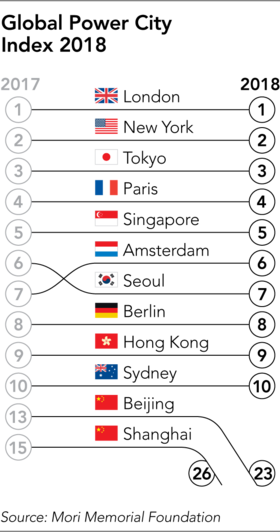 Shanghai scored 1,072.0 points in total. It lagged at 38th in variety of workplace options, an indicator that combines a conventional evaluation of office area per person and the newly introduced number of co-working spaces.

"Shanghai used to attract companies with its low corporate taxes but this strength is less prominent today," said a press officer for Mori. North American cities including San Francisco and New York raised their scores thanks to the robust U.S. economy and corporate tax cuts.

The top five cities were London, New York, Tokyo, Paris and Singapore, the same positions as last year. Despite not ranking as high as the top two cities, Tokyo, with 1,462.0 points, was highly evaluated due to its improvement of total working hours. Its strength was in factors such as number of companies and employees, but the city still has room for improvement in its gross domestic product growth rate and human resources. It is expected to beef up its commitment to climate action.

However, Singapore and Hong Kong face the challenge of some of the highest housing rents, as well as lower wages. Seoul saw its ranking decline to seventh from sixth last year, as it was overtaken by Amsterdam.

Among other Asian cities, Taipei raised its place to 35th from 36th last year, while Kuala Lumpur dropped to 32nd from 31st, and Bangkok to 36th from 33rd.