NEW DELHI -- For Imran Khan, the man set to become Pakistan's next prime minister, the results of the July 25 general elections represent a victory that has been two decades in the making, but could not have come at a more inopportune moment.

Khan's Tehreek-e-Insaf party, the second largest opposition group before the election, ran a campaign focused on improving social security, but delivering on its promises will be a formidable challenge at a time when state finances are in a critical state.

Foreign reserves have been cut in half by the previous government's spending on infrastructure projects supported by China's Belt & Road Initiative.

Within the next three years, the country's debt payments will amount to more than half of its overall tax revenue. But seeking aid from the International Monetary Fund is likely to draw criticism at home as well as from abroad.

Upgrades to one of Pakistan Railways' main lines are typical of the expenditure committed to Belt and Road projects.

"I am satisfied with the train service for its punctuality," said Owais, a 17-year-old at Golra Sharif station in the Islamabad suburbs, who was on his way to his hometown some 40 km away.

But only three trains running in each direction stop at the station every day, despite it being on one of the country's trunk routes, and they are all pulled by aging diesel locomotives.

Work on modernizing the line, which involves laying double track along its entire length and introducing an automated operation system, is scheduled for completion by 2022. When the overhaul is finished, passenger trains will run at a maximum speed of 160 kph.

The project is a key part of the China-Pakistan Economic Corridor infrastructure development program, and its total cost is estimated at $8.1 billion, which will be financed by the Chinese government. Approximately $62 billion will be spent on CPEC projects, mostly coming from Beijing. The initiative, which serves as a model for other Belt and Road programs and got going in earnest during the first half of 2015, also involves building power plants, roads and ports.

Pakistan's economy grew at over 5% for two straight years to the end of June. Investment contributed 20% to 30% of the expansion, and heavy infrastructure spending has undoubtedly powered the growth.

But the risks are now starting to become clear.

One consequence of CPEC has been a considerable increase in imports of Chinese products such as construction materials. Pakistan ran a trade deficit of over $10 billion with China in fiscal 2018, a fivefold jump in five years. As a result, the country's overall trade deficit grew to $31 billion, wiping out $10 billion of foreign-exchange reserves in the past two years. The country was left with a mere $9 billion in foreign-currency deposits as of July 20, less than enough to cover two months' worth of imports.

Total tax revenue stands at around 13% of GDP, half of which will be needed to pay back foreign debts, meaning the government will have severely limited fiscal leeway.

The Center for Global Development, a U.S. think tank, warned in a report in March that Pakistan was one of eight countries "at particular risk of debt distress based on an identified pipeline of project lending associated with BRI." With the PTI winning over 40% of the single-seat constituencies in last week's vote, Khan will attempt to form a government, and could be sworn in as early as August 11, according to reports.

The former cricketer's "plans to boost social spending will have to be shelved" due to budgetary constraints, according to a report published last week by London-based think tank Capital Economics.

Many market players predict that turning to the IMF will be inevitable. "The new government will approach the IMF for a program as a matter of urgency," according to the U.K.'s Standard Chartered Bank, and this is expected “to happen soon after a cabinet is in place."

Such a move would not be unprecedented. Pakistan received $6.1 billion in aid from the IMF between September 2013, soon after the previous government of Nawaz Sharif was inaugurated, and September 2016.

Khan's bid to access IMF capital, however, will likely face opposition both at home and abroad.

The terms of China's loans to finance CPEC projects have not been disclosed. If the IMF demands to see the books, Beijing could object, jeopardizing the entire CPEC program -- the driver of Pakistan's economic growth.

The Pakistani military, which allegedly supported the PTI during the campaign, could also disapprove.

"Since the Pakistan army has been benefiting from CPEC projects through its construction wing and other business units," said Tridivesh Singh Maini, assistant professor at OP Jindal Global University in Delhi, "the army will never allow the new government to exit from CPEC." 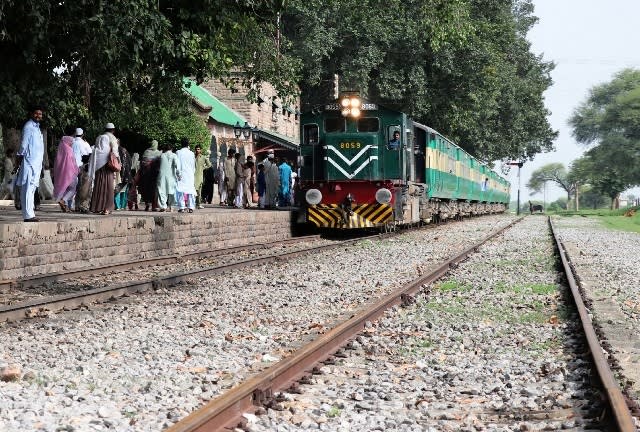 One of Pakistan Railways' main trunk routes is being modernized with Chinese assistance. (Photo by Hiroshi Kotani)

The one policy option remaining would be to seek additional financial aid from China, which holds the world's largest foreign currency reserves. That would entail Islamabad borrowing from Beijing in order to repay its debts to Beijing.

Pakistan's fiscal crisis is not the only area of concern for the international community. Pakistan is a nuclear-armed state, as is India and the two countries are locked in a decadeslong territorial dispute over Kashmir. China exerting greater influence over Pakistan could lead to a realignment of the global power balance.

The U.S. has urged Pakistan to play a more active role in tackling the security situation in neighboring Afghanistan. But the country will find it difficult to respond to the calls if its financial health deteriorates further.

Several parties, including Sharif's Pakistan Muslim League-Nawaz, have rejected the results of last week's vote, claiming it was rigged. Some opposition groups have threatened to boycott parliament and are demanding a rerun of the election.

If Khan does manage to form a government, he will either have to persuade the military and Beijing to give their blessing to him seeking help from the IMF, or make the country even more dependent on Beijing.

Nikkei staff writers Hiroshi Kotani in Bangkok and Tahir Khan in Islamabad contributed to this report.