TOKYO -- The battle to capitalize on blockchain technology is heating up in the mainstream financial sector. Wary of newcomers stealing their thunder, established institutions are giving the system a try.

Blockchain technology, which underpins the bitcoin cryptocurrency, creates a public record that is shared among users' computers. When a change is made, each computer's copy of the ledger is compared, ensuring accuracy and preventing tampering.

Bank of Tokyo-Mitsubishi UFJ, one of Japan's megabanks, recently created its own digital currency on a trial basis. The name: MUFG coin. The bank came up with the idea last autumn and ordered software, spending several million yen. A team of about five employees is currently testing it. 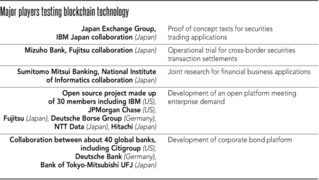 Since all participating computers share the database, the system does not require the large data servers typically needed for managing digital transactions.

Mitsubishi UFJ Financial Group, the bank's parent, is also part of an international alliance that this month ran a successful trial issuing bonds on a blockchain-based trading system. The alliance includes about 40 global institutions, including Citigroup of the U.S. and Deutsche Bank of Germany.

Meanwhile, Japan Exchange Group -- the operator of the Tokyo Stock Exchange -- and IBM Japan are set to start a joint research project on blockchain technology.

Big financial institutions are embracing the technology, in part, because they fear it. Since it is relatively easy to use and entails low costs, new players -- even small businesses without much capital muscle -- could conceivably use it to offer financial services, too.

Orb, a developer of decentralized cloud computing systems in Tokyo, is reportedly in talks with eight regional banks concerning a system for issuing digital currencies by region.

Orb CEO Masaaki Nakatsu said the company aims to create a mechanism that allows money to be locally produced and locally consumed. This, he said, would change the country's centralized financial system, in which money flows into Tokyo.

Spain's Banco Santander estimates that blockchain technology could lower its annual costs by up to $20 billion by 2022.

Beyond banking, experts see uses for blockchains in a range of fields, including real estate and music rights management.