Spinoff elicits skepticism from some of the country's cryptocurrency players

BANGKOK -- It has been a turbulent few months for technologists, investors and regulators with an interest in bitcoin, the world's most widely circulated cryptocurrency. After weeks of market fluctuations, a long dispute over how to cope with surging global transactions came to a head on Aug. 1, with a split of the currency into two variants: the original bitcoin and the new Bitcoin Cash.

After the separation, bitcoin's market value recovered and reached new heights. The spinoff, meanwhile, attracted a fair amount of support in its initial days but still faces an uphill battle to win over cryptocurrency businesses.

And after all of this, the original bitcoin community still needs to settle on ways to manage the currency's popularity.

The experts who run the digital ledger, or blockchain, behind all bitcoin transactions have been divided over two options for upgrading the ledger's capacity -- and thus its speed.

One is to abolish the limit on the recording capacity of a single page, or block, of the ledger. The other is to reduce the information that is recorded on each transaction, freeing up room for a larger number of payments on a single block without altering the actual capacity.

In the original blockchain, a single block is designed to hold no more than 1 megabyte of data. This limit has become a bottleneck due to the ever-growing number of bitcoin transactions.

At a gathering in New York in late May, over 80% of the bitcoin expert community agreed on a solution that, essentially, mixed the two methods. The experts reaffirmed the deal, called the New York Agreement, in late July, giving the go-ahead for implementation to start on Aug. 1.

When that day arrived, a group that did not completely agree with the solution broke away to launch Bitcoin Cash. In the new currency's blockchain, one block is programmed to contain up to 8MB of data, and the limit is a variable parameter that can be changed if necessary.

Media reports tended to portray the split as the consequence of a civil war. The reality is more nuanced.

A major supporter of the Bitcoin Cash developers was Bitmain Technologies, one of the world's largest bitcoin "miners." Yet, the Beijing-based company was on board with the New York Agreement and remains "committed" to its implementation, according to a Bitmain marketing manager.

Therefore, as of Aug. 9, none of the company's major mining sites was mining Bitcoin Cash blocks, the manager stressed.

The company's position is that it supported the precursor technology to Bitcoin Cash as a "contingency plan" for a possible breakdown of the original bitcoin system due to the implementation of the New York Agreement. But as of early August, it has not seen fit to set the contingency plan in motion.

In a news release dated July 24, Bitmain said it may end up supporting both the post-upgrade bitcoin and Bitcoin Cash.

The actual launch of Bitcoin Cash was executed by releasing new blockchain software from an open-source developer consortium called Bitcoin Unlimited, led by a U.S. scientist and other engineers supporting them. The first to provide practical support for the new currency was ViaBTC, a Chinese digital exchange.

The Shenzhen startup was reportedly the first company to provide a mining resource for its customers (small miners) to successfully mine the Bitcoin Cash blockchain. The company had listed Bitcoin Cash as its trading currency on July 22, long before the official launch and much earlier than anyone else. On Aug. 1, Bitcoin Cash trading was most active at ViaBTC, compared with other cryptocurrency exchanges.

"We simply provided an option to our users," said Haipo Yang, ViaBTC's founder and chief executive, denying his company "led" the split. He said several individual miners and major bitcoin-related service provider Bitcoin.com are also engaged in Bitcoin Cash mining. A few other miners he knows are waiting for the right time to start.

Miners use huge amounts of computing power and electricity to generate a new "block" of the blockchain. Their compensation? Newly issued coins.

Roughly 70% of bitcoin mining resources are located in China.

Apart from ViaBTC and its associates, many miners in China seem skeptical about Bitcoin Cash's long-term prospects. Some have called the spinoff "a currency version of a fake iPhone," like the ones often found at Beijing electronics stores.

An executive of a major player with mining facilities in Sichuan and Inner Mongolia said his company will probably stay away from Bitcoin Cash, given the risk that an investment might return nothing.

Failure to attract enough miners would slow the issuance of Bitcoin Cash and limit its circulation. This would cause consumers and investors to shun the currency, likely causing it to fade away.

In the first week after its flotation, the value of Bitcoin Cash relative to its forerunner moved between 6% and 25%. The ratio settled in the 7% to 8% range the following week, as of Aug. 9. The ratio declined mainly because the exchange value of the original bitcoin surged on Aug. 5, touching a record high of $3,327. The bitcoin price has since been moving between $3,200 and $3,400, reaching yet another high on Aug. 7 in the U.S. 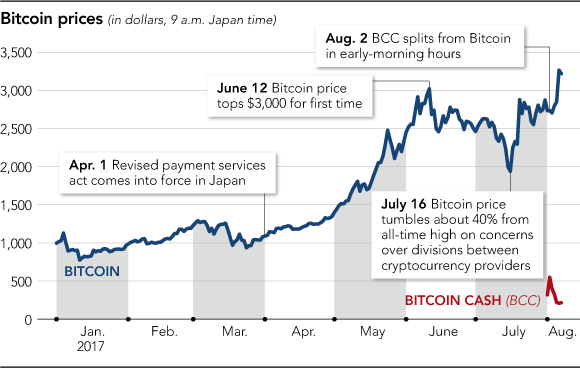 The linkage between the sister currencies seems to be weakening by the day. Mitsuru Iwamura, a former central banker and an economics professor at Waseda University in Tokyo, said the variants are "mutually independent currencies," now that the value of Bitcoin Cash is determined by a separate market. This means Bitcoin Cash's value will hinge on the extent of mining and transaction activity.

The original currency still faces its own share of uncertainty.

The split may have answered the concerns and complaints of the opponents of the New York Agreement, but the agreed-upon methodology still carries risks. Many experts anticipate further debate among the signatories over whether the blockchain upgrade, scheduled for November, should be carried out as planned.

Some experts warn that such friction could lead to another bitcoin split before the November deadline. Others caution that while the community might succeed in avoiding another breakup, the bitcoin blockchain itself could collapse.