Bitcoin surges to all-time high on regulatory changes in Asia

TOKYO -- The price of bitcoins surged nearly 30% in April, and reached all-time high in the first week of May, partly due to regulatory changes in Asia.

According to bitcoin information provider CoinDesk, one bitcoin bought more than $1,500 on May 4 for the first time, reaching a record high of $1,588 at one point on May 5.

The price of bitcoin is determined solely by demand; higher prices mean more people want to buy it. 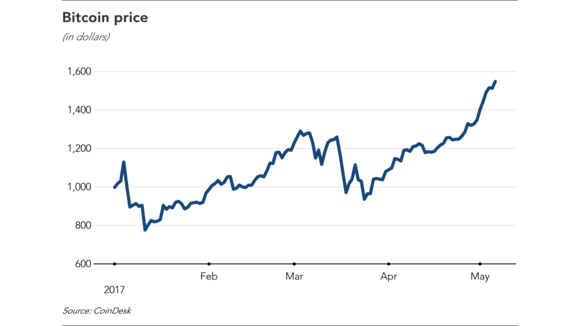 Until a few months ago, the most commonly traded currency for bitcoin was the yuan, as investors worried about a potential devaluation of the yuan bought the virtual currency. Now bitcoin trading is spreading to the rest of Asia.

According to CryptoCompare, another bitcoin information provider, on May 6 at 10 p.m. Japan time, the yen accounted for 39% of total bitcoin trading volume over the previous 24 hours. The dollar came next at 29%, and yuan came third at 20%. The South Korean won was the fifth, at 5%, behind the euro, at 6%. This suggests the majority of bitcoin investors are in Asia.

In Taiwan, bitcoin has become an alternative method of payment in response to tighter capital controls aimed at combating money laundering.

In Japan, the government began treating bitcoin and other virtual currencies as a payment method in April. Cyptrocurrency exchanges are now required to register with the government. In addition, starting in July, purchases of virtual currency will be exempt from the consumption tax.

In response to these changes, "institutional investors are starting to consider bitcoin as an investment target," said Yuzo Kano, CEO of bitFlyer, a big Japanese bitcoin exchange operator.

Data show virtual currencies are also spreading in South Korea. According to CryptoCompare, The won is the most frequently traded Asian currency for Ethereum, the second-largest virtual currency by market value.

At present there are some 16.3 million bitcoins in circulation. At a price of around $1,550 per bitcoin on May 6, their total market value is about $25 billion.