HANOI -- "Our persistency has been rewarded," Nazir Razak, chairman of CIMB Group Holdings, told guests at the launching of its latest subsidiary in the Vietnamese capital on Friday. 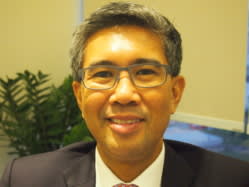 The group was granted a full-fledged banking license to operate CIMB Vietnam by the State Bank of Vietnam in August 2015 -- eight years after it first applied.

Vietnam had always been on CIMB's radar due to its growth potential, Zafrul Aziz, the group's chief executive told the Nikkei Asian Review.

"CIMB Vietnam gives us the opportunity to complete the footprint that we need to complete in Southeast Asia, especially when we know it is a market that is going to have the strongest growth going forward," he said.

"Of the over 92 million in population, 40% are below the age of 25. If you look at the banking sector, only one third has banking accounts," he justified. PublicInvest Research maintained its "neutral" rating on CIMB in a Wednesday note with a price target of 5.25 ringgit, citing lack of near-term catalysts and challenging market conditions.

The latest foothold in Hanoi marks CIMB's physical presence in nine of the 10-member Association of Southeast Asian Nations (ASEAN). Zafrul says CIMB knew it "just has to be here" in Vietnam but its license application was deterred by the global financial crisis in 2008 originated from the sharp increase in oil prices and subprime lending in the U.S. Other domestic rivals made their way into Vietnam years ahead of CIMB in the 1990s under former Prime Minister Mahathir Mohamad's "prosper thy neighbor" foreign policy to build trade relations. Following the end of the Vietnam War in 1975, Malaysia's relationship with the impoverished one-party socialist country was once strained by the influx of Vietnamese refugees into Malaysia. But in 1991 Mahathir leveraged state-owned Petroliam Nasional to venture into Vietnam. It was followed by lenders such as Public Bank, Malayan Banking and Hong Leong Bank under Hong Leong Financial Group. Of the seven fully-owned foreign banks in Vietnam, three are Malaysian entities.

At the time, CIMB was just an upstart known as Commerce International Merchant Bankers. It was not until late 1990s when CIMB started its aggressive expansion in the region. Nazir took the helm of the group in 1999 at the age of 33 and was the initiative​'s​ chief architect​. The bank's current tagline is 'ASEAN For You'.

Nazir pushed through mergers and acquisitions in the mid-2000s that gave CIMB a strong base now with listed entities in Malaysia, Indonesia, and Thailand, and an established corporate banking outfit in Singapore. CIMB has risen as one of the major regional players,​ boasting the sector's ​second largest asset portfolio​ at home and the ​fifth largest​in Southeast Asia.

CIMB claims to operate the largest branch network in ASEAN -- nearly 1,000 locations in all. In the first 9 months of this year, while making 75% pre-tax profit in Malaysia, 25% came from neighboring countries and others. Indonesia contributed 15% of profits before tax, followed by Singapore's 5% and Thailand's 4%. The contribution from neighbors once reached nearly 40% a few years ago but has declined due to economic downtrends in the region. Meanwhile, DBS Group Holdings, the largest bank in Singapore generated 3% of net profit in the same period from South and Southeast Asia, excluding the city-state where it made 77% of the total figure. With a solid base in Hong Kong, it secured 19% in Greater China and Hong Kong. As a late-comer in Vietnam, CIMB is banking on a leapfrog strategy to build its local market share in the hope of further expanding its ASEAN presence. According to Zafrul, Vietnam will be a "test case" for future rollouts of digital services elsewhere in the region.

To push its digital-focused growth model, CIMB will introduce banking products in Vietnam -- from savings accounts to payment services -- accessible from mobile phones. It will also be looking for partnerships with telecommunications providers and shopping malls to tap their customer databases.

The Malaysian lender is already offering competitive digital services elsewhere in the region, Zafrul said. "In Indonesia and Malaysia, we have launched 'digital enablement.' You can open an account in a minute without papers."

As a regional player, the bank is confident that it better understands regional customers' preferences. "The digital side is where we go mass through mobile online. No one goes to the PC anymore. The trick here is to ensure the system is stable, and customer experience is important," Zafrul said. "We have to predict what the customers want in terms of banking," Zafrul said, adding that about 95% of the group's products were already being sold outside of branches.

The Vietnamese venture comes after slowed growth in CIMB's key markets of Malaysia, Indonesia, Thailand and Singapore. Impacted by a slowdown in the Chinese economy and the commodity sector downturn that began two years ago, Zafrul said the group's loan growth is expected to fall by half this year from the 12% posted in 2015.

Since February 2015, CIMB, which is 46.6% owned by state investment funds, has been implementing an internal reform known as Target 2018 to weather these headwinds. By the end of that year, it is pushing for a 15% return-on-equity, cost-to-income ratio below 50% and 60% of revenue to derive from consumer banking.

To that end, it has embarked on a far-ranging internal restructure, reducing total group workforce by 11% after downsizing 3,599 people in Malaysia and Indonesia, shrinking its investment banking unit and exiting the Australian market. Zafrul said CIMB is on track with a cost-to-income ratio reduced to around 53% this year compared to 59% two years ago.

"We look the commercial side, since we are present in so many countries, there are flows within ASEAN. In Vietnam, there are many Thai and Indonesian companies. What we offer is a presence in both countries. There is no Indonesian bank in Vietnam," Zafrul said.

"We may not have the edge in the Vietnamese market with the Vietnamese banks, but we can support existing ASEAN clients to come to Vietnam. Over the longer term, we plan to support Vietnamese companies that want to go out, rather than compete head on with the local banks," he said.

The launch of ASEAN Economic Community last year provides further impetus.The group is in the process of applying for a banking license in the Philippines, the only ASEAN market it has yet to build a presence.

"CIMB is excited to invite you to plug and play our network, not just for banking but also to access opportunities for investments, partnerships or information from across this great region that we all call home," he said.

Yet the headwinds from a slowing Chinese economy, commodity prices rout and lingering rate hikes in the U.S. appear to be around for some time. Fitch Ratings said in a sector outlook report on Thursday that pressure on asset quality and profitability of Malaysian banks will persist into 2017. The rating agency also noted that gross impaired loans for the six largest bank groups in the country have increased from 1.76% at end-2015 to 1.93% at end-September.

Having set the digital banking strategy as the new mainsail to pursue its regional expansion, Zafrul said the "only challenging part" going forward is to draw in earnings amid the headwinds, as going digital would require significant investment. He added that CIMB just has to be realistic and "a lot of recalibrations" are going on to meet those targets.