A view of an empty road near the Independence monument in Phnom Penh on Friday, during a 14-day citywide lockdown.   © Reuters
SHAUN TURTON and BOPHA PHORN, Contributing WritersApril 19, 2021 18:02 JST | Cambodia
CopyCopied

PHNOM PENH -- Festivities for the Khmer New Year have been subdued this year as Cambodia locked down its capital. While families are missing out on the celebrations, economic pain and uncertainty are a bigger concern for many.

"When Covid first hit, I lost maybe 70% of my income," So Saroeun, who sells clothes in a Phnom Penh market, told Nikkei Asia. "This time, I'm finished."

As much of the world shut down in 2020, Cambodia was an exception, recording less than 500 coronavirus cases and no COVID-linked deaths in the first year of the pandemic.

Spared an outbreak, the small country retained some degree of business-as-usual, although the absence of foreign tourists and a global slowdown hit many businesses in the country.

Advisors for Prime Minister Hun Sen even commissioned a book to praise what they saw as their boss's success at containing the coronavirus, calling the longtime leader a "dashing hero who went against the current to fight COVID-19."

But while some countries discuss resuming international tourism within travel bubbles, Cambodia's luck appears to have run out.

Starting in February, a coronavirus outbreak has led to almost 6,000 cases in eight weeks, with a new daily record of 618 new infections set on Sunday. The surge, linked to 45 deaths, has snuffed out hope for many businesses that were already holding on by their fingernails.

The economic fallout can be seen on Phnom Penh's riverside. Previously a busy promenade fronted by hotels, restaurants and cafes, the area in recent months has seen an increasing number of businesses close down.

"99% of our customers were foreigners. There's no way I can make any money," Chandara said. "I don't think I'll be able to open another restaurant for at least two years." 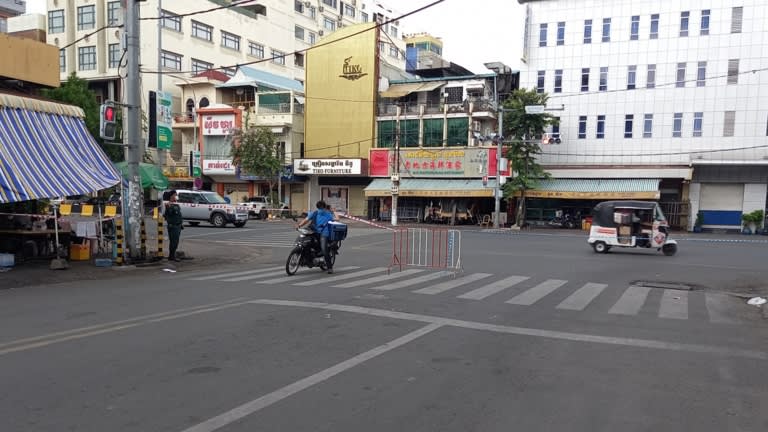 A delivery driver passes a police checkpoint in Phnom Penh. Amid confusion over the lockdown rules, a city official was forced to clarify that delivery drivers are permited to travel through the city. (Photo by Shaun Turton)

In the short term, most businesses must contend with a raft of government restrictions designed to curb the spread.

Last week, authorities locked down Phnom Penh and a nearby district for two weeks. The order says businesses deemed non-essential must shut. Residents, meanwhile, are banned from leaving their homes, with exceptions such as buying food and receiving health care.

Hun Sen called for calm after rumors of the impending lockdown sparked a wave of panic buying but conceded the situation was grave.

"We are on the brink of death already," he said. "If we don't join hands together, we will go to real death."

The lockdown's implementation, however, has quickly faced problems. Further revisions were added over the weekend deepening widespread confusion about the rules. Hun Sen, meanwhile, called for the deployment of military units, complaining corrupt police officers were undermining the efforts.

As cases climb, Cambodia is rushing to ramp up its vaccine rollout using the Sinovac and Sinopharm shots from China and doses of the AstraZeneca vaccine supplied by the United Nations-backed COVAX program.

It has administered at least one shot to 1.2 million people. The Economist Intelligence Unit, however, does not expect the country to reach herd immunity -- at least 60% of the population -- before 2025.

The outbreak has thrown into doubt promising growth predictions for the year for the developing economy, which shrank 3.5% in 2020, according to the International Monetary Fund.

Economist Intelligence Unit analyst Imogen Page-Jarrett said the group planned to revise down its real gross domestic product growth forecast for 2021 from 4.6% to between 3% and 4%.

Page-Jarrett said it was likely the government would extend lockdown measures further into the second quarter, as the seven-day moving average of new cases continued to trend upward.

"The outbreak and ensuing lockdowns will weigh upon consumer and business sentiment, suppressing private consumption (which accounts for around 70% of GDP) and fixed asset investment," she said via email.

"Households and firms will delay unnecessary purchases and investments, limiting spending to essentials. The lockdowns will also negatively affect disposable income and employment."

One bright spot could be Cambodia's exports. Despite the pandemic, Cambodia's exports grew 17% to $17 billion in 2020, according to Ministry of Commerce figures cited by local media. The rise was helped by a boost in machinery and electrical equipment exports, which increased by 30%.

Exports of garments, footwear and travel goods, actually slumped around 10% each, but remained Cambodia's most important commodity, accounting for $9.5 billion of shipments overseas.

Looking ahead, Page-Jarrett said the apparel sector was likely to get a boost from stimulus spending by the U.S. government, and electronic parts should also experience increased demand. However, Cambodia's export industry is vulnerable to virus disruptions. As well as the impact of lockdowns, COVID-19 cases have been detected at 36 garment factories, with almost 800 employees infected.

Labor rights advocate Kun Tharo said that while the factories whose workers have Covid infections only represented a small amount of production, the impact on workers' lives was immense.

"It requires urgent government intervention to ensure their daily and basic needs like food security," he said. The government in March extended a monthly $40 stipend to furloughed garment and tourism workers until at least June. It is also continuing to offer tax holidays to businesses in struggling sectors.

As of late March, it had also disbursed $291 million to almost 700,000 poor families via monthly payments. Authorities also say they will give some cash support to people caught in lockdowns, and waive utility bills for two months.

Overall, the government says it put aside between $800 million and $2 billion to help the economy weather the crisis. Much of the stimulus package, however, is not actual expenditure but expected reductions of state revenue because of tax breaks, delayed tax payments and other similar measures.

Debt remains a major burden for many in Cambodia. The country of 15.5 million has the largest average microloan size in the world at $4250, which is more than 95% of annual incomes.

In line with authorities' advice to help struggling borrowers, associations representing banks and microfinance institutions in Cambodia say their lenders have helped 340,000 people restructure loans valued at $4 billion in total. They also recently announced that people that test positive for COVID-19 would have principal and interest payments temporarily waived.

This, they said, would allow borrowers to stay safe at home during the outbreak without needing to fear losing their land or homes if they cannot repay their debt.

It's something So Saroeun, the clothing trader, would appreciate.

The 34-year-old says that, until the lockdown, she had no choice but to continue selling in crowded markets to feed her family and repay a loan. "I'm scared, but I have to make money," she said.