Cambodia's rail back on track after four decades of woe After a number of delays, Royal Railway has announced that work on Cambodia's northern line would be finished by July. (Photo by Masayori Ishikawa)
GEORGE STYLLIS, Contributing writerJune 4, 2018 13:30 JST | China
CopyCopied

POIPET, Cambodia -- Cambodia's railways are set for a historic revival next month when a single track stretching from Poipet, near Thailand, to Phnom Penh is complete, effectively connecting the country from north to south by rail for the first time in 45 years.

The completion of the northern line will close the chapter on years of delays and controversy, and marks a significant leap in economic progress since the country's infrastructure was decimated by years of war.

But with the potential involvement of Chinese companies in expanding the service, heralding a new golden age of train travel, concerns have arisen that Cambodia may end up sinking deeper into debt.

The railway has been built in stages, starting in Poipet, in the northwest, and progressing southwards.

In April 48km of missing track from Poipet to Serey Sisophon was rebuilt, and the 388km northern line is set to be completed in early July. The missing section was ripped up and sold off by the Khmer Rouge in the 1970s.

Riding the train on a hot day in May along the newly opened track connecting Poipet to Battambang province, a distance of almost 120km, passengers were excited in spite of an earlier one-hour delay at the platform.

Many were experiencing train travel for the first time, in air-conditioned carriages, along a route that was last in operation 45 years ago. 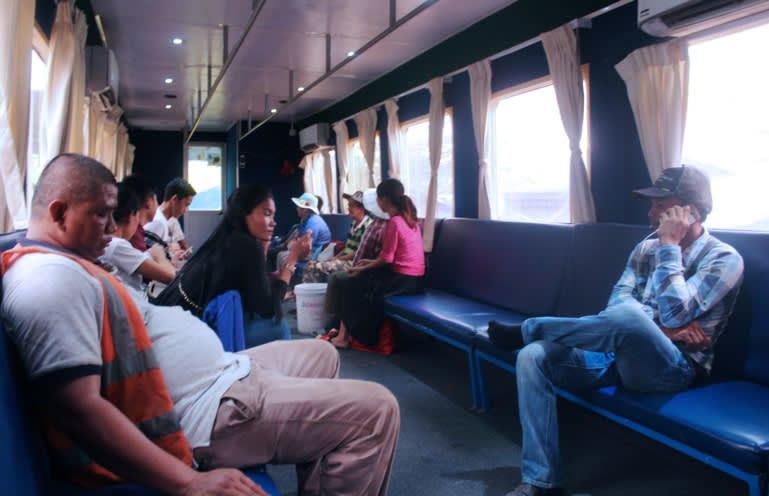 Passengers ride the train in May from Poipet city, neighboring Thailand, to Battambang, a route that had not functioned for 45 years. (Photo by George Styllis)

"The train is more safe than the car and cheaper," said Veng Keomyou, 21, a first-timer.

The advantage of safety was echoed by another passenger -- particularly pertinent given how many people die in road accidents every year in Cambodia.

Built by the French during colonial rule, the northern line was ravaged by war, as was the southern line, and both became symbols of neglect. Following a post-war revival, partial services -- made dangerous by bandit attacks -- ran in both directions, but by 2009 both lines were closed.

John Guiry, CEO of Royal Railway, the concessionaire of the railways and part of local conglomerate the Royal Group, told the Nikkei Asian Review the northern line would be finished in early July.

The rapid restoration of the tracks comes amid renewed determination between Royal Group owner Kith Meng and Transport Minister Sun Chanthol to finish the project.

"They basically agreed, let's get it finished and let's get it done. It's been going on for a numbers of years, costing the government and the people of Cambodia a lot of money," said Guiry.

A plan to modernize the train system was started by the government and the Asian Development Bank in 2006.

The goal was to rebuild and rehabilitate 600km of existing track, including the 48km section to Thailand.

The 267km southern line from Phnom Penh to the coastal town of Sihanoukville began commercial rail services in 2010, and started taking passengers in 2016.

The northern line proved more problematic. The project was beset by delays and controversy.

One reason was problems with the original resettlement plans, which an independent review panel found in 2014 were riddled with "major design flaws." These included a lack of consultation which caused thousands of families to lose their land and livelihoods.

Also in 2014, Toll Group, the Australian logistics company that was jointly involved in the railway project with Royal Group, sold its entire 55% stake to its partner, citing setbacks, delays and a lack of revenue.

"The money had somehow gone somewhere. We never tracked it."

Seemingly weary of the problems, the ADB stopped funding the project in 2015. Hoeurn Somnieng, deputy director of the cabinet at the transport ministry, said the government had been self-funding the railway ever since.

Its brisk revival follows a wave of investment by Chinese companies in Cambodia and Southeast Asia, as part of Beijing's Belt and Road initiative.

Guiry said such expansion would require a "massive amount of investment," with the companies still in the feasibility-study phase.

"If they come in and fund the upgrades and they do a whole bunch of different things and they bring in different styles of trains sets to the ones we've got then hopefully we'll be partners," said Guiry.

Senior minister Somnieng said of the plans: "Nothing is clear yet."

When asked whether a loan from China might help finance the project's future, given Cambodia's slim resources, Somnieng said this was "not yet on [the] agenda".

But experts cautioned against an overreliance on China. From Kenya to the Philippines, China's big-ticket building ventures have faced criticism for their potential to sink countries into serious debt, and for hiring Chinese rather than local laborers.

"In other countries where China has built railways, it provided a loan upfront and provided all the materials and the labor for building the railway," said Brahma Chellaney, a China analyst at New Delhi's Centre for Policy Research.

"I would be very surprised if it was [a different arrangement] in Cambodia," he said, adding that China's loans come with "quite stiff" terms.

"If one is to believe the debt owed to China by Cambodia, it is now at circa $4 billion, which means 20% of Cambodia's GDP."

As Cambodia rushes to compete with its more developed neighbors in a sustainable way, the country will have to consider carefully how much to rely on China. No doubt many will welcome Chinese technical expertise and equipment.

But back on the train, Chorn Komsot, 51, who had been a snack-seller on the trains in his teens, was happy as he sailed past lush rice fields and recollected his youth.

He did not care if it was Chinese or Cambodians who ran the trains. He was just glad to be sitting and watching the world go by again.