Travelers from region making up for dwindling Chinese tourists Tourists from Indonesia take pictures beneath the cherry blossoms in Ueno Park in Tokyo. (Photo by Tomoki Mera)

Southeast Asian tourists seem to come to Japan in spring, when cherry blossoms are in bloom. Visitors from Indonesia and the Philippines were up 40% to 60% on the year in January and February.

In late March, a travel fair held by a joint venture between Japanese travel agency JTB and Indonesia's Panorama group in Jakarta attracted many Indonesians who were thinking of visiting Japan. The tour that garnered the most attention was a six-day cherry blossom tour of Hokkaido in May, which costs about 23 million rupiah ($1,732). The tour aims to shorten travel time by flying the customers directly to Hokkaido on a Garuda Indonesia charter plane so that the travelers can fully enjoy themselves with a minimum of complications.

At this time of year, cherry blossom season in Japan, many Indonesians line up for Japanese visas at the Japanese embassy in Jakarta. An official at the embassy said visa applications are up 40% from a year earlier. The embassy has increased the number of visa application windows since early March, and they now handle as many as 1,800 applications a day.

The Japanese public and private sectors are joining forces to attract travel demand. In Vietnam, the Japan National Tourism Organization opened an office in Hanoi, and the Japan Tourism Agency, JNTO and the Vietnam National Administration of Tourism signed memorandums on tourism exchange, among other things. Budget airline Jetstar Japan last year launched a direct flight between Narita Airport, near Tokyo, and Manila. 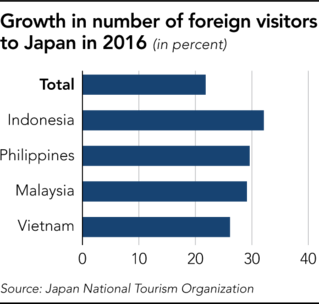 The increase in Thai visitors to Japan in 2016 was modest, at about 13%, compared with other nationalities, but they totaled more than 900,000 in 2016, the largest among the six major countries of Southeast Asia. The uptrend began around 2012 and the number is set to top the 1 million mark this year.

The tourism industry is keen to tap Thais' interest in cherry blossoms, which are still at their peak in the northern parts of the country such as Tohoku. Thai Airways International launched chartered flights to Iwate Prefecture in the region in mid-April.