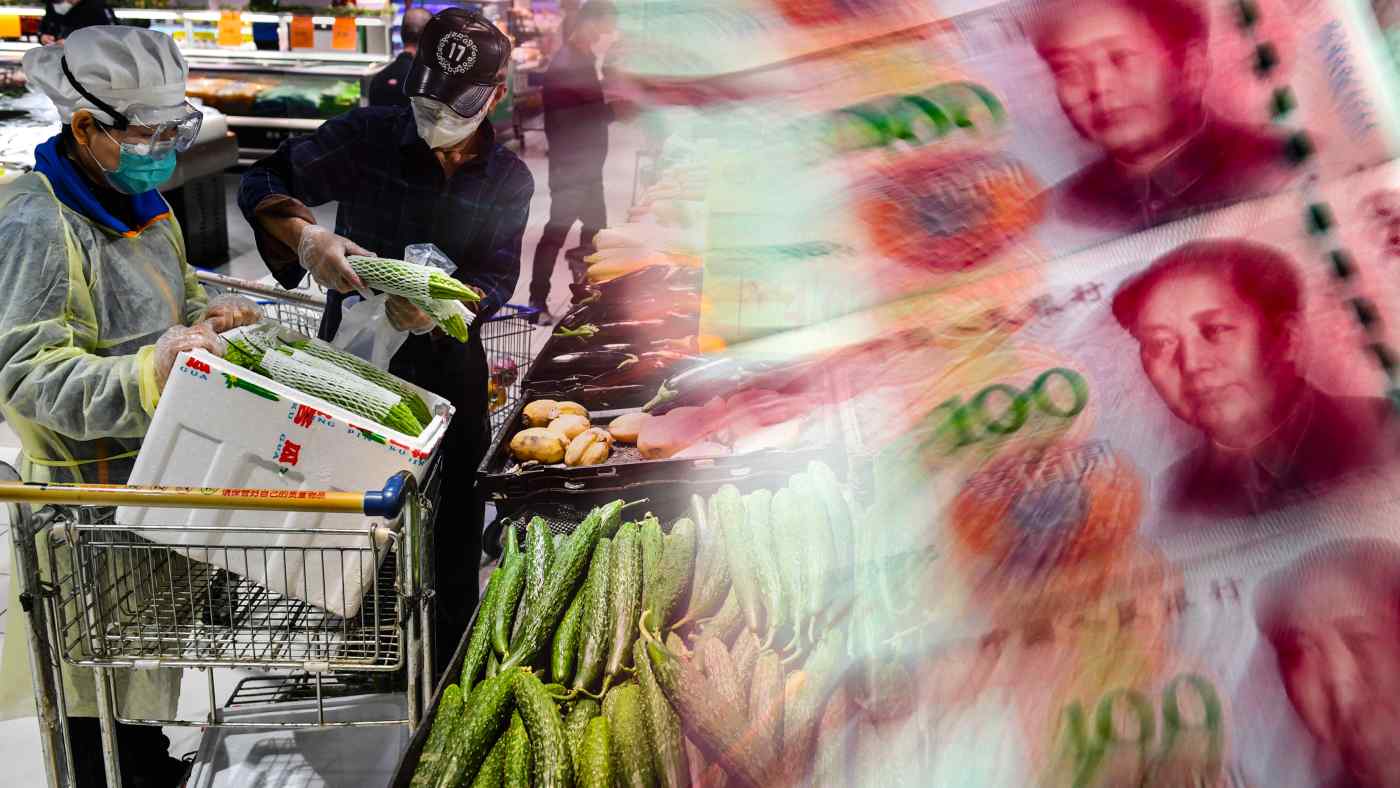 HONG KONG -- China's economy likely contracted by 3.7% in January-March quarter and will slow to 3.3% growth for all of 2020 as the coronavirus pandemic takes its toll, according to the consensus forecast of economists survey by Nikkei and Nikkei Quick News.

The average forecast of 29 economists would mark the first time China's economy has shrunk since at least 1992.

Chinese industrial output and consumer spending is just beginning to recover from the outbreak, which began in Wuhan late last year and has now infected more than 640,000 people. How quickly growth rebounds is crucial for President Xi Jinping, who needs a 5.6% expansion this year to achieve the Communist Party's goal of doubling gross domestic product by 2020 compared with 2010.

"Consumer demand will have a difficult time fully recovering before the epidemic is completely over," said Xie Yaxuan, chief economist at China Merchants Securities.

"We expect the Chinese economy to be in recession through the first half of the year," added Xie, who projected a 3% decline in real GDP for the January-March quarter.

Aidan Yao, senior emerging Asia economist at AXA Investment Managers, pointed to "slow work resumption since February" in his estimate of a 7.5% contraction in the first quarter. Others estimates were even steeper, with Barclays projecting negative 15% growth and Goldman Sachs forecasting negative 9%. Asked when they expect Chinese economic activity to return to normal, 65% of respondents said the April-June quarter while 35% said July-September.

Chinese authorities have urged domestic factories to restart production. But "as the COVID-19 epidemic becomes a global event, external demand will be hit hard and exports will be weaker," said Liao Qun, chief economist at China CITIC Bank International, referring to the disease caused by the new coronavirus.

After the severe acute respiratory syndrome, or SARS, outbreak subsided in 2003, demand sprung back quickly and China's full-year GDP growth reached 10%. Now, however, services make up a bigger share of the economy than before, making such a V-shaped recovery unlikely in the view of many economists.

"With support from policy easing, we expect the rebound in China to become more pronounced in the second half of the year, ahead of Europe and the United States, led by stabilizing consumption demand," said Sophie Altermatt, economist at Julius Baer. "However, the recovery will not be able to make up for the huge loss incurred in the first quarter."

China is unlikely to achieve the GDP-doubling goal in 2020, said 13 out of 16 economists who answered this question. Ken Chen, China economy analyst at KGI Asia, said he expected the country's next five-year plan to target not the size of the economy but goals in terms of "per capita income, social education, per capita medical resources, patented inventions, and so on."

Asked about the prospect of fiscal stimulus, Mizuho Bank's China research chief Mihoko Hosokawa said such pump-priming would have "major side effects" for local government debt and industrial overcapacity.

Francoise Huang, senior Asia-Pacific economist at Euler Hermes, expects a fiscal support package amounting to 4.4% of GDP in 2020, but added: "We think the priority of Chinese policymakers is to help soften the economic blow of the epidemic and not to engineer a rebound, as they're still concerned with controlling the debt bubble."