China GDP expands 2.3% in 2020 with fast recovery from COVID SHANGHAI -- China's gross domestic product in 2020 grew on the tail wind of investment and consumption, backed by a relatively rapid recovery from the COVID-19 pandemic that also fueled exports.

Full-year growth came in at 2.3% year on year in real terms excluding price fluctuations, the National Bureau of Statistics said on Monday, higher than the median 2.1% projected by 35 economists polled by Nikkei.

The growth, the lowest in the 44 years since the Cultural Revolution devastated the economy in 1976, was lower than the 6% achieved in 2019.

However, growth in the final quarter improved to 6.5%, riding the momentum of the 4.9% expansion achieved in the third quarter and the 3.2% growth seen in the second quarter.

Although there were some weak spots, such as delayed improvement in incomes, the growth rate returned to the pre-coronavirus level in the fourth quarter of 2020.

Real GDP in 2020 grew to 1.94 times the size of the economy in 2010 but fell short of the Chinese Communist Party's target of doubling the size.

China is likely to be the only major economy to expand as countries including the U.S. and Japan continue to struggle with the pandemic. However, the expansion was achieved on the back of a downward adjustment made last month to the 2019 numbers, providing a lower base from which to report growth for 2020. 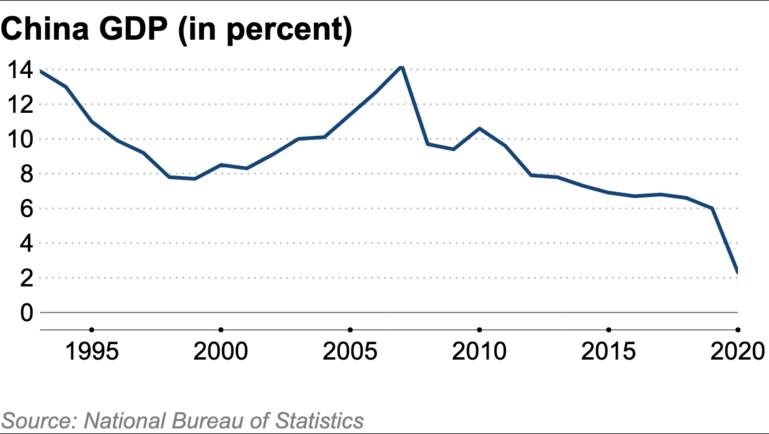 "Macroeconomic and financial policies have supported the recovery," the International Monetary Fund pointed out earlier this month in a statement.

Real estate development grew 7%, and along with high-tech industries such as pharmaceuticals drove investment in fixed assets up by 2.9%.

Retail sales of consumer goods, however, declined by 3.9% as lockdowns and other pandemic control measures put a dent on spending behavior. The decline was mitigated by 15% growth in online retail sales, which accounted for one-quarter of total retail sales, compared to 4% in 2019.

At constant prices, China's GDP crossed a new high of 101.6 trillion yuan ($15.6 trillion), reflecting the nation's overall strength in economic, science and technology development, National Bureau of Statistics spokesman Ning Jizhe told reporters. "At the same time, we should also be soberly aware that China is still the world's largest developing country, and its per capita GDP is still slightly lower than the world average," said Ning, adding that the country needs to make relentless efforts to meet long-term goals.

China's early recovery from the pandemic and subsequent work resumption had allowed for industrial production to ramp up, contributing to demand for its factory goods, including medical equipment and electronics.

The Chinese economy is expected to grow 7.9% in 2021 as economic activity continues to normalize and domestic outbreaks remain under control, the IMF said on Jan. 8.

DHgate, a Beijing-based e-commerce platform, saw demand for battery-powered bikes made in China grow by 210% annually as European countries such as the U.K., France and Italy promoted the use of private transport during the pandemic.

"Cross-border e-commerce will play a more important role in 2021 as it has emerged as a key channel to mitigate the impact of conventional trade amid the pandemic," Diane Wang, DHgate founder and chairwoman, told Nikkei Asia.

China's robust export growth had reduced the need for larger stimulus measures in 2020, Nomura wrote in a Jan. 14 report. The research firm expects Beijing to normalize its monetary policy stance in 2021.

The average unemployment rate in urban areas remained stable at 5.6%, lower than expected and reflecting a recovery to the pre-COVID-19 level. China's growth momentum will continue, said Yue Su, principal economist at the Economist Intelligence Unit, though the current COVID-19 outbreak in parts of the country might cause temporary fluctuations. "Challenging aspects include the disproportional impact to small companies during the exiting [of the] easing [of] monetary policy," warned Su. "If not handled properly by the authorities, bad-debt issues could add pressures to regional banks at local level."