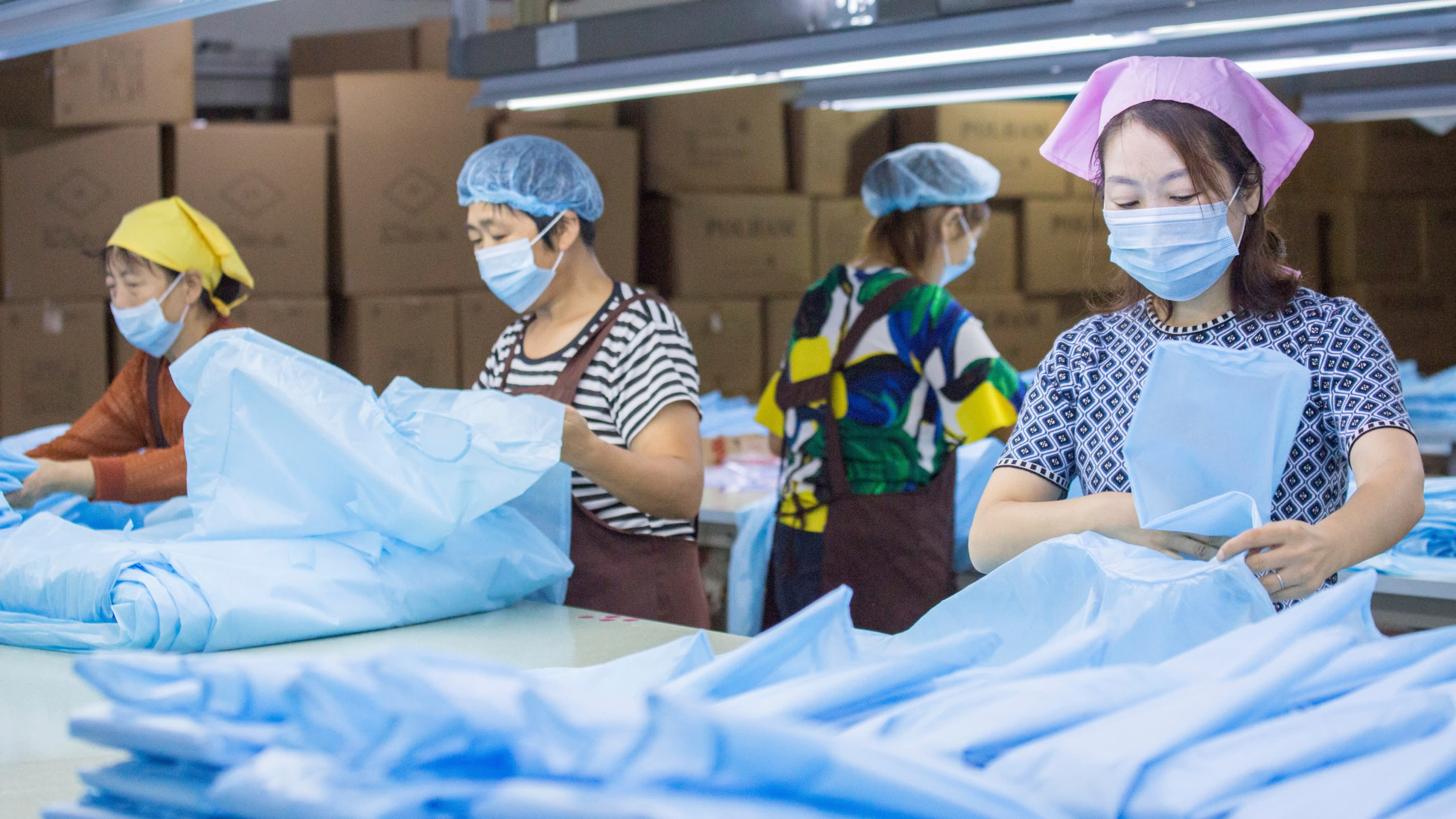 SHANGHAI -- China's gross domestic product growth further improved in the July-September quarter on rising consumption and external demand, reflecting the efficacy of its fiscal stimulus to overcome the impact of the coronavirus pandemic.

Growth during the third quarter improved to 4.9% year-on-year, the National Bureau of Statistics said on Monday. That was lower than the median 5.2% forecast by economists polled by Nikkei. It beat the second quarter's 3.2%, which reversed the sharp contraction of 6.8% during the first quarter.

The government is confident of a sustained recovery in the final quarter even as growth in the first nine months improved marginally by 0.7%. "China has the foundation and condition to maintain the current growth trend," an NBS spokesperson said.

Under a proactive fiscal policy to stimulate the economy, total local government bond issuance reached 5.68 trillion yuan ($847 billion) in the first nine months, according to the Ministry of Finance. The figure includes 91% of the special bond quota of 4.73 trillion yuan announced in May to stimulate spending, focusing less on households than infrastructure.

The third quarter's growth was backed by industrial and agricultural outputs, which increased by 5.8% and 3.8%.

Production of construction equipment -- which includes trucks, excavators and shoveling machinery -- as well as industrial robots and integrated circuits helped to sustain growth.

Investment in fixed assets rose 0.8% in the first three quarters, underpinned by real estate development and high-tech manufacturing in sectors that include pharmaceutical, computer and office devices.

Total retail sales grew 0.9%, recovering from contraction in the previous two quarters due to spending on telecommunication devices and recreation. Even so, the sector contracted by 7.2% in the first nine months, mirroring subdued spending, especially for nonessential goods and catering.

"We still need to see evidence of a firmer recovery in domestic consumption to assuage concerns of worsening industrial overcapacity from over the past few quarters," said Nick Marro, an analyst at the Economist Intelligence Unit.

During the quarter, trade in dollar terms improved from the previous quarter as trading partners emerged from the pandemic, with exports rising 8.8% to $712 billion -- the highest this year. Imports grew 3.2% to $554 billion, resulting in a surplus of $167 billion, the highest since the last quarter of 2015 despite the trade war.

"Consumption for Chinese products remains strong despite the pandemic," said Sorakhata Tirera, general manager of Crestone. The trading company in the eastern city Yiwu, which is known for its wholesale market, ships household products and building materials mainly to countries in West Africa.

Sales grew 26% for the past three quarters compared to the same period last year, said the Senegalese trader, adding that orders were made through correspondence due to trust. Crestone has been around for 16 years.

For the first nine months, foreign direct investment in dollar terms, excluding the financial sector, grew 2.5% to $103.26 billion, led by Hong Kong, Singapore, the U.K. and the Netherlands. The investment was largely dominated by service sectors that included e-commerce and research and development.

Despite the overall growth, the government warned that a resurgence of the epidemic at home remains a threat to the country's recovery. "Solid efforts" to stabilize employment, finance, foreign and domestic investment are among the areas of focus, the NBS said.

"We expect China's growth in the second half to improve compared with the first half of the year due to robust policy support for infrastructure and heavy industry," according to Yu Kaho, Singapore-based analyst at risk advisory firm Verisk Maplecroft. "However, it will be difficult for the rebound to offset China's structural slowdown amid weak global demand and geopolitical tension."

The International Monetary Fund said on Oct. 14 that China would be the only major economy to grow in 2020. It projected growth of 1.9% for the country, against a 4.4% contraction for the global economy.