China and India infrastructure construction paves way out of crisis SINGAPORE -- China and India are set to lead Asia's construction sector out of its coronavirus slump, analysts say, as the two governments look to power infrastructure growth -- and their economies -- in the years ahead.

Advisory firm Oxford Economics expects China will see annual construction output contract 8% this year but surge to 14.5% in 2021. For India, output is expected to shrink 5.4% this year, with a rebound to 7.7% in 2021.

Oxford says activity should be back to pre-COVID levels by the first quarter of next year in China, and the second in India. China is set to remain the largest single construction market throughout the next decade, exceeding global average growth rates to reach nearly $1.4 trillion by 2030.

"A surge in infrastructure spending to support the post-pandemic recovery underpins the positive outlook for construction in China," Priyanka Kishore, head of India and Southeast Asia economics at Oxford, told Nikkei Asia. "Beijing is focusing on large infrastructure investment projects and supply chains to propel the economy forward," she said.

Oxford notes that China's public safety nets have also been made more generous to encourage households to spend more of their savings. It says this, coupled with rising wages, will spur demand for a range of services such as entertainment and education, in turn creating demand for facility construction.

Kishore added that the sector is likely to be a key catalyst for China's overall economic comeback. "Pent-up construction demand, alongside support from public [infrastructure] spending, is expected to engineer a V-shaped recovery." 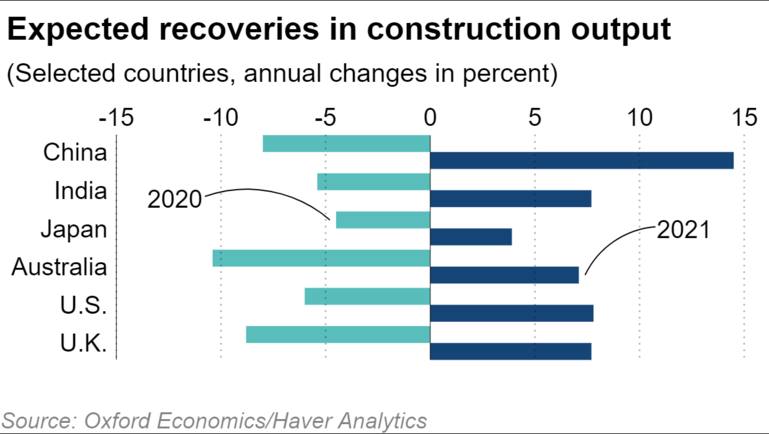 Like Oxford, analytics company GlobalData predicts a construction resurgence in India next year as well, despite what it calls an unprecedented contraction of 50.3% in real terms in the second quarter of 2020.

"The industry is expected to remain subdued for the remaining part of the year as the COVID-19 situation continues to worsen across most of the country, thereby adversely affecting the industry from both the supply and demand side," said Dhananjay Sharma, construction analyst at GlobalData.

India is among the countries hit hardest by the pandemic, logging over 7 million coronavirus cases. But GlobalData expects construction will be driven by investments in an ambitious national infrastructure initiative, a new affordable rental housing scheme and spending on manufacturing capacity under the government's push for a "self-reliant India."

With its large market and low-cost labor, India could also benefit from a global shift in supply chains away from China, according to GlobalData. Even amid the construction industry's bleak year, data centers are a bright spot as the pandemic makes Asian businesses and individuals more reliant on digital services.

Linesight, a construction consultancy headquartered in Ireland, says investment activity in these projects remains fairly solid. The total transaction volume in the Asia-Pacific region over the first eight months of 2020 reached $1.43 billion, about 56% of the 2019 level.

"The deployment of the high-speed 5G network -- including [in] China -- is expected to boost the data center market," said John Butler, managing director for the Asia-Pacific at Linesight.

"The growing importance of Internet of Things applications, the impending 5G network, and fast adoption rates of cloud computing as well as the post-COVID-19 new normal are the four major factors driving the surge in demand for cloud storage," he added.

Butler observed that in India, Bridge Data Centres has earmarked $400 million to $500 million for investments, and is in the advanced stages of acquisitions in other regional markets worth a further $220 million to $250 million.

In Singapore, the Building and Construction Authority estimates the overall construction sector will see a pullback of 10 billion Singapore dollars ($7.3 billion) this year, with projected demand falling to between SG$18 billion and SG$23 billion, down from SG$28 billion to SG$33 billion.

Even so, Linesight says data centers can provide a cushion, with the city-state poised to lead Southeast Asia in the field. This market in Singapore was heating up pre-COVID and the government is working with telecom providers to increase their capacity in anticipation of future requirements.

Butler also noted that just across Singapore's border with Malaysia, in the district of Johor, Microsoft is building a data center that is "40% complete," according to the state government.

In general, painful disruptions from the pandemic notwithstanding, the longer-term picture for construction still holds plenty of promise.

Oxford forecasts that even with the sharp downturn this year, worldwide construction activity is still expected to increase nearly 35% from 2019 to reach $5.8 trillion over the next decade -- with two-thirds of the growth anchored in China, the U.S., India and Indonesia. Workers are seen on a metro construction site in Mumbai on July 1, after some coronavirus restrictions were eased.   © Reuters

Linesight's Butler observed that "construction is expected to pick up as countries in Asia, the most prominent construction market, have started planning life after COVID-19."

"China has resumed construction on just under 90% of key projects, according to an official with the National Development and Reform Commission," he said. "All major railway projects have resumed operation, with 97% of major highway and waterway projects and 87% of airport projects also resuming construction."

Butler said that "on its face," this rush back to investment appears to be working, given China's 3.2% economic growth in the second quarter of 2020.

"Big investments," he said, "helped make China the first major [country] to see its economy rebound" after the outbreak.