NEW DELHI -- China and India are vying to invest in Bangladesh's stock exchange, a battle that has implications for the two regional powerhouses' rivalry in South Asia.

The Dhaka Stock Exchange plans to sell 25% of its shares. On one side is a consortium of the Shenzhen and Shanghai stock exchanges. Ranged against them is a consortium made up of India's National Stock Exchange, Nasdaq of the U.S. and others. The exchange will select one of the groups as its preferred bidder on Monday, at the earliest, and submit a report to the Bangladeshi Securities and Exchange Commission for approval of the sale.

The Chinese consortium has offered 22 taka (26 cents) a share, while the Indian-led bidder has offered 15 taka. Local media report the Chinese bidder has also offered technical assistance worth nearly $37 million, in addition to the share purchase valued at $120 million.

India's National Stock Exchange is a private-sector company, but it was set up by a group of big financial institutions at the behest of the government. Chinese exchanges, meanwhile, take their cue from Beijing. This adds to the impression that the battle for the stake in the Bangladeshi bourse is part of the larger rivalry between China and India.

The Indian side appears to be at a disadvantage, but National Stock Exchange CEO Vikram Limaye flew to Dhaka on Feb. 11 to lobby the Securities and Exchange Commission, according to sources. 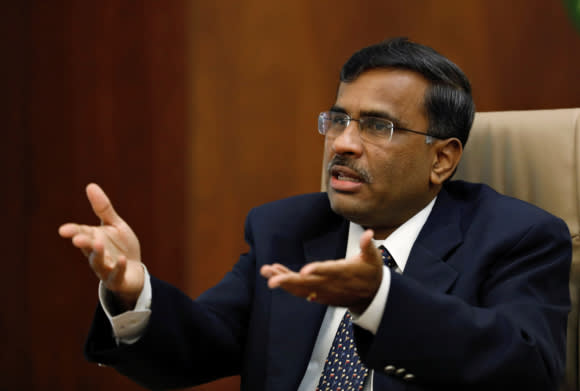 The Dhaka exchange has, up to now, been funded by small, local securities companies. Because the bourse is demutualizing itself, it is seeking a foreign strategic partner. It believes selling the one-fourth stake will help modernize the country's capital markets.

Beijing is trying to make the yuan a major international currency, asking its trading partners to use the Chinese currency to settle some transactions. If the Chinese consortium wins the bid for Dhaka exchange and sends directors to help run it, China may be able to list yuan-denominated financial products there in the future. For Chinese companies operating in Bangladesh, listing their shares on the exchange would allow them to finance their operations locally.

Another Chinese consortium that includes the Shenzhen and Shanghai exchanges bought a 40% stake in the Pakistan Stock Exchange, the country's only bourse, for nearly $90 million in January last year. Economic ties between the two countries are deepening, with many Chinese businesses operating in Pakistan, spurred by work on the China-Pakistan economic corridor. If these companies list their shares on the Pakistan Stock Exchange, China's influence will grow.

But India has trump cards of its own. Bangladesh shares more than 90% of its land border with India and leaders of the two countries have visited each other almost every year recently. A railway linking the eastern Indian city of Kolkata and the industrial city of Khulna in Bangladesh's southwest began operating last November. In addition to strengthening their economic ties, the neighbors have agreed to bolster their defense cooperation. Indian Prime Minister Narendra Modi maintains closer ties with Bangladesh than he does with other neighboring countries.

For China, relations with Bangladesh are fairly distant compared with the other countries in South Asia, but it is trying to change that. In 2016, Xi Jinping became the first Chinese president to visit the country, pledging loans worth $20 billion. That is 10 times more than Modi offered when he visited Dhaka the previous year.

Economic relations between China and Bangladesh are becoming closer. United Nations statistics show that China's exports to Bangladesh exceeded $14 billion in 2016, far outpacing India's exports of less than $6 billion. China supplies intermediate goods and machinery to Bangladesh, which is known as the "world's garment factory." India's exports had been rising until 2013, but have since lost steam. 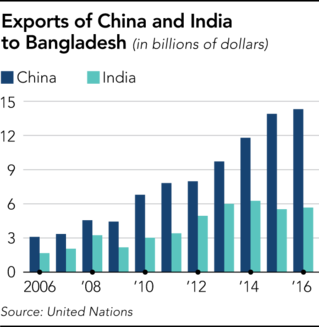 Despite this reversal of fortune, China's strategic projects in Bangladesh have not progressed as it hoped. Beijing wanted to build a deep-sea port at Sonadia, south of Chittagong, but the project was canceled in 2016, partly due to Indian objections. Another reason it was scrapped was that Dhaka reached a deal with Japan to build a different deep-water port.

China's Belt and Road Initiative is channeling investment and loans to infrastructure projects, with Chinese companies undertaking construction in Asia to solidify the country's economic dominance. The strategy has been somewhat successful in Pakistan, Sri Lanka and the Maldives. China has acquired the right to operate ports in Pakistan and Sri Lanka. But given India's influence, it has had to resort to other methods in Bangladesh. The bid for the stake in the Bangladeshi stock exchange appears to be Beijing's latest play for economic influence.