China attempts to fine-tune its control over coal and steel

BEIJING -- China is still struggling to find a happy medium between market forces and a planned economy, and nowhere is this more obvious than in the coal industry.

Convening a meeting of the standing committee of the State Council, China's cabinet, Premier Li Keqiang on May 10 urged those present to speed up efforts to cut excess production capacity. "The shakeout has been delayed for some production facilities due to changes in the supply-demand situation, but resolving excess production capacity is an important task in supply-side structural reform," he said. 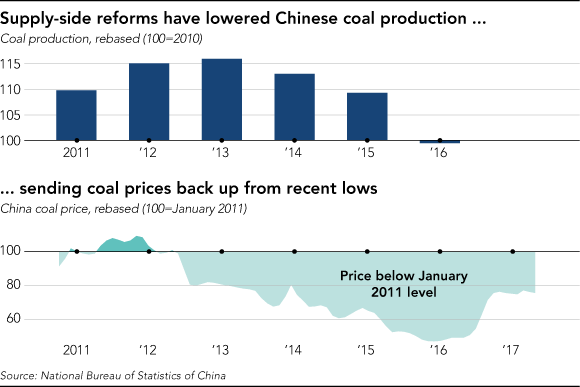 The government aims to cut total coal capacity by 150 million tons in 2017. At the committee meeting, it was reported that production capacity had already been cut by 68.97 million tons this year, achieving 46% of the annual target.

Others, however, suspect that Beijing's appetite for capacity cuts is waning. As Li himself pointed out, China shaved 290 million tons off its coal capacity last year, and prices are 40-50% higher than a year ago.

"The Chinese government's control on resources and commodities, including coal, has shifted to a system of making fine adjustments in response to market trends," said a senior government official in Shanxi Province, a major coal-producing region.

In the planned-economy era, the central government strictly controlled supply and demand. Market principles have been allowed to take over that function in recent years -- but only so long as things remain on an even keel. The National Development and Reform Commission, which has considerable authority to guide China's economic policy, stands ready to intervene the moment instability rears its head. Specifically, "the NDRC will come forward with instructions when there arise signs of inflation that affects social stability or when a supply shortage is likely to occur," said an executive of a major coal company in Shanxi.

Eager to impress Communist Party bigwigs ahead of the top leadership reshuffle in 2017, local governments chiefs scrambled to dispose of old production facilities last year and instructed coal producers to "strictly observe regulations" restricting operations to a maximum of 276 days a year. The result was a capacity reduction of 290 million tons, but the subsequent tightening in supply-demand conditions that fall caused prices to spike. Standard steam coal rose to 600 yuan ($87.04) per ton, up about 60% from the beginning of 2016.

The NDRC in September announced an easing of the 276-day operating limit. It also approved production increases for major coal producers that had long-term contracts with electric power companies and other users at prices 10% lower than market prices.

The NDRC continues to meticulously control output and prices by providing constant guidance to industry organizations and major companies.

Because China is the world's largest consumer of coal, Beijing can manage market trends, a senior government official said with confidence.

Not everyone agrees, however.

"Intervening in the transactions of individual companies is inefficient and is actually a way of giving state-owned companies favorable treatment," said an analyst at a foreign securities brokerage. "Setting only target prices and relying more on the market would improve efficiency."