An excavator demolishes a house in a hutong neighborhood near the Forbidden City in Beijing, China April 20, 2017.   © Reuters
Economy

China crackdown on pollution and housing to hit excavator sales

Chinese excavator dealers are braced for slower business as government anti-pollution measures combine with already slowing investment growth. Almost half of 33 dealerships interviewed by FT Confidential Research said they expected sales growth to flatten or drop in the coming six months, while just six said they expected sales to grow by more than 10 per cent.

This relatively downbeat outlook contrasts with a strong improvement in business this year. Since the start of 2017, excavator sales have been growing at an average annualized rate of 115.4 per cent, according to CEIC data. In our survey, 29 of the 33 dealers said sales in the most recent month were up on the same month last year, including 17 who estimated an increase of 50 per cent or more. A three-year slump ended at the start of 2016 thanks to government stimulus. Furthermore, overcapacity problems resulting from the government's Rmb4tn ($601bn) stimulus response to the global financial crisis have dissipated in the wake of a price-driven recovery in upstream industries (see chart). But dealers expressed concern that such good times will not last. Some of the drivers of this year's surge are slowing. Real estate activity is faltering on the back of tightened government policy, dealers said. Three of the five dealerships we interviewed in Sichuan province said orders from real estate clients were growing at single-digit rates rather than the double-digit pace recorded about six months ago. Remotely monitored data from Japanese equipment manufacturer Komatsu suggest that use of its machines in China is coming down after a strong increase in the spring (see chart). Pollution controls are also expected to play a part. Sales of medium-sized and large excavators in Sichuan have already been hurt following temporary mine closures by local environmental protection officials. The mines have up to six months to meet new emissions standards; dealers in the province expect annual sales growth to moderate to 20-30 per cent in response, down from as much as 100 per cent recently.

Liu Jian, owner of an excavator leasing company in the western city of Leshan, said the average monthly hours that machines are in use has fallen to less than 100 from about 140 in May. More than half of the projects he works with have suspended new orders as the government's toughened environmental stance affects local activity.

As well as adjusting to long-term regulations to clean up China's environment, vast swaths of industry in northern parts of the country will be under lockdown this winter to counter the seasonal increase in coal consumption. Up to 28 cities - accounting for 13.8 per cent of fixed asset investment in 2016 - may be affected by the measures, while some plants have already stopped production. Steel production in Tangshan, Hebei province, has been halved, while Tianjin intends to suspend urban construction work for five months starting this month. Demand for excavators will weaken as companies take to the sidelines until the suspension ends next year, dealers there said.

Demand is still being supported by the product life cycle of excavators. Those purchased in the sales boom during the global financial crisis are being replaced as they come to the end of their eight to 10-year service life. A dealer in Hohhot, capital of Inner Mongolia, said this was the reason for a sales increase that saw more excavators sold in the first half of this year than in the whole of 2016. Nationwide, replacing half the excavators sold in 2010 would result in annual sales this year greater than those of 2016 (see chart). 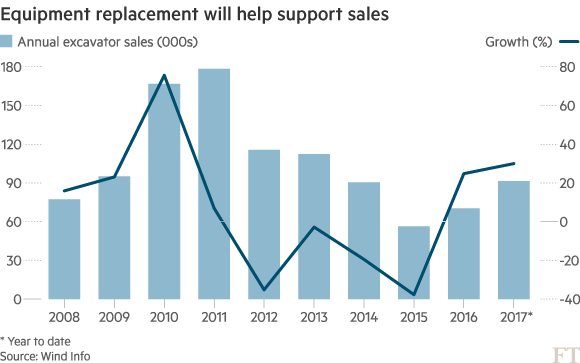 Although official data show infrastructure investment slowed in August, dealers believe demand from such projects will continue to support their business. Infrastructure was cited by 25 of the dealerships we surveyed as their strongest driver of demand, while 29 said local infrastructure construction was proceeding at a normal, if not accelerated, pace.

Although overall investment growth is slowing, activity remains relatively strong in key areas, such as road building (see chart). Dealers in inland provinces said government transport projects were lending support to excavator sales, such as in Chengdu, where an executive with a Hyundai dealership said sales had more than doubled this year on the back of the city's 13 ongoing subway projects. An official with Shangcheng Machinery, a dealership in Shanghai, said sales of large excavators rose over the summer, usually a quiet time, as highway construction in western provinces such as Guizhou accelerated.

Although sales have increased across the board, sales of larger excavators have outpaced those of smaller machines this year (see chart). Infrastructure will continue to play a crucial role in supporting Chinese economic growth, suggesting that larger excavators will remain the key driver of sales. Dealers worry, however, that this demand will not be enough to sustain what has been a rare bumper year.

This article was first published on October 9 by FT Confidential Research.