Employees work on a production line at a SAIC-GM-Wuling factory in the southern Chinese city of Liuzhou.   © Reuters
September 28, 2016 13:00 JST | China
CopyCopied

TOKYO -- China's growth will continue to slow in the years through 2030, while the "ASEAN-4" nations of Malaysia, Thailand, the Philippines and Indonesia, the four key Association of Southeast Asian Nations members, will collectively hold relatively steady, according to the Japan Center for Economic Research's latest midterm economic forecasts. 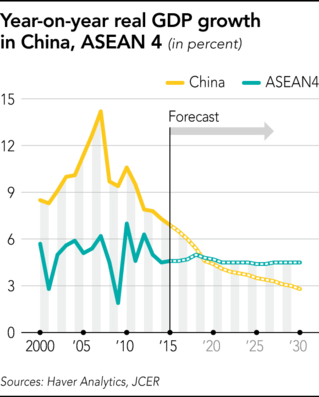 The center foresees relatively high growth in 2030 for the Philippines, at the lower-5% level, and Indonesia, around 5%. The GDP figures are smaller for Thailand, where expansion is expected to remain at around the mid-2% level, and Malaysia, with growth seen at around the lower-3% level. JCER does not see China becoming a high-income nation by 2030. As for the ASEAN-4, Malaysia is seen possibly joining the high-income group by the mid-2020s, but the other three are expected to remain middle-income countries.

With a slowing birthrate and longer life expectancy, China is seeing its working-age population shrink, with little prospect of a rebound. The 10% annual growth the country began logging around the turn of the century was fueled by massive investment, which has resulted in overcapacity and debt. With the government and businesses now trying to address these problems, investment is expected to grow at a slower pace.

Under such circumstances, China needs to improve productivity and achieve sustainable growth through structural reforms, including restructuring state-run companies, nurturing private businesses, raising the quality of the workforce and liberalizing the economy. But the progress of such reforms is expected to be hampered by the country's one-party rule.

The ASEAN-4's collective average annual growth has been slower than China's in recent years. But the four nations are seen narrowing the gap and overtaking China by 2019, and expanding their lead after that. That said, the ASEAN-4 can be divided into two groups, with the Philippines and Indonesia forming the high-growth half, and Malaysia and Thailand comprising the low-growth half. The former are seen as the main engines propelling the ASEAN-4's stronger expansion. JCER expects the Philippines to maintain growth of over 5% in the 2020s and Indonesia to sustain nearly 5% growth. In contrast, the center foresees growth of less than 4% for Malaysia and less than 3% for Thailand in the 2020s.

JCER foresees Malaysia's real economic growth averaging 3.5% between 2026 and 2030, down from 5% in 2015. The main dampening factor is the projection that the working-age population will grow just 1% during the same period, far lower than the 4.2% logged in the 2011-2015 period. JCER does not see investment in natural resources expanding much, due partly to falling crude oil prices and expects that capital stock will not increase significantly. For these reasons, growth in total factor productivity is seen as being a key factor. But with income levels rising, it will be more difficult to maintain the past TFP growth rate.

The government has made raising productivity a priority and has repeatedly expressed its intention to avoid the middle-income trap. In its 11th five-year plan, unveiled in May last year, the government pledges to carry out structural reforms between 2016 and 2020 to narrow economic gaps; improve welfare; develop human resources; address environmental issues; and build infrastructure to become a high-income nation. China's slowdown is another factor weighing on Malaysia's economy. As such, the importance of reforms for improving productivity is even greater. 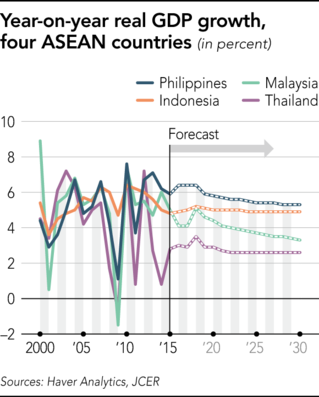 JCER sees raising productivity as key to achieving sustainable growth in Thailand. Specifically, that will require improving the quality of its workforce, narrowing income gaps, building transportation and logistics infrastructure, and nurturing new industries. Major Thai exports include home appliances and electronics products such as hard drives. But the competitiveness of those goods is expected to be eroded by changing industrial structures, such as a shift to new electronics devices. As JCER sees it, Thailand's strength as a production and export hub will decline unless it finds new main exports.

JCER expects the Philippines' real GDP to grow an average of 5.3% between 2026 and 2030, the highest among the ASEAN-4. A high birthrate means the country's population will grow to 124 million in 2030, up from 100 million in 2015. The working-age population is seen climbing to around 53 million, up from 41 million in 2015. The working-age population is forecast to expand an average of 1.6% a year in the 2026-2030 period -- the highest of the four. Consumption and investment are driving domestic demand. Consumption remains solid thanks to the growing population and more remittances from Filipinos working overseas. Investment in public infrastructure such as roads and airports is also seen expanding.

Business process outsourcing, already a big industry in the Philippines, is expected to become the next pillar of the economy. BPO refers to subcontracting back office operations -- such as personnel affairs, accounting, administrative work and customer services -- to a third party. The Philippines's key BPO services currently center on call center operations. JCER sees the industry growing further there because an increasing number of its companies have begun providing Information Technology-related services, such as producing sophisticated software for financial companies. Potentially problematic, however, is that the Philippines has been slow to nurture its manufacturing sector and faces widening economic gaps among its citizens. Its economic growth could fall below JCER's projections if the government fails to step up its efforts to address structural problems.

Indonesia is seen averaging 5% real GDP growth after 2020, making the country a driving force of the ASEAN-4's expansion along with the Philippines. A key advantage here is the country's stable population growth. The working-age population, which covers people ages 15-64, will account for about 70% of the total population in 2030. Also, increasing infrastructure investment is helping the country accumulate capital stock. Higher TFP, brought by deregulation, is also contributing to this.

A major task, as JCER sees it, will be nurturing the manufacturing sector. Resources drove Indonesia's growth in the 2000s against a backdrop of surging prices of crude oil and coal. That dynamic pushed down the manufacturing sector's contribution to GDP. With the commodity market sagging, the country's resource-dependent growth model is less effective than it once was. JCER sees it as imperative that the country attract foreign investment by nurturing manufacturers, boosting exports and creating jobs for the expanding working-age population.

Of those countries, only Malaysia will become a high-income nation by 2030 -- likely coming in the mid-2020s. China's per capita GNI will exceed $10,000 and continue to rise, but the country will nevertheless fall short of joining the elite group by 2030.

Among Thailand, the Philippines and Indonesia, Thailand has the highest income levels at present. But the other two are posting relatively high growth and thus likely to narrow their gaps with Thailand.