One after another, Beijing is pulling South Asian governments into its orbit 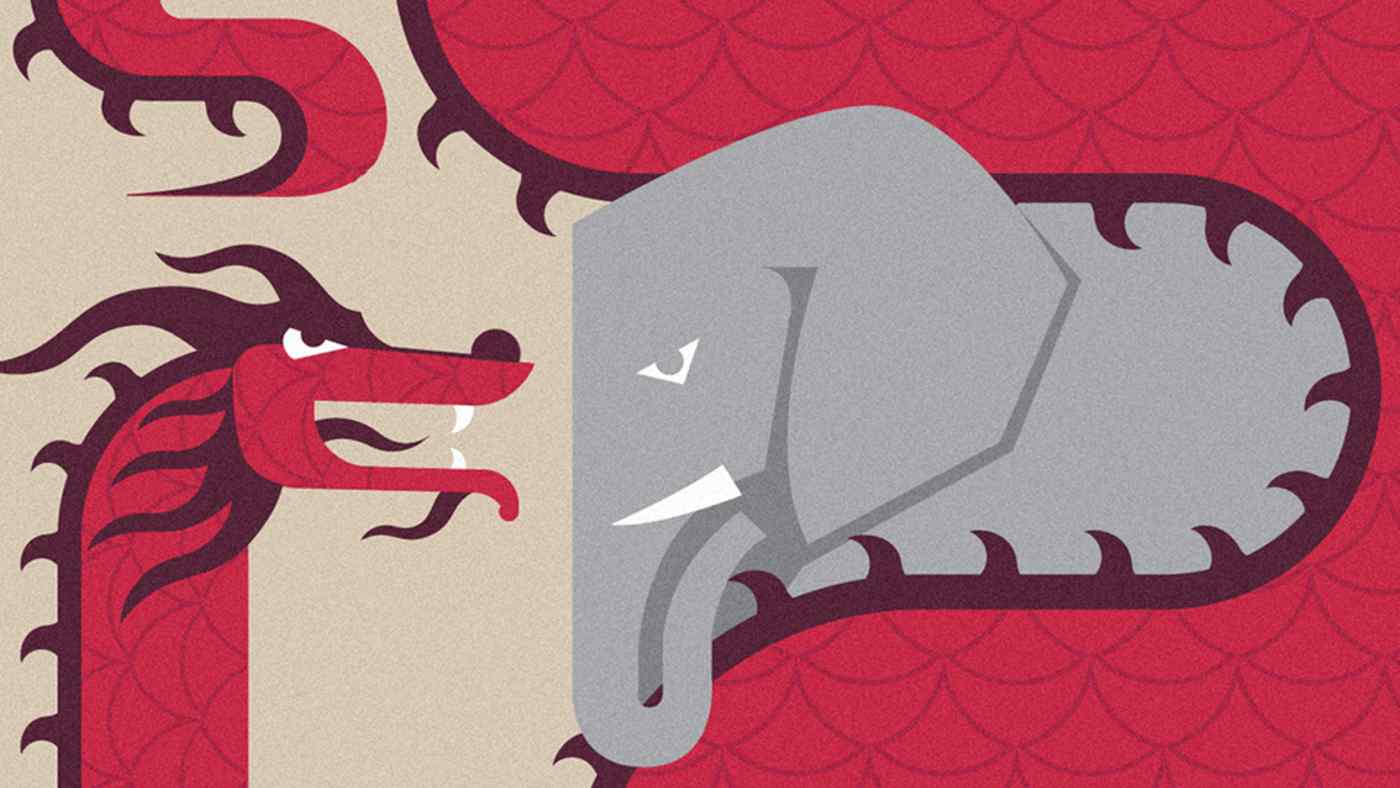 NEW DELHI Think of South Asia as a giant Othello board. The squares are countries and slices of coveted territory. The players trying to cover the board with their black or white pieces are China and India.

In a landmark election held over two stages -- on Nov. 26 and Dec. 7 -- Nepal's Communist coalition parties scored a crushing victory to regain power. Although high-ranking officials of the leading Communist Party of Nepal (Unified Marxist Leninist) have said they will maintain relationships with both China and India, they are not hiding their intention to break away from New Delhi's "micromanagement." 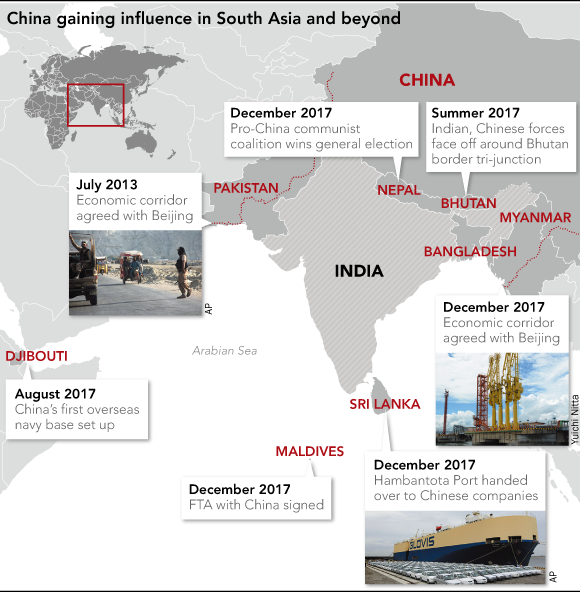 The power shift in Nepal came at "the prodding of China," said R.S.N. Singh, a former officer of India's intelligence agency. Beijing's "desperation" to play a bigger role in Nepal, Singh suggested, "was linked to India's tough and uncompromising position during the Doklam faceoff," in which Chinese and Indian troops stared each other down at the tri-junction with Bhutan from June to August this year.

Nepal is hardly the only country in India's neighborhood drawing closer to China. Until recently, many of these neighbors had been tough negotiators, playing the big rivals off each other to secure sweeter offers of financial support and other assistance. But much to India's dismay, countries seem increasingly inclined to simply move into China's orbit.

"[Our countries should] nurture new growth points, such as discussing the construction of a China-Myanmar economic corridor, so as to advance bilateral ties," Chinese President Xi Jinping told Myanmar's State Counselor Aung San Suu Kyi during her state visit to Beijing on Dec. 1. Suu Kyi, for her part, "agreed with China's proposal" for the corridor, Xinhua News Agency reported. 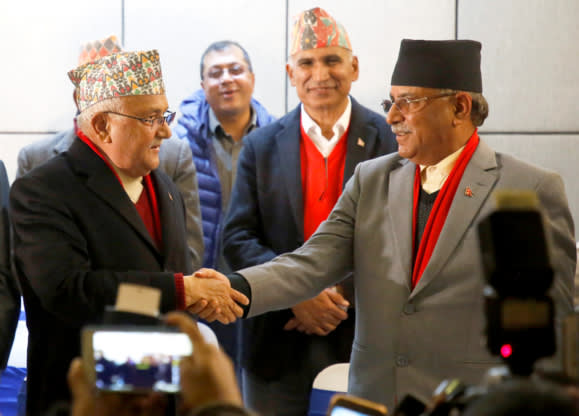 On Nov. 29, the Maldivian government called an emergency parliament session and hastily passed a free trade agreement with China while the opposition parties were absent. The 1,000-page document received the rubber-stamp treatment: "The agreement was sent to the parliamentary oversight committee on national security affairs within three minutes of submission to the floor," said Hamid Abdul Ghafoor, a spokesperson for the opposition Maldivian Democratic Party. "The committee vetting the agreement took less than 10 minutes."

MILITARY TOEHOLDS Over the past several years, Maldivian President Abdulla Yameen has been pushing aside one political foe after another. He appears to see China as a helpful partner in cementing his grip before a presidential election next year.

Joshi noted that Gadu is next to the island of Gan -- where the British navy had a base during World War II -- and that the deep water is well-suited for a "submarine base." 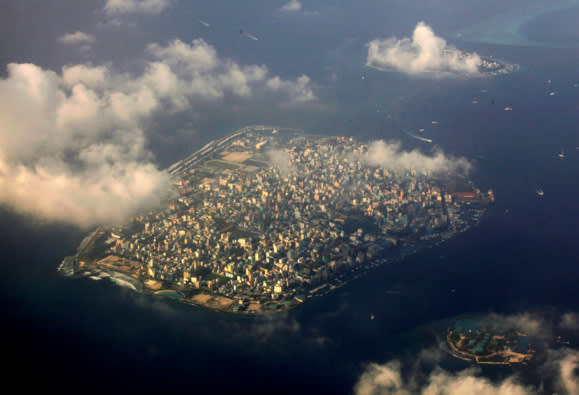 Gwadar, which is already run by a Chinese company, "will become a naval facility for China," Ashok Kantha, India's former ambassador to China, warned bluntly. Like Sri Lanka, Pakistan has seen its debt to China increase, with the Chinese side covering most of the cost of the estimated $62 billion corridor project. There is speculation that Pakistan could eventually face insolvency.

INDIAN PUSHBACK India, of course, is not sitting idly by as China entrenches itself all over the region.

The standoff in Doklam was the closest the countries had come to a military clash in the last half century, partly because India refused to let its rival have its way. China had started building a road in an area also claimed by Bhutan, only several hundred meters away from India. New Delhi dispatched troops to stop the project, resulting in a hair-trigger situation that lasted two months.

India has been flexing its military muscle in other ways, too. Prime Minister Narendra Modi on Nov. 22 praised the Indian Air Force: "Delighted on the successful maiden test firing of Brahmos ALCM from Su-30MKI. Congratulations to all those associated with this remarkable feat."

"The Strait of Malacca also is covered in its range, if the missile is fired from Andaman and Nicobar Islands," an Indian defense official told the Nikkei Asian Review, explaining the significance of the test.

But even with such missiles, India is no match for China when it comes to weaponry and military spending. The Chinese economy is nearly five times larger than India's, and New Delhi simply does not have the financial resources to bring neighbors to its side.

Yet India is eager to sign the deal because it would give China something to think about. It would not take much to turn the airport into an air base in a crisis. Meanwhile, over in Bangladesh, a plan to have China back the development of the port of Sonadia appears to have been scrapped. Rumor has it Indian diplomatic pressure played a role in the decision.

Some countries that have strengthened their ties with China may be having second thoughts about relying on the superpower. Ghafoor, the Maldivian opposition spokesman, said, "We are deeply concerned that further entrenchment of the country into a Chinese debt trap will result in additional stress on strategic national assets and increasing instability in the Indian Ocean region."

China sounds confident it can overcome such worries -- even in India itself. "We believe that as long as we continue to engage in in-depth strategic communication and promptly dispel strategic misgivings, the strategic value of China-India cooperation will speak for itself, and there will be a prospect of 'the dragon and the elephant dancing together,'" Chinese Foreign Minister Wang Yi said in a speech on Dec. 9.

"The 21st century is Asia's century," Modi tweeted after Wang's remark. "Our Government accords highest importance to the Indian Ocean region, guided by the principle of Sagar -- Security And Growth for All in the Region."