China has international ambitions for the yuan

BEIJING -- Chinese President Xi Jinping has been moving aggressively on one of his administration's key polices, the internationalization of the yuan. 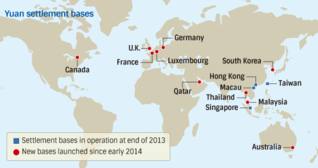 With the world's biggest foreign currency reserves, close to $4 trillion, China is racing to create an alternative to the dollar-dominated economic bloc. If realized, the Chinese currency will be used for many more international settlements.

In June 2014, the U.S. Department of Justice said it would slap an exorbitant penalty on France's biggest bank, BNP Paribas, for processing financial transactions for countries subject to U.S. economic sanctions, such as Iran and Sudan. The news provoked resentment among European countries who felt the U.S. was forcing its rules down their throats.

Immediately, Chinese authorities designated banks in Britain and Germany for yuan clearing and settlement. It then set up such yuan offshore service bases in France and Luxembourg. As the yuan cannot be traded freely for other currencies, the only way to use it for cross-border transactions is to get China's approval for establishing a settlement bank. When yuan is in short supply, settlement banks make it possible for any given country to procure the currency from China at any time.

Up until 2013, Beijing allowed such banks only in the so-called Greater China markets: Hong Kong, Macau, Taiwan and Singapore. Yet, Beijing already added Malaysia and Thailand to the list in January, and has launched offshore yuan settlement bases in 10 new countries over the past year. The move is part of China's strategy to globalize the use of yuan by utilizing overseas branches of major state-owned Chinese lenders.

There are growing signs of change. An executive at a foreign bank, recently posted to Shanghai again, was surprised to see the yuan now used for most international transactions in Sinopec group documents. "Things have changed a lot since five years ago," said the executive. Sinopec, as China Petroleum & Chemical is widely known, procures approximately 70% of China's overall crude oil imports.

The dollar lost confidence in the wake of the global financial crisis triggered by the 2008 collapse of the U.S. investment bank Lehman Brothers. Since then, Beijing has been seeking ways to gradually internationalize its currency for trade and investment. At the time of the Lehman collapse, China's main aim was to wean itself off dollar dependence. The value of the yuan and Chinese corporate earnings were being affected by currency market swings. In other words, China initially sought to internationalize its currency to safeguard itself and Chinese businesses.

Now, President Xi is aiming to create an alternative to the dollar.

Countries are preparing to respond. South Korea, for instance, aims to boost the ratio of yuan-denominated transactions to 20%, a 20-fold increase, in its trade settlements with China. Meanwhile, George Osborne, Britain's chancellor of the exchequer, recently said his government would turn London into a global center for yuan-based transactions.

Hu Xiaolian, deputy governor of the People's Bank of China, the central bank, noted that more than 30 countries in Europe, Asia and Africa held yuan as their foreign currency reserves.

Still, the yuan cannot yet be freely traded in global markets, unlike currencies such as the dollar, euro and yen. For its yuan diplomacy, Beijing uses this inconvenience to its advantage. It selects partner countries and affords them benefits by easing investment, settlement and other rules.

Such an ill-balanced strategy has limits. While the U.S. dollar accounts for more than 40% of international settlements, yuan-denominated settlements come to less than 2%. The U.S. has imposed economic sanctions against Russia in the wake of Moscow's aggressive actions toward Ukraine and has demonstrated the dollar's strength as a key currency. By contrast, China's economic engine has begun to sputter and the yuan dropped against the dollar in 2014, for the first time in five years.

China is unable to control the free flow of money around the world. Advanced economies have repeatedly suffered setbacks caused by negative chain effects in financial markets. Now, it is China's turn to experience how difficult it is to maneuver through such rough waters ahead.