The multinational lending institution's latest financial statement shows that the bank's impairment provisions have jumped nearly tenfold during the first half of 2020 from a year earlier, cutting its net profit by more than half during that same period. Although the results have not affected AIIB's credit ratings, one expert said he is "not at all surprised" at the jump in impairment provisions given the global coronavirus pandemic and the deteriorating global economy.

The bank's impairment provisions, while still small relative to its first-half loan investments of nearly $3.5 billion, from January to June stood at $105.82 million, compared with $10.99 million a year earlier. That largely contributed to the 54% decline in net profit to $100.17 million in the first half.

The sharp spike in impairment provisions is attributable mainly to the "increase in investment exposures," especially with the launch of the "Crisis Recovery Facility" in April, an AIIB spokesperson told the Nikkei Asian Review in an email reply to questions about its financial statement.

The emergency plan provides funding for both public and private sectors to its members to meet financial needs under the pandemic. The bank has committed to offer $13 billion until October 2021. The AIIB, in which China holds a stake of more than 30%, has grown from 57 founding members to 103 approved members from around the world. 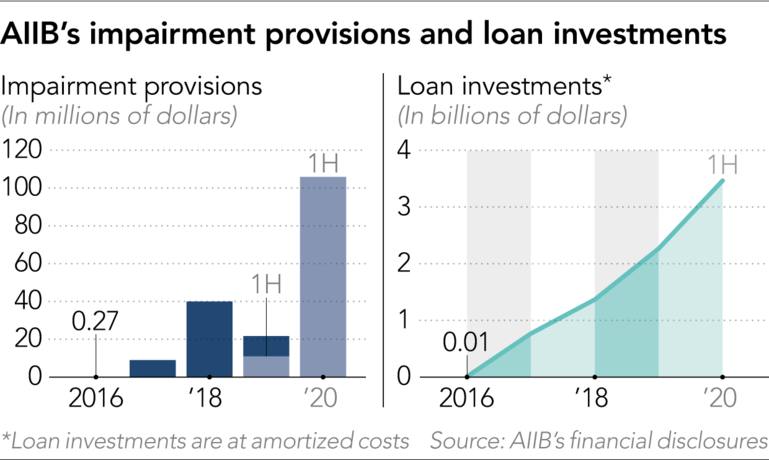 Another key factor that pushed up impairment provisions, according to the spokesperson, is "worsening macroeconomic outlooks largely as a consequence of the pandemic."

Troubled loans, particularly those held by developing economies, have been recognized this year as a global concern.

The Asian Development Bank has also seen its provisions for credit losses increase amid the pandemic. In its half-year financial update released on Friday at the end of its annual meeting, the bank reported that provisions rose to $191 million from $19 million a year before.

The bank linked the rise mostly to the adoption of a new accounting standard this year which expanded the scope of expected credit losses and off-balance sheet exposure to be reported. However, in its first quarter update, the bank said that the "change in macroeconomic forecast stemming from the COVID-19 pandemic resulted in a higher level of expected losses."

"Financial cooperation that we need right now is on the restructuring of debts for emerging market and developing countries," Joseph Stiglitz, a Columbia University professor, said this week. Speaking via teleconference from the U.S. to the Foreign Correspondents' Club in Hong Kong, the Nobel Prize-winning economist stressed: "[The] pandemic means that many countries are not going to be able to repay what they owe."

The jump in impairment provisions reflects the increase in forward-looking credit loss allowances as defined by International Financial Reporting Standards, or IFRS, which the AIIB has adopted since it was launched in January 2016. During the first half of the year, part of its loans were reclassified from Stage 1 loans -- meaning no significant credit risk -- to Stage 2 loans, in which credit risk has "increased significantly."

These Stage 2 loans are concentrated in southern and western Asia, where there is overlap with countries engaged with the Belt and Road Initiative, a key geopolitical strategy for Beijing.

Among the newly increased impairment provisions, about 20% were derived from the downgrading of part of its bond investments to Stage 3 -- the lowest classification under the IFRS rule and defined as "credit impaired."

The bank said that was caused mainly by two bonds issued by the same entity. Details of the issuer have not been disclosed, but it is now undergoing restructuring. The bank initiated a bond investment portfolio during the third quarter of last year.

The three major global rating agencies, however, have kept their highest "AAA" or "Aaa" ratings for the bank, with a "stable" outlook, despite the disclosure of the latest first-half results.

Alexis Smith-juvelis, an analyst at S&P Global Ratings, told Nikkei in an email that "COVID-19 has created economic stress globally, affecting ratings and key macroeconomic variables used in the estimation of expected credit losses, and is a key driver of the increase in impairment provisions."

She said that with the average level of nonperforming loans at multilateral financial institutions at around 4% to 6%, "we naturally expect that NPLs will increase as AIIB expands its lending book in combination with asset quality pressures as a result of COVID-19." However, with "extremely strong capitalization" and "robust risk management policies," the current situation "would not necessarily result in rating pressures," she said. 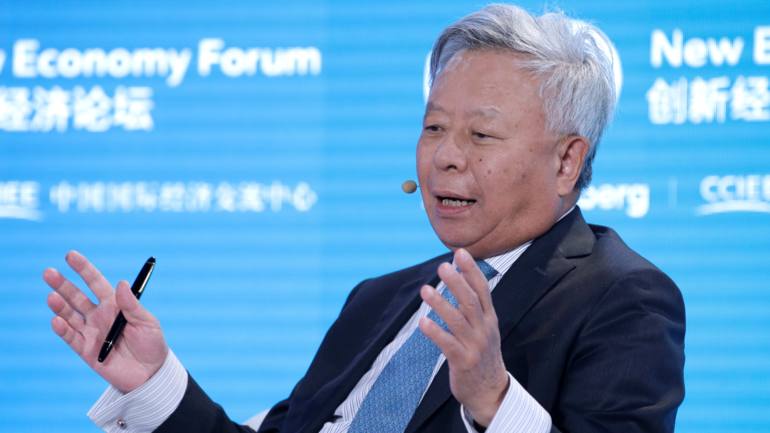 Fitch Ratings offered a similar assessment. Nicholas Perry, associate director of sovereign ratings, and Arnaud Louis, senior director and head of supranational ratings, said in an email that "over the past six months, we have seen increases in the transfer of Stage 1 assets to Stage 2 at many [multilateral development banks] we rate, given the current economic and credit rating uncertainty."

Since no Stage 3 loans have been reported, the Fitch analysts estimate that AIIB's impaired loans will remain around 2%, unchanged from what it published in early July. Going forward, they view quality of governance to be one of the key points when evaluating the potential ratings impact, but the agency "currently assesses AIIB's governance as low risk," as its system is similar to that of its regional peers.

"It is not [an] easy task to build a development bank pretty much from scratch with the right systems, culture, governance and processes," Cainey said in an email. But he pointed to possible challenges for the bank in terms of credit quality control. There is "certainly a sign that risk assessment is tough in many of the economies to which AIIB lends -- and that takes time to build, need to learn as you go."

Robert Bestani, adjunct professor at Georgetown University in Washington, told Nikkei: "I am not at all surprised that AIIB's impaired assets have ballooned out." The former director general of private-sector operations and finance at the ADB noted that the global economic outlook was "very tenuous even before the COVID-19 pandemic," including the Chinese economy itself slowing down due to various structural issues.

"All of these reasons would make it very difficult for the emerging countries of the world to repay their already inflated debts," he said. Even though AIIB has been trying to keep a certain distance from the Belt and Road Initiative economies, "they are separately lending to many of the same countries which have been or are now very concerned about the BRI debt trap," he said.

Bestani also questions AIIB's dependence on sovereign loans, saying "it is not clear to me that the AIIB has been -- or can be -- as successful as we were at the ADB in promoting private-sector loans."

Due to various constraints on lending by multilateral institutions, the competition with private-sector lenders tends to end up in cutting interest on loans, which made traditional players such as the ADB and the World Bank to "return back to its members far too often for new capital," even though they were all meant to be financially self-sufficient.

"It is an open question how long -- particularly in bad economic times -- this can go on," Bestani said. "I suspect the same is true for the AIIB."