China has completed this segment of the railroad, between the Sichuan Province cities of Chengdu and Ya'an. (Photo courtesy of a local government website)
SHUNSUKE TABETA, Nikkei staff writerMarch 4, 2021 02:21 JST | China
CopyCopied

BEIJING -- China has begun construction of a rail line that would greatly improve access to Tibet at a cost of 319.8 billion yuan ($49.4 billion), as Beijing seeks to tighten its grip on the region and tap the abundant natural resources.

The envisioned 1,800 km railway will connect Lhasa in the Tibet Autonomous Region to the Sichuan Province capital, Chengdu. Service is slated to start around 2030.

China aims to boost tourism and business travel to Tibet. The goal is to promote economic development to weed out public discontent, which led to the ethnic unrest in 2008. Beijing is also eager to get its hand on the region's resources, such as copper and lithium.

Qi Zhala, the Communist Party chairman of the regional government, touched on the rail project during Tibet's People's Congress held in January.

Currently, those traveling between Chengdu and Lhasa by train would need to meander through Gansu and Qinghai provinces, an itinerary that takes about 40 hours. The direct connection will have trains traveling at speeds between 120 and 200 kph, which is expected to cut the travel time to a little more than 10 hours.

Qi laid out a medium- to long-term plan starting this year that called for accelerating infrastructure building under the banners of ensuring national security and raising the quality of life of the people. This is in keeping with Xi's statement during the groundbreaking ceremony of the rail project in November.

A railway connecting Tibet with neighboring Sichuan has been a concept dating to Sun Yat-sen, the Chinese leader who spearheaded the 1911 Xinhai Revolution that overthrew the last imperial dynasty. The first part of the link was completed between Chengdu and Ya'an, as the segment has relatively even elevation. Construction is also ongoing for another segment inside Tibet. 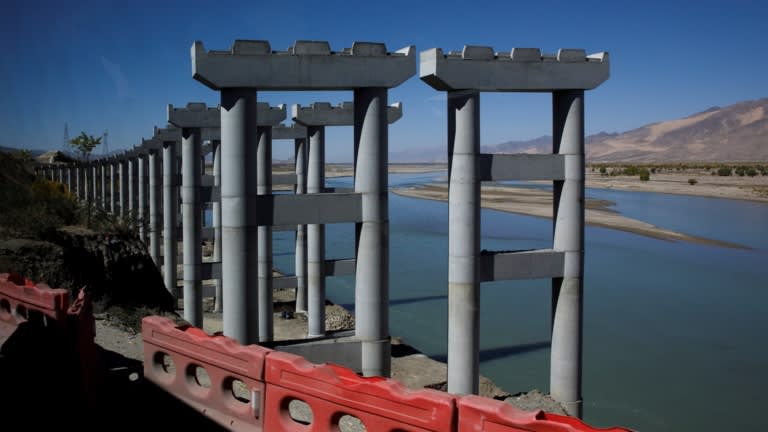 A highway is being build in the Tibet Autonomous Region as part of China's economic development drive.    © Reuters

As part of economic development, a series of hydroelectric dams is being constructed along Tibet's Yarlung Tsangpo River. Together they will generate 60 gigawatts of power, triple the output of Three Gorges Dam.

The project is mentioned in China's five-year plan through 2025 and its long-term goals through 2035. But the project could face pushback from India, which is in a border standoff with China. Water from Yarlung Tsangpo flows into India, and development along the river risks affecting the water level downstream.

Xi and other top officials appear to be ramping up resource development in Tibet in line with the "dual circulation" policy, which seeks to correct China's dependence on external demand. A new rail line would save on time and cost for transporting raw materials and processed goods to major cities.

Tibet is the leader among provinces in terms of copper deposits, according to local media. The autonomous region is also known as a major producer of lithium, a key component in electric vehicle batteries, zinc, chromite and beryllium, a rare metal.

"An abundance of resources lies in Tibet, and we will develop the resources so that we won't become dependent on overseas supplies," said a senior government official.

China has invested 313.6 billion yuan into Tibet between January 2016 and October 2020, 17% more than initially budgeted. The investments appear to have borne fruit. The autonomous region's gross domestic product rose 7.8% last year, the highest rate in China, with at least 9% growth expected this year.