Full-year estimate lowered to 1.6% as export headwinds and COVID-19 weigh HONG KONG -- China's economy likely expanded 1.1% in the April-June period on a recovery in production and consumption, rebounding from a 6.8% contraction for the previous quarter during the peak of coronavirus cases in the country, according to the consensus of economists surveyed by Nikkei and Nikkei Quick News.

Estimates for the second quarter of 2020 ranged from negative 5.2% to positive 3.6%, with 22 of 26 economists who answered this question projecting growth.

"We expect the economy to continue to recover from the second quarter onwards, mainly led by industrial production and investment," Wu said. 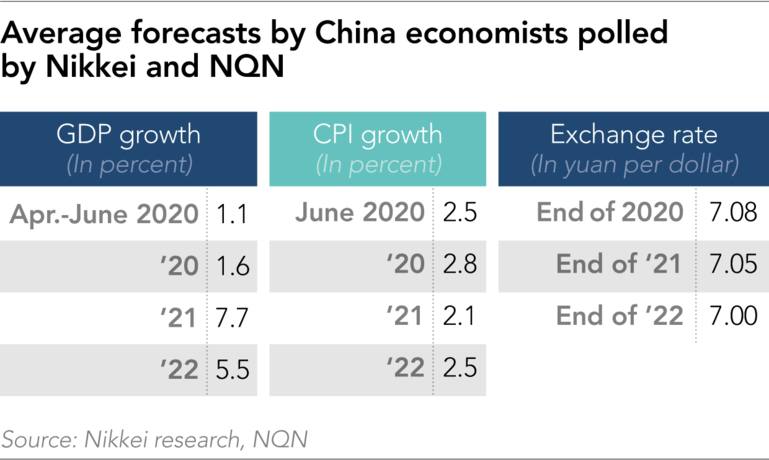 China has contained an explosion in COVID-19 infections through strict lockdowns, resuming economic activities ahead of the U.S. and European countries.

A rise in materials prices and a recovery in sales of construction machinery testify to a pickup in domestic demand, said Cheng Shi, chief economist at Industrial and Commercial Bank of China International, adding that growth firms up "in every quarter."

But the recovery is far from a V-shaped rebound. The average forecast of full-year growth for 2020 came to 1.6%, down from 3.3% in the previous survey in March.

"We believe that China will face increased headwinds in the export sector in the coming months," Altermatt said.

China's GDP could contract as much as 1.2% in 2020, said Jian Chang, chief China economist at Barclays Asia Pacific. She cited "a potential further escalation in Sino-U.S. trade or financial tensions as a major downside risk for growth."

Asked when they expected Chinese economic activity to return to normal, 32% of respondents predicted the July-September quarter while 41% forecast the October-December period. Only 14% said it had already normalized during April-June.

"About 90% of the workforce is already back to work," said Sean Taylor, Asia-Pacific chief investment officer at DWS. "Car demand has also returned back to pre-crisis level. Even hard-hit sectors such as domestic flights and hotel occupancy rates are only 20% below pre-crisis level."

But Moody's Analytics economist Xu Xiaochun offered a reserved forecast for 2021 due to the heavy losses this year.

China "most likely will need to wait for vaccine to be available before the speed can return to a sustainable pre-COVID growth path," Xu said.

Many economists warned that deteriorating employment will harm consumption as income declines. Given choices to select the effect of the coronavirus pandemic on China's economy, many picked an "increase in unemployment" or "decline in consumption."

"As differences in competitiveness before the COVID-19 outbreak will become more evident, financially weak companies will tend to default on their obligations," said Mihoko Hosokawa, research executive at Mizuho Bank (China). "Liquidation and shakeout of businesses will advance."

With U.S.-China trade frictions spreading to technology and finance, development of advanced tech will drag, said Paul Tang, chief economist at the Bank of East Asia. Tang added that "the ability of Chinese firms to find offshore funding will be weakened."

The unemployment rate in China's official statistics has been called into question. The rate came to 5.9% in May, up slightly from 5.3% in January. Experts note that the survey is limited to urban areas and does not include workers who have returned to rural villages after failing to find jobs.

Economists in the survey put the real jobless rate between 8% and 23%. Kevin Lai, chief economist at Asia ex-Japan of Daiwa Capital Markets, gave an estimate of 20%.

"Self-employed workers and rural migrant workers are heavily impacted by the coronavirus outbreak," he said. "The official unemployment rates may not fully reflect these influences."

"If a situation of not working is simply defined as unemployment, the rate stood at about 50% in February, is 10% or so at present and will drop to 7% to 8% at the end of this year," said Tetsuji Sano, chief Asia economist at the Asia Research Center of Sumitomo Mitsui DS Asset Management (Hong Kong).