SINGAPORE -- Singapore's three largest banks all posted record profits for 2014, backed by strong domestic loan expansion and their aggressive approach in regional markets. But as these banks expand their international operations, they are also becoming more exposed to the risks associated with China's economic slowdown, making analysts and investors wary of a rise in bad loans and allowances.

DBS Group Holdings, Singapore's largest lender, recorded a net profit including one-time items of 4.04 billion Singapore dollars ($2.98 billion), a 10% increase on 2013 and above the S$4 billion mark for the first time. Income from interest rose thanks to the expansion of corporate loans, which carry higher interest rates. Despite its strong performance, DBS's stock price fell slightly on Feb. 10 after the bank released its results in the morning. Investors were concerned over a surge in allowance for Greater China loans in the final quarter of 2014. The allowance for Greater China loans excluding Hong Kong quadrupled from the same quarter in 2013 to S$40 million, bringing the bank's total allowances to S$211 million, up 40% from a year ago. The higher provision weighed DBS's earnings down more than many analysts expected.

"We have built substantial allowances and have [an] extremely good cushion for any downfall," DBS CEO Piyush Gupta assured investors at a press conference announcing the results. However, he cited "China-idiosyncratic risks" as a factor for this year's outlook.

China's bad-debt risk also affected results of Oversea-Chinese Banking Corp., Singapore's second-largest bank. Although its profit for last year increased 39% from 2013 to S$3.84 billion -- the highest profit growth out of the top three lenders -- OCBC's shares ended flat on the day of the announcement. 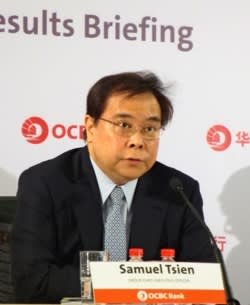 A large part of the profit growth came from to its stronger operations in China, boosted by last year's acquisition of Hong Kong's Wing Hang Bank. However, the integration also resulted in higher nonperforming loans in China. Although the ratio of bad loans to total loan volume in December 2014 fell to 0.6% from 0.7% the previous December, bad loans on mainland China and the surrounding areas increased to S$185 million, up 71% from a year ago. The bank's allowances for the region more than doubled from 2013 to S$511 million.

Following the results, Malaysia's Maybank Kim Eng said in a report that it will maintain its "cautious tone" on OCBC's shares, adding, however, that the higher provision "may come in handy in any credit slippage ahead."

Despite slower financial progress than expected by analysts, OCBC's CEO Samuel Tsien remained positive on synergies between its Chinese and Southeast Asian operations. "Wing Hang integration is progressing faster than expected," Tsien said, adding that the bank expects to see more growth in its China business this year.

In contrast with the other two banks, United Overseas Bank's results beat analyst estimates. The bank's full-year profit for 2014 came to S$3.24 billion, increasing 8% from a year ago. Total loans grew by 9.5%, while net interest income expanded 10.6% in 2014. The bank has the smallest loan exposure in China among the three major Singaporean players. For 2014, loan growth was particularly high for intraregional loans originating in China. Despite this expansion, the bank managed to reduce nonperforming loans in China by S$2 million over 2014 to S$124 million.

The slowdown of the Chinese economy could create ripple effects. Its weakened demand for oil, for example, could push crude prices even lower. Indeed, bad debts arising from tougher business conditions in the oil and gas sector are cause for concern, but DBS's Gupta stressed that the bank's exposure to the industry is low. "We are well-conditioned, and we haven't identified any weaknesses in our book," he said. OCBC noted that loans from the oil and gas sector accounts for less than 7% of its S$210 billion loan book, while UOB said it was less than 5%.