HONG KONG-- Economic experts specializing in China forecast that the country's gross domestic product will grow 6.5% on average in 2018, down from the estimate of 6.8% for 2017, according to a joint survey by Nikkei Inc. and Nikkei Quick News.

Beijing's monetary tightening is causing investment in real estate and infrastructure to fall, but solid personal spending and exports will keep the economy from sliding too far.

Asia braces for the end of easy money

During the country's recent Central Economic Work Conference to set economic management policies for 2018, Beijing decided to lessen financial risk by trying to curb borrowing by businesses and individuals.

"Beyond the first quarter of 2018, growth should taper more visibly due to the tightening measures on credit and housing," said Aidan Yao, senior emerging Asia economist at AXA Investment Managers Asia.

Many respondents forecast that the housing market, which was showing signs of overheating mainly in metropolitan areas, will cool. "At the 19th Chinese Communist Party Congress held in October, more emphasis was put on quality and equality aspects of China's growth model, including environmental goals," said senior economist at ABN AMRO Bank, Arjen van Dijkhuizen.

Xia Le, chief economist for Asia at BBVA Research, had a similar view. "The Chinese economy will go for a period of moderation, meaning that from this year on, growth will gradually decline." As for monetary policy in 2018, many expect that the People's Bank of China will keep the policy rate and the reserve requirement ratio unchanged. But some think the PBC may raise the interbank rate slightly to curb borrowing. "The current economic expansion is mainly fueled by credit growth at the cost of higher leverage in both the household and corporate sectors," noted Shen Jianguang, chief China economist with Mizuho Securities Asia. "Higher funding and leveraging costs will lead to less investment, thus slowing economic growth, in our view."

The central bank's clampdown on wealth-management products will likely deal a blow to regional governments, real estate companies and smaller banks, many of which have relied on the shadow banking system for financing.

However, the government is expected to maintain a cautious approach to policy management to prevent the economy from losing too much steam. "The impact may not be that large, and can be managed, given that the process is a very gradual one," said Wang Tao, head of China economic research at UBS. "Its pace can be adjusted if growth slows too much."

The two main risk factors for an economic slowdown are monetary tightening and correction in the real estate market. "There is a risk of over-tightening of macro and financial policies as policy shifts towards quality of growth," warned  Zhu Haibin, chief China economist at JP Morgan. "Better-than-expected economic outcomes this year may cause policymakers to overestimate the resilience of the Chinese economy and underestimate the negative effect from unloading capacity and deleveraging."

The average forecast of economists for the dollar-yuan rate at the end of 2018 was around 6.73 yuan, a 1.4% decline from the end of 2017. The U.S. Federal Reserve Board is likely to raise its key interest rates next year, but many survey respondents think China will keep restrictions on capital outflow intact to maintain a stable yuan. 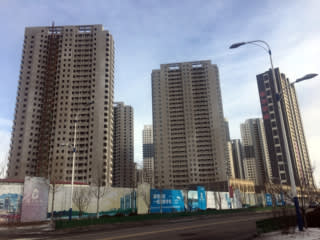 A half built apartment complex is seen in the New Area of Dandong, Liaoning province, China.   © Reuters

Fan Xiaochen, head of economic research at the Bank of Tokyo-Mitsubishi UFJ's Economic Research Office (Hong Kong), said widening gaps in U.S. and Chinese interest rates -- and uncertainty over trade -- will force downward pressure on the yuan. However, Beijing will not tolerate a drop in the yuan's value. Bank of Singapore chief economist Richard Jerram says tighter capital controls mean that policymakers can manage the exchange rate.

The respondents feel that U.S. tax reforms will have only a limited impact on the capital flows between the U.S. and China. "The overseas funds of U.S. corporations are stored mainly in tax-haven economies, not China," said Ricky Choi, senior economist at the Economic Research Division of the Bank of China (Hong Kong). "It is believed that most of them are already held in U.S. dollars. Thus, any repatriation of funds is not expected to affect China."

JP Morgan's Zhu argued that the global supply chain has formed around China, and it will take a long time to change the current network structure.

On the other hand, Ken Chen, Chinese economy analyst at KGI Asia, warned that China will have to tighten regulations on capital outflows if the U.S. economy recovers at a faster-than-expected pace and attracts money from around the world.

Economists responding to this survey: