US plunges in popularity, reflecting Beijing's relations with Washington The Beijing Capital International Airport is the annual gathering spot for millions of Chinese who travel overseas during a weeklong string of holidays that begins Oct. 1.   © Kyodo

Along with Chinese New Year, the Oct. 1 National Day, which celebrates the founding of the People's Republic of China, is one of China's two biggest holidays and a business bonanza for retail and travel industries.

Last year, domestic consumption came to 1.3 trillion yuan ($189 billion) during the October holidays. This year, seven million Chinese are expected to go abroad. The number represents 5% of all overseas travelers who leave from China annually.

According to travel booking website Ctrip, this year's No. 1 destination is Japan, which bumped Thailand, last year's top spot, into second place. The top eight destinations are all Asian countries or territories.

Reflecting Chinese people's love for soccer, Senegal and Iceland, whose national teams played in this year's World Cup, have seen a spike in reservations.

The U.S. national team did not make it to the World Cup, but that is not the factor dissuading some Chinese from visiting the country. According to Ctrip, Chinese travelers place a lot of weight on the current state of foreign relations when deciding where to vacation, and Sino-U.S. relations have been strained since Donald Trump was inaugurated as president at the beginning of 2017. The trade war that has been heating up lately has not helped the U.S. in this regard.

America is now the 11th most popular destination for Chinese tourists, down from No. 5 last year, according to Ctrip. South Korea, meanwhile, has jumped to fourth most popular, from 17th last year.

Meanwhile, Japan's top billing could have something to do with the meeting between Prime Minister Shinzo Abe and Chinese President Xi Jinping in the middle of September.

Chinese media reported on these events, and Japanese businesses that rely on Chinese holidaymakers grew concerned.

But the disasters were not enough to give Chinese travelers second thoughts. A Ctrip representative said this is because Japan offers a variety of shopping, hot spring and other destinations that make it easy for foreign visitors to change plans on the fly, according to whim, weather or temblor. 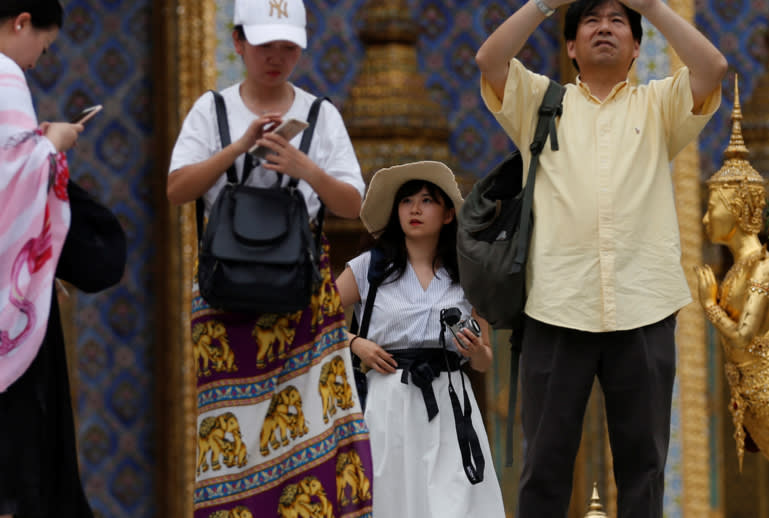 Chinese tourists are still flocking to Bangkok and snapping pictures at the Temple of the Emerald Buddha, but Thailand is no longer their favorite vacation destination.   © Reuters

While Osaka and Hokkaido risk hosting fewer Chinese visitors than during previous National Day vacation periods, but word of their recoveries is spreading on social media. Most Chinese travelers are beginning to shrug off the possibility that these destinations could make traveling difficult. Japan, they reason, is better prepared than China to handle disasters.

Japan has been a popular destination among Chinese tourists since 2015, but Tokyo and Osaka host the great majority of the country's Chinese visitors. More recently, though, Chinese tourists have been indulging their sense of adventure by making their way out of the big cities.

There are, however, other concerns. Earlier this month, the U.S. announced the latest round of tariffs on Chinese exports. China retaliated with a new round of its own tariffs on goods it buys from America. Inflation could set in and hit ordinary Chinese in the wallet.

In other words, the U.S.-China trade war could take a swipe at Japan's economy, which partly relies on free-spending Chinese tourists.

There is more. Chinese investors have been watching the benchmark Shanghai Composite Index trend lower due to all the global uncertainty. The result is a negative wealth effect among some well-to-do Chinese, whose evaporating equity could convince them not to splurge while on vacation.