Sales in the retail and food-and-drink industries grew 8.5% to 1.005 trillion yuan ($149 billion) over the weeklong holiday, the Ministry of Commerce said Sunday, down 1.7 percentage points from 2018 and the lowest growth rate in data going back to 2005 when such data was first collected.

Many people head to home provinces or go on vacations over the Lunar New Year and October's National Day holidays, making them profitable seasons for sectors such as retail. But headwinds like the U.S. trade war are battering the Chinese economy, sending stock prices lower and contributing to a slowdown in the real estate market. These factors have reduced people's sense of wealth. In heavily industrial areas like Guangdong Province, increasing numbers of businesses are cutting payrolls, a further blow to consumer sentiment.

The slowing spending growth over the New Year holiday is viewed as a barometer of spending for the rest of the year.

Customers were sparse at one Shanghai shopping center Saturday afternoon, with a number of visitors apparently sticking to window shopping at the facility's many brand-name stores.

"Everything's too pricey for me," said one 49-year-old man, a company worker from Shandong Province. "I'm just enjoying seeing the sights."

Growth faltered even for movies, which have taken hold as the holiday leisure activity of choice. Box-office receipts over the holiday appear to have stayed roughly flat from 2018 at around 5.8 billion yuan. Many forecasts in Chinese media called for the tally to surpass 6 billion yuan, but only three films neared the 1 billion yuan benchmark for hit status, and attendance did not grow.

Theme park Shanghai Disneyland, a popular Lunar New Year destination, enjoyed a strong showing of visitors from outlying areas. The park sold out of tickets for Saturday in the morning, leaving staff to offer explanations to guests unable to get in. 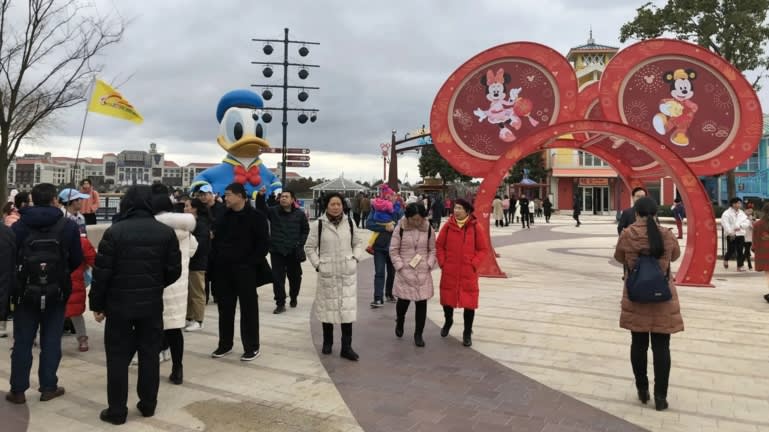 The picture was bleaker for domestic travel as a whole. The number of people traveling within China rose only around 7% year on year to 415 million, compared with growth of around 12% in 2018.

A record 7 million Chinese appear to have traveled overseas over the holiday, however. Though their spending abroad was outside the scope of the Commerce Ministry's report, such travelers appear to be moving on from the big purchases that they had become known for in recent years. They increasingly appear to be shifting from shopping to sightseeing.

Still, Chinese tourists' overseas consumption "will not fall drastically," said Xu Xiangdong at China Market Research & Consulting. Xu predicted an increase in travelers from China's regional cities, where disposable incomes are relatively high and the cost of living lower than in major metropolises.

But a resurgence of the shopping sprees of the past is unlikely, Xu said. "Businesses ought to cater to the diversifying needs of the Chinese consumer," he said.