Zhengzhou, the 10m-strong capital of Henan province, is one of China's best connected cities. It sits at the heart of the country's new high-speed railway network (see map), cargo trains run from here to Germany, and its air freight hub is a central cog in the global iPhone production chain. 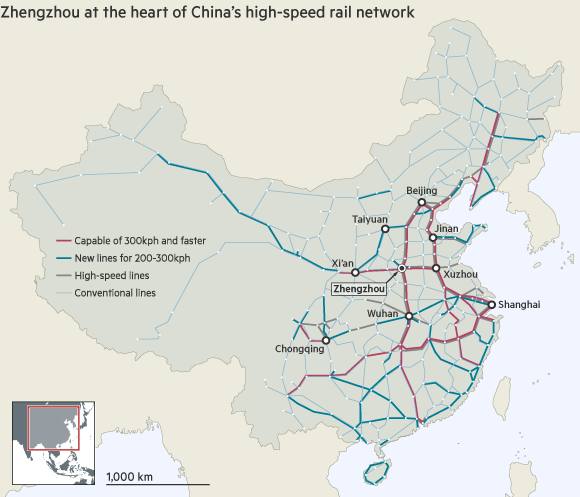 The success of the Communist Party's unique embrace of market economics will in part be decided by its ability to raise living standards in cities like Zhengzhou. As east-coast regions reach developed world levels, the government is trying to repeat the trick in inland areas. Zhengzhou lies in the middle of the Central Plain Economic Zone, a government plan to develop Henan and its environs, encompassing 180,000 square miles with a population of more than 160m residents.

Zhengzhou's economy largely runs on government intervention, both through a financial system geared towards serving state firms and through ambitious infrastructure projects. Developers believe the government will soon have to lift restrictions on buying property because the housing market is too important for the city's growth (see chart). A handful of private firms are thriving, and migration from the rest of Henan province may continue to feed its factories, but Zhengzhou's organic growth drivers are still in short supply.

FT Confidential Research previously visited Zhengzhou in 2012 to investigate a new development zone that had become a byword for Chinese over-investment. But Zhengdong New Area is now bustling. On a recent weekday evening, 13 of the 17 restaurants on Tianze Street, one of its main thoroughfares, were fully booked. Cushman & Wakefield, a property manager and consultancy, estimates Zhengdong's office vacancy rate fell to 29.5 per cent in the first half of this year, from 33.6 per cent in the second half of 2016. This is more than double Shanghai's but impressive for an area written off four years ago as another of China's "ghost cities".

The Henan government filled Zhengdong by edict; 12 universities, including 180,000 students and faculty, have moved here, as have more than two dozen provincial and city government agencies. One of China's three national centers of commodities trading is now located in Zhengdong, as are most of Zhengzhou's state-owned financial institutions - the eventual success of Shanghai's Pudong financial district has proven intoxicating to Chinese local government officials.

The Zhengzhou Airport Economic Zone, a bonded area allowing the tax-free export of goods assembled nearby, is the centerpiece of the city's attempt to take business from traditional manufacturing hubs on the east coast. The city government has reportedly lavished incentives on Foxconn, the key local employer, to make Zhengzhou a center for the assembly of iPhones.

From the country to the city

Zhengzhou's growth has been helped by migration from the rest of Henan. The province is one of China's most populous but least urbanized. By the end of last year, 51.5 per cent of its 95m registered residents still lived in rural areas, well above the national average of 42.7 per cent (see chart). Zhengzhou's growth is hitting constraints. Job applications submitted by migrant workers fell 38 per cent in the first five months of this year, according to the Zhengzhou Human Resource Market. Labor officials here said elevated housing costs, relatively low wages and the difficulty in obtaining a hukou are putting them off. Pollution is also a deterrent; Zhengzhou's air quality is worse than that of other Chinese cities (see chart). Graduates are less willing to stay after university to find jobs. Zhengzhou Talent Market, part of the city labor bureau, estimates that just 50.4 per cent of the city's 2017 class are looking for opportunities here, down from 69.2 per cent last year.

Zhengzhou has been called "China's Chicago", but so have many other central Chinese cities, some more deservingly. Nearby Wuhan poses considerable competition in human and capital resources - it boasts one of China's top universities and Foxconn is reportedly considering building an R&D center there - while, further afield, cities like Chengdu and Chongqing are developing more quickly and in optimum sectors.

Wen Hua, an academic at the Henan Agricultural College, said Zhengzhou was not generating the right kind of white-collar jobs to attract his students. The city's service sector is developing - it grew 11.1 per cent last year versus the national average of 7.8 per cent - but cannot absorb university graduates. Mr Wen estimates just five of his 60 most recent graduates have found jobs in Zhengzhou.

Compared with similarly sized cities, Zhengzhou appears to have been overly reliant on fixed-asset investment as a driver of growth (see chart). The central government's attempts to rein in credit-fuelled investment have slowed Zhengzhou's economy. 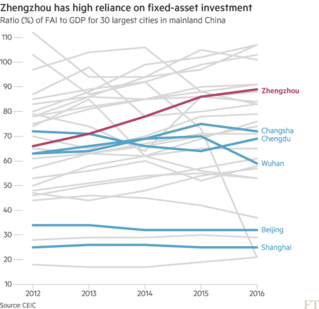 Developing organic growth beyond the housing market has proven difficult. Officials are re-zoning parts of the city's largely empty high-tech park to turn factory space into apartments. In Zhengzhou Greenland Plaza, Zhengdong's tallest building, rents have fallen by half over the past five years. The oversupply problem has been exacerbated by a crackdown on unregulated financial services, which has led to a wave of closures and a glut of office space.

Demand for infrastructure investment funding is meeting resistance from bankers acting under orders from headquarters in Beijing to rein in spendthrift local governments. Smaller, private companies are the most vulnerable as credit tightens. An executive with one of China's "big four" state banks said he had stopped doing business with the 10 small firms on his books, with most of the bank's lending quota allocated to China State Construction Engineering Corp, a state-owned conglomerate.

Housing to the rescue?

As with so many Chinese cities, the housing market has been crucial to growth. Local agents say house prices in Zhengzhou rose anywhere from 60 per cent to 100 per cent over the past year. New housing starts, measured by area, jumped 48 per cent in the first half, even though banks and trusts in the city say they have tightened lending for new developments.

This investment boom may mean another batch of empty apartments but, as with the previous cycle, buyers will eventually emerge, said Zhu Guang, vice-director of the Zhengzhou branch of Vanke, one of China's biggest developers. Like other developers in the city, he thinks housing controls will be loosened within two years because the local government recognizes that it needs a robust housing market to drive Zhengzhou's growth rates.

This article was first published on September 18 by FT Confidential Research.