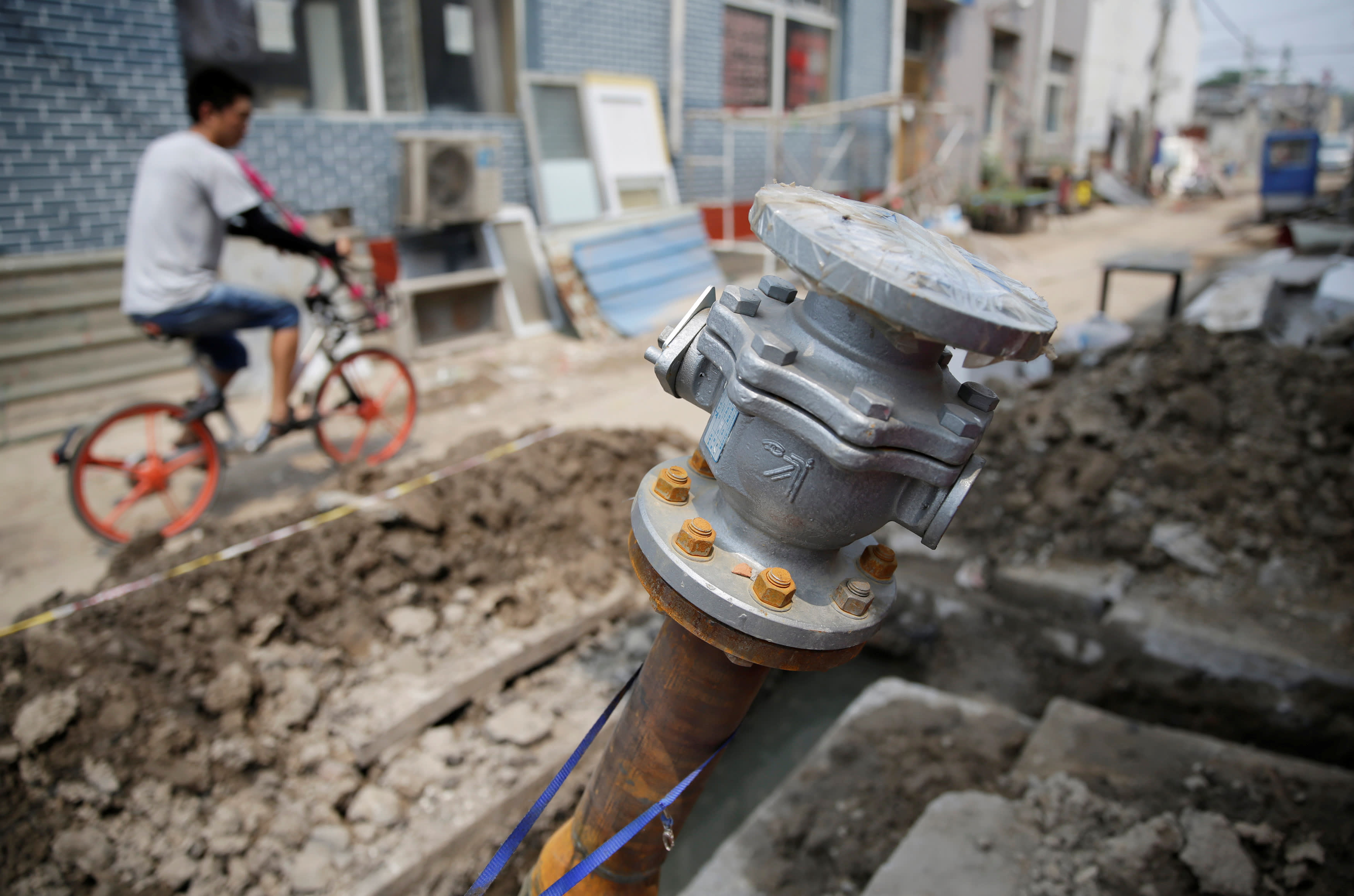 A villager cycles past a gas pipeline construction project in Xiaozhangwan village of Tongzhou district, on the outskirts of Beijing, on June 28, 2017.   © Reuters
Economy

SHANGHAI -- Earlier this year, Long Pao, a small farming village which provides vegetables to the city of Nanjing about 50km north was labeled a "discredited" debtor by a court for failing to pay 4 million yuan ($601,200) for its public communications facilities.

The label "discredited" literally means a loss of credibility. When an individual is so labeled, he or she is prohibited from using airplanes and railways, and from traveling and playing golf. In the case of a local government, it is the government head who is punished.

Public officials should be worried, as local governments groan under mounting debts as a result of heavy public spending to prop up the economy. Longpao Jiedao, a village about 50km north of Nanjing, is one of the Chinese local governments that was blacklisted as "discredited debtor." (Photo by Yusho Cho)

In more than 5,000 cases, local governments and affiliated companies have defaulted on their debts, said Lian Weiliang, deputy head of the National Development and Reform Commission, during an economic forum in Hangzhou in July. In one case, a small municipality had outstanding debt of 324 million yuan.

Ahead of the Communist Party convention in October, held only once every five years, priority has been given to propping up the economy over maintaining credit soundness.

In the first eight months of this year, infrastructure investment -- excluding that for generating electricity and other forms of energy -- jumped 19.8% from the same period a year earlier, to about 8.5 trillion yuan.

On behalf of cash-strapped local governments, companies have taken on funding road-building and water-treatment facilities under the public-private partnerships. They then collect the money invested through usage fees.

But concerns have been growing about such partnerships.

Last year, the government of Hunan Province noted that some smaller municipalities provide guarantees for their operations, distorting the true nature of the public-private partnership scheme.

PPP encourages companies to make investment judgments after gauging profitability. But few lucrative infrastructure projects are left. If local governments guarantee companies' revenues, the governments will eventually have to pick up the tab for underperforming operations.

Yet the central government and the Communist Party have stimulated the economy despite these risks. After the Communist Party convention ends in a few weeks, emergency support may no longer be seen as necessary. As growth of property and public investment slows, local governments will need to find ways to cope with the hangover from the excessive stimulus spending.

These local concerns are having an impact at the national level. On Sept. 21, S&P Global Ratings downgraded China's long-term sovereign credit rating to A+ from AA-.

"Some local government financing vehicles, despite their diminishing importance, continue to fund public investment with borrowings that could require government resources to repay in the future," S&P said in its statement.

"The downgrade reflects our assessment that a prolonged period of strong credit growth has increased China's economic and financial risks."

The downgrade followed a similar one by Moody's in May.

The Ministry of Finance shot back with a long rebuttal of S&P's downgrade the following day, but the reasons for it are hard to ignore. Meanwhile, market attention is focused on economic data to be released after the Communist Party convention in the autumn.