China's curbs on imported waste sow turmoil in the market

TOKYO -- China's restrictions on imported waste are squeezing the market for recycled materials such as used paper and copper scrap, depressing prices, threatening a supply glut, and forcing exporters to seek new markets.

From the beginning of May through early June, China has imposed a "temporary" ban on imports of waste paper from the U.S. The move followed the adoption of tougher limits on impurities in foreign waste earlier this year in the name of protecting the environment.

However, the virtual ban on used paper is widely seen as a poke at the U.S. while a solution to trade frictions with China remains out of reach.

Having lost access to the Chinese market, some recycled materials are finding new export markets in Southeast Asia and elsewhere. But fears of a supply glut are rising.

Beijing imposed its ban on U.S. waste paper by announcing tougher inspections on exports, even though they were already subject to pre-shipment inspections by Chinese officials.

Since the start of the year, China had prohibited imports of unsorted paper waste containing high levels of impurities. In March, it cut the cap on impurities to 0.5% from 1.5%. 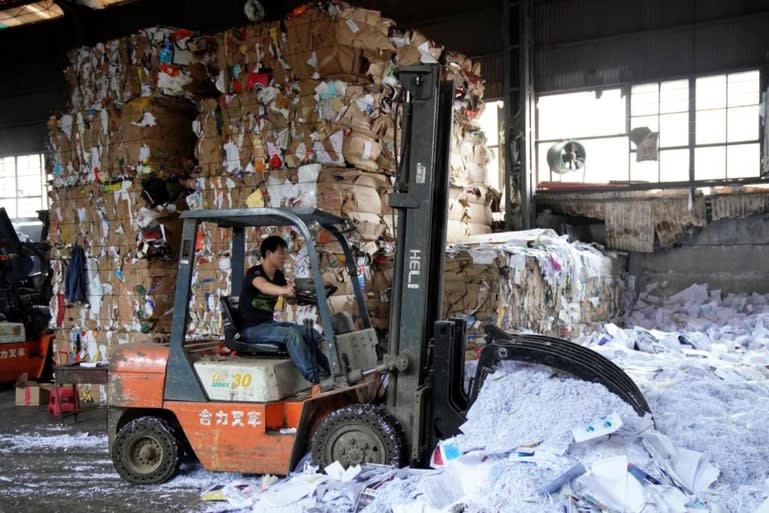 A forklift sorts paper products at a recycling station in Shanghai.   © Reuters

China said the ban on imports from the U.S. was based on inspections that found many cases in which used paper products failed to clear the new impurity limits. Many analysts said U.S.-China trade friction was behind the move.

The U.S. accounted for 45% of China's total wast paper imports in 2017, compared with 10% for Japan, according to the Japan Paper Exporters' Association. Unsurprisingly, the decision by the world's largest used paper consumer to ban imports from world's largest supplier has had a major impact on the market.

International prices of waste paper have languished. As of July 2017, prices of used cardboard exports from Japan had risen to an all-time high, but began falling in the wake of China's import restrictions. Currently, distribution prices in Japan stand at 10 yen (8 U.S. cents) per kilogram, down 2 yen, or 17%, from their peak last summer. By volume, Japanese exports of used cardboard to China decreased by around 40% in January-March from a year earlier. Exporters are increasingly redirecting their shipments to Southeast Asian markets such as Vietnam and Indonesia.

China is also toughening its import restrictions on low-grade copper scrap from the U.S. According to China's General Administration of Customs, since the start of the year, "multiple" U.S. scrap shipments have failed to meet tough new environmental regulations.

Again, the move takes place in the context of U.S.-China trade tensions. But China is also trying to reinforce its domestic recycling industry as part of its national policy, according to Sumitomo Metal Mining.

China imported a gross total of about 3 million tons of copper scrap in 2017. Of this, low-grade scrap accounted for about 50%.

For the U.S., copper scrap "has nowhere to go, and so may be staying in the country in many cases," said Yoshikazu Watanabe, president of the Japanese nonferrous metals consultancy Tsukushi Shigen Consul.

In Japan, moves are afoot to take advantage of China's ban on U.S. waste paper imports. Chinese prices for waste paper used to make cardboard are nearly three times higher than in Japan, as demand is strong and likely to increase.

"Demand for high-quality Japanese used paper should increase in China," said Nobutaka Okubo, head of the Japan Recovered Paper Association, which consists of more than 100 waste paper wholesalers in the Kanto region around Tokyo.

Meanwhile, competition to ship copper scrap to Southeast Asian markets is expected to intensify, as U.S. and Japanese exporters seek to expand their exports to the region.

From Japan, exports of copper scrap fell by almost by half in the first quarter of 2018 from a year earlier to 380,000 tons. The country started exporting to Indonesia, Cambodia and Pakistan, and exports to Malaysia have soared nine times.

Japan's shift to exporting copper scrap to Southeast Asia has even led to Chinese business interests setting up a company in Japan to ship copper scrap to the region in small volumes, said Hisashi Yamaguchi, CEO of Sanpoh Bussan, a copper scrap exporter.

But developing new markets takes time. Currently in Japan, an estimated nearly 10,000 tons of copper scrap cannot be exported and is being kept as industrial waste.

"In the past, coated copper wire scrap could sell for 5 to 10 yen per ton, but now we we pay tens of yen to discard it," said Kyojiro Goi, CEO of the nonferrous metal scrap wholesaler Goi-Kinzoku.